2013 WNBA Playoffs: How the Indiana Fever beat the Chicago Sky

The fourth-seeded Indiana Fever beat the top-seeded Chicago Sky 79-57 yesterday to sweep their first round series and advance to the Eastern Conference Finals.

Share All sharing options for: 2013 WNBA Playoffs: How the Indiana Fever beat the Chicago Sky

There was one thing that the Chicago Sky absolutely, could not under any circumstances allow to happen (under penalty of postseason death) in their first round series against the Indiana Fever: get outshot.

Making matters worse, the Sky not only got oushot, but also shot terribly from just about everywhere.

The Sky went just 4-for-17 from beyond the 3-point arc during the two-game series while star center Sylvia Fowles went just 12-for-26 (46.15%) from the field, which had to be particularly frustrating given that every single one of her shots were taken in the paint (20 of which were taken in the restricted area). And given the combination of the infrequent 3-point attempts and players that like to take jumpers, it's safe to assume that they took a number of mid-range jumpers.

Seeing the Sky struggle with shooting wasn't exactly a major surprise: they were only an average efficiency team this season and had a tendency to fall into the trap of drifting out to perimeter independent of how well Fowles was playing. The bigger problem was that they simply couldn't find a way to stop the Fever from anywhere.

Four Factors statistics from the WNBA semifinal series between Indiana and Chicago.

In what at times looked like a highlight reel from last year's playoff run, the Fever thrived by spreading the court to hit threes and create space to utilize an assortment of drives, backdoors, and pick and rolls. They shot 46.87% from the 3-point line, way above their 33.7% mark during the regular season. And, again like last season, everybody who touched the floor for Indiana seemed to be hot: rookie Layshia Clarendon, who had been struggling all year to find confidence with her shot at the pro level, shot 6-for-10 for the series. Karima Christmas, who has never really been known for her shooting stroke even dating back to her days at Duke, shot 7-for-12 in Game One while 2013 Most Improved Player Shavonte Zellous looked unstoppable in Game One shooting 7-for-11 and 3-for-3 from the 3-point line.

Yet no star came up bigger for the Fever than perennial MVP candidate Tamika Catchings.

Catchings is one of those players who doesn't have to shoot well to impact a game, which is what made her such a strong MVP candidate even though people normally look at statistics first for that award.

First, her role in that shooting efficiency story was critical: she was partially responsible for holding 6-foot-5 2013 Rookie of the Year Elena Delle Donne to 2-for-11 shooting in a Game Two blowout.

As big as shooting efficiency was to the Fever's victory, rebounding was also extremely important.

Despite being undersized - and having painfully little depth this season - the Fever managed to be the second-best offensive rebounding team in the league during the regular season, a testament to the heart this team played with. So winning the rebounding battle against the first place Sky should not necessarily come as a huge surprise. But rendering the Sky almost entirely ineffectual on the offensive boards was indeed surprising, especially because the numbers suggest it was almost entire the doing of the 6-foot-1 duo of Catchings and Erlana Larkins.

To put the Sky's offensive rebounding figure in perspective, the Phoenix Mercury had the lowest offensive rebounding rate in the league during this regular season at 24.6% - the Sky didn't even cross the 20% threshold in either game. That offensive rebounding ability was important to the Sky all season because it helped mitigate their so-so shooting efficiency and suspect shot selection; with both Delle Donne and Fowles off their games and their inability to get second chance shots, the Sky were doomed.

Larkins was obviously huge in that effort, but less so in terms of the offensive rebounding prowess that she showed last postseason that her defensive board work: whereas Catchings crossed the 40% threshold for defensive rebounding in Game Two, it was Larkins approaching that level of dominance in Game One with a 38.09% defensive rebounding percentage. Size doesn't matter when two players are rebounding at that level - the fact is that the Sky were thoroughly outworked on both ends of the floor and a subpar effort is why they're going home as much as anything else.

It came down to one team simply being tougher than the other.

"No one in our locker room would make excuses," Sky forward Swin Cash said, according to Sky release. "The playoffs are about toughness, mental toughness. It's not about age. Indiana executed their game plan, and we weren't doing what we were supposed to do. Some people learn through toughness and battles that they have gone through."

A disappointing end for the Sky

Normally for these series recaps I'd highlight a player from each team, but it's really difficult to do that for the Sky. The player who ended up best statistically was Fowles, who - as mentioned above - was struggling to make shots within five feet (shooting under 50% close to the basket is not a positive). Delle Donne was clearly important to whatever successes they did have in the first game, but her second half shot chart (and the fact that she didn't even attempt a free throw shot) tells the story of how well the Fever defended her. 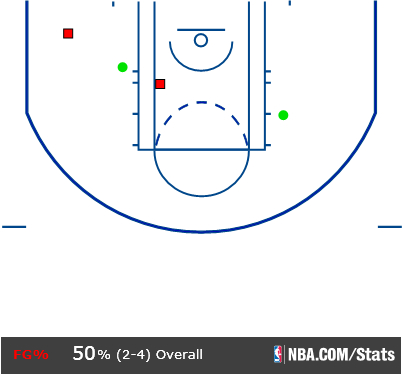 Elena Delle Donne's second half shot chart in Game Two of the first round against the Indiana Fever.

Without going into detail, it probably goes without saying that the Sky's backcourt wasn't able to pick up the slack, but point guard Courtney Vandersloot was a player who had to have a big series for them to win and she came up short: she ended up with a pure point rating of 0.00 for the series.

After finishing first in the Eastern Conference during the regular season, the Sky are now left with a litany of questions for their offseason from top to bottom though there might be two ways to look at the loss.

Optimistically, Chicago basketball fans might be reminded of the path the Chicago Bulls took to championship dominance and consider this a matter of growing pains.

Now it's about taking the next step for @wnbachicagosky. Remember: Once the @chicagobulls FINALLY beat the Pistons, the flood gates opened.

But more pessimistically - or perhaps realistically - one might take a look at what happened in this series and see multiple problems that require proactive change rather than patience because, as Cash said, a first place team doesn't get handled like that simply due to youth. When a shorthanded opponent can take a team out of their game that completely, it's time to consider some significant changes.

For a look back at the profiles of these two teams from the regular season, check out our series storystream.