2013 WNBA playoffs preview: Why the Indiana Fever beating the Chicago Sky shouldn't be considered an "upset"

The defending champion Indiana Fever find themselves as a fourth seed in the 2013 WNBA playoffs matched up against Elena Delle Donne, Sylvia Fowles, and the top-seeded Chicago Sky in the first round. Nevertheless, an Indiana Fever win shouldn't be considered an upset.

Share All sharing options for: 2013 WNBA playoffs preview: Why the Indiana Fever beating the Chicago Sky shouldn't be considered an "upset"

Similar to their opponent in the 2012 WNBA Finals, the Indiana Fever's season has been somewhat overshadowed by the hype surrounding other players in the league and a whole bunch of injuries.

There's no question that this has been a rough regular season for the Indiana Fever. And there was every reason to think that they would end up in the 2014 WNBA draft lottery by the way things were going early-on.

But falling into the fourth seed and facing the Chicago Sky in the first round might have been a blessing in disguise: despite all the discouraging news they faced this season, one bright spot was that they won their season series with the Sky 3-1.

Although the Sky have put up the type numbers that suggest they're a contender, a Fever win in this first round meeting should not at all be considered an "upset". The fact is that with the Fever healthier now than they've been just about all season, this first round match up with Chicago could very well produce the Eastern finalist.

The other day on Bright Side of the Sun's podcast, I discussed just that and the 2013 WNBA playoffs in general with host Kris Habbas (who covers the Phoenix Mercury). To keep a long story short, it wouldn't be at all surprising if we saw a rematch of the 2012 WNBA Finals this year.

This one is obvious and please forgive the bias: I've had Tamika Catchings as a top 3 MVP candidate for three of the last four seasons, including 2013.

Personally, I find it really difficult to accept her as the seventh most valuable player in the league.

But rather than just ranting on about it, I'll just use a pie chart to illustrate the point. 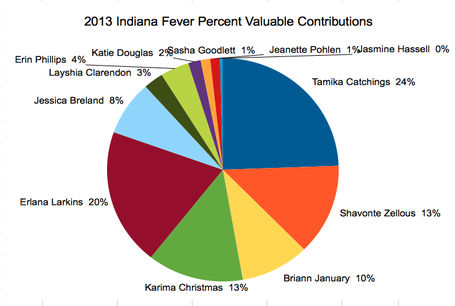 Percent Valuable Contributions (PVC) is the percentage of a team's overall statistical contributions (measured by Model Estimated Value) that a player accounts for. Catchings 24.43% was a league-high this season, narrowly edging Sylvia Fowles (fourth in MVP voting) and Angel McCoughtry (fifth).

If the Most Valuable Player award has anything to do with the player who contributes the most to their team, it's hard to just ignore that.

We can debate the merits of using PVC (or the underlying MEV) for the WNBA. We can even debate how much to read into that chart for the Fever: with all the injuries they had, the reasoning might go, that chart is less a reflection of her individual talent than the fact that the top three players on the team missed games.

But consider the entire context of this thing: those other MVP candidates who ended up in the top five had at least one teammate who received a MVP vote. The Fever's second-best player was 4.6% behind Catchings. Furthermore, it's hard to account for the value of a player who can defend almost anyone in the league and starts at power forward at 6-foot-1 for said injury-riddled team.

So perhaps we can excuse the pedestrian 50.81% true shooting percentage: Catchings more than pulled her weight and is the reason the Indiana Fever are in the playoffs at all right now given the injuries they sustained. It's a tough argument to beat and any notion that she doesn't have MVP statistics is preposterous.

Catchings helps to anchor the team's fifth-ranked defense with that team-high steal percentage contributing to their league-high 19.4% opponent turnover rate and a solid fourth-best points off turnovers (16.38 per game).

Without Breland and Jessica Davenport out for the season with an injury and 2012 first round pick Sasha Goodlett released earlier in the season, the Fever will enter the postseason with two post players: Larkins and rookie Jasmine Hassell, who hasn't even spent the whole season on a roster and hasn't been a strong rebounder in limited minutes. In theory, that would make it rather difficult to win while playing at the slowest pace in the conference.

The other challenge: they had the third-lowest shooting efficiency in the league this season (43.6%), edging out the New York Liberty and Connecticut Sun.

Part of that low shooting efficiency is certainly a matter of losing so many perimeter players throughout the season to injury. Though they returned their core from their 2012 championship roster, they rarely had all of them on the floor. And without those pieces on the floor, their 3-point percentage dropped from a league-high 40% last season to just 33.69% this season; with a depleted perimeter game and so few true post players to score in the paint, their offensive output can certainly sputter at times.

It's hard to know what exactly Katie Douglas will provide the Fever, but it should be pretty obvious to see where she might be needed: scoring.

Douglas is a career 36.8% 3-point shooter and had shot 39% or better since 2010 before missing the majority of this season. If she can give the team anything close to that career average, she'll be an asset to the Fever (and in helping boost that scoring efficiency, possibly make up for the rebounding they lost in Breland).

Even if she doesn't find her stroke for a while, just providing the team with an alternate ball handler could be significant: it's not uncommon for Catchings and Douglas to be the team's most efficient ball handlers in past years and adding Douglas to the rotation could help take some pressure off of Briann January, who has been inconsistent at times this season.

Key to victory: Turn Chicago into a jump shooting team

The Fever beat Chicago twice this season without even outshooting them. In fairness, the Sky were playing with Elena Delle Donne recovering from injury in one and without Courtney Vandersloot in another, but nobody really has the right to complain about absences while losing to the Fever this season.

Statistically, there wasn't really any commonality between those games, but one thing did stand out: in one game (Aug. 6), Epiphanny Prince and Courtney Vandersloot combined to shoot 5-for-16 (31.25%) from the field. In the other game (Sept. 6), the Sky had a free throw rate of 25%, which is well below their league-high 32.6% free throw rate for the season. The Sky shot 36.7% and 40% from the field, respectively, in those two games.

The point is not that the Fever need to repeat either of those performances - in fact, all three of their wins against the Sky were somewhat different. But they'll put themselves in a good position to win if Chicago is bombing away from the perimeter while playing a lot of one on one ball.

Why to root for the Fever: Heart

Even though the Sky are favored by most to win this series, it would be hard to call it an upset given that they've already beaten them three times without a full roster. So there isn't quite the standard underdog narrative going on here.

Obviously, the Fever like to force turnovers this season - it's the best path to victory for a team struggling with its shooting tough. But it's also noteworthy that neither of these teams commit turnovers very often: they had the two best turnover rates in the Eastern Conference this season.

Controlling the ball is probably more important to the Fever: they can't just expect to overcome turnovers with second chance points and hot shooting - they really do need to hold on to the ball and make the most of every trip down the floor. But if the Fever can force turnovers, they've accomplished two things: first, they're keeping the ball away from Sylvia Fowles (team-high 62.25% true shooting percentage) on the interior. Second, they're giving themselves transition opportunities.

In any event, something has to give between these otherwise solid ball handling teams and it's an opportunity for one of them to gain an advantage.

This should be a fun series: we haven't seen these two rosters up against each other at full strength in 2013. The Fever have been missing someone in every game they've played and the Sky were absent key players in two of these meetings.

In the end though, this comes down to game planning and Lin Dunn has gotten the job done in three of four tries against the Sky this season, winning two in Chicago. With the addition of Katie Douglas, that's just one more scoring weapon to help the Fever overcome their biggest weakness.