2013 WNBA Sixth Woman of the Year candidates: Monica Wright's emergence as a front-runner

In our weekly look at individual WNBA statistics, we come back to the Sixth Woman of the Year race in which Minnesota Lynx guard Monica Wright has become a top candidate.

Share All sharing options for: 2013 WNBA Sixth Woman of the Year candidates: Monica Wright's emergence as a front-runner

After I made my first Sixth Woman of the Year Award candidates list of this season and proclaimed that the candidates on that list would probably produce the top statistical candidate at the end of the year, I received an email that opened with a question that I had actually asked myself when putting the list together.

"No love for Monica Wright in your Sixth Woman of the Year article?"

It was a fair question, especially considering that Shenise Johnson was not only included on the list but also one of the top candidates: neither Johnson nor Wright was shooting well, but Wright had a significant advantage in steal percentage (3.2 for Wright vs. 2.6 for Johnson) and free throw production rate (36.36 vs. 8.69) by the formulas I'm using. The difference between the two came down to Johnson being exceptional rebounder for her position (oreb% of 9.8% vs. 4.7% for Wright) and turning the ball over half as often (7.7% turnover ratio compared to 14.53% for Wright).

Since that point, a whole bunch of things have changed to help vault Wright to the top of the list and push Johnson down a few spots.

First, Wright had an outstanding July, boosting her scoring average three points per game while shooting 46% from the field and (briefly) rectifying that efficiency problem while also improving her assist to turnover ratio. Second, Johnson was moved into the Silver Stars' starting lineup at the beginning of July and while she improved her field goal percentage to 44.2% her 3-point percentage hasn't been above 30% since and she's averaging less than an offensive rebound per game. Third, due to the Silver Stars' injury troubles - Becky Hammon and Sophia Young out for the season as well as DeLisha Milton-Jones going down with a knee injury - both Adams and Johnson could end up being disqualified for the award due to having too many starts.

With the rest of that early-season list falling victim to injury or regression to the mean - and other top candidates moving into the starting lineup for one reason or another - the list you're about to see is completely different.

How do we identify Sixth Woman of the Year candidates?

Criteria for the Sixth Woman of the Year Award 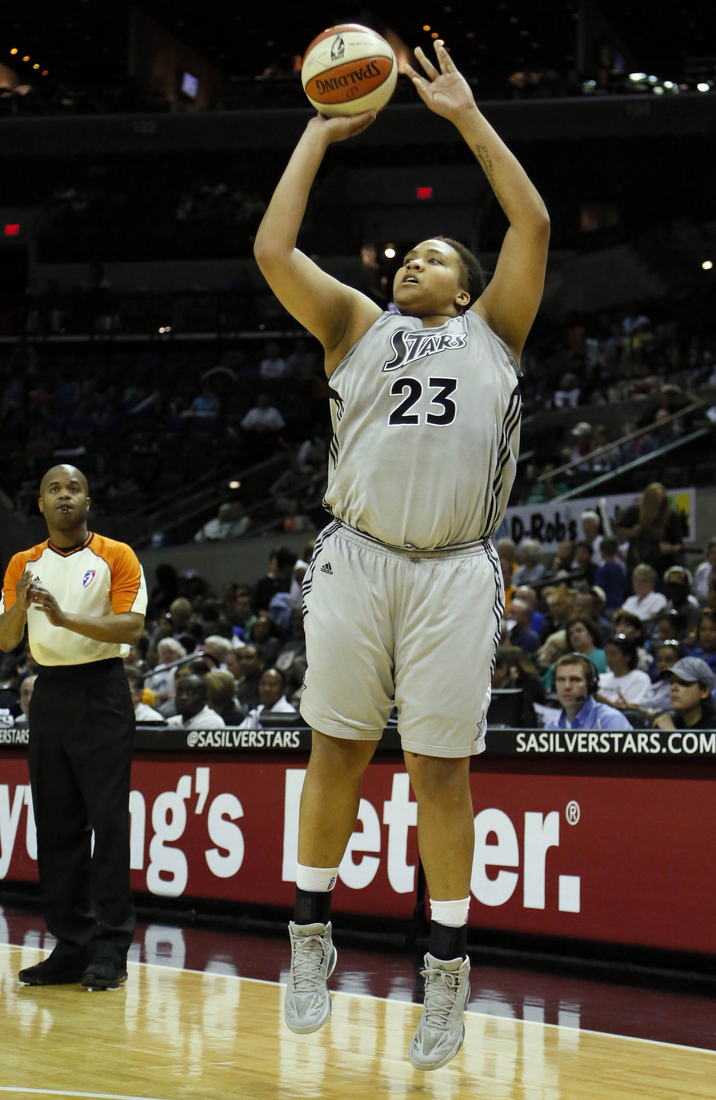 The official criteria for the WNBA's Sixth Woman of the Year award is simply that a player must come off the bench in more games than they start. But of course we have statistical standards too. You can click here and here for more description of the statistics for this award, which are laid out in the table below.

One of the reasons I felt comfortable saying an early season list would be sufficient for identifying the top end-of-season candidate might be obvious: by that time, rotations and minutes start to get pretty clear, which automatically narrows the field a bit (barring injury). Then it's just a matter of how well players fit their roles.

The other reason for that bold proclamation is circumstance: over the past few years, early candidates included DeWanna Bonner or someone from the San Antonio Silver Stars who have ultimately dominated the top candidates lists over the last few years (not to belabor an old point, but 2012 award winner Renee Montgomery was arguably not the top candidate on her team last year statistically although her value to the Connecticut Sun off the bench should be clear by now).

However, there might be a few reasons for the dramatic change in the candidates list this season - aside from sample size - that are neatly captured in that comparison between Johnson and Wright.

First, injuries have pushed a number of players that would otherwise be top candidates into their team's starting lineup. Second, a number of players got off to surprisingly fast starts that they simply didn't maintain for one reason or another. And third, Wright finally adjusted to increased ball handling off the bench with former ball handler Candice Wiggins moving on to the Tulsa Shock.

Statistics for the top reserves in the WNBA

Unfortunately, if you search the web for "Monica Wright" you're more likely to get news of her engagement to NBA superstar Kevin Durant than anything about her performance on the court. But the numbers reveal that she's been quite effective in her role this season.

Top 15 reserves for 2013 WNBA season as of 8/7/13. (Click here for an explanation of the numbers)
* Player is currently starting
** Currently injured

Just looking at those numbers, the top three candidates should be pretty clear so there's not much need to go through the entire list (feel free to discuss in the comments if you wish). But there are two additional players who probably deserve mention so we'll go through a top five.

The top Sixth Woman of the Year candidates

5. Mistie Bass: In a way, this is a repeat of last season: Bass stood out statistically as the Sun's top reserve then as well even though Renee Montgomery ultimately won the award. And if there's anything that gives her a chance of winning it this year is that she makes the most of her relatively limited minutes on the floor â€“ she's contributing as much or more to her than some players with 5-10 more minutes in terms of her percentage of the team's overall valuable contributions (PVC). Of course that's a double-edged sword â€“ she's playing limited minutes on a team that is struggling to keep itself out of last place.

4. Riquna Williams: For better or worse, Williams has been exactly the type of player she was projected to be coming out of college. And she's probably a better fit for the Tulsa Shock than any team in the league. We've already discussed this before around here, but one of the Shock's problems is a lack of shot creators. Williams can get shots effortlessly, which is a skill unto itself. That might not seem like a positive on a team that struggles with shooting efficiency to begin with, but she's a great change-of-pace player who can give the Shock a boost off the bench. In that regard, she's very much a player who is more valuable than her numbers suggest.

3. Leilani Mitchell: The argument against Mitchell might be clear to her detractors: her 13.28% usage percentage makes her essentially a non-factor as a scorer and a 1.83 pure point rating is sub-standard compared to the rest of her career. Nevertheless, she has an astounding 67.51% true shooting percentage due in large part to a 50% 3-point percentage. As Ray Floriani reported recently, playing her more often could help the Liberty need to spread the court and open up the Liberty's struggling offense.

1b. Monica Wright: Statistically, Wright is buoyed by her improved shooting in July, but it's also worth noting that having a PPR that's not negative â€“ it's 0, but that essentially means she's not hurting the team - as someone who is growing into handling the ball more often is a good sign. While that efficiency comes primarily from decreasing turnovers rather than being a dynamic facilitatory, there are some starting point guards in the WNBA this season who have been only barely more efficient ball handlers than Wright. So that ability to handle the ball and defend the wing position makes Wright a valuable asset off the bench, whether she's playing with Whalen or has the ball in her own hands. The only thing that might be holding Wright back is that she doesn't have the major statistical strengths that others on the list have, but what she brings to the team goes a bit beyond that.

1a. Danielle Adams: If Adams were to start the remainder of the Silver Stars' games this season, she would be ineligible for the Sixth Woman award as someone who has started more games than they've come off the bench. But if for some reason she returns to the bench â€“ she only began starting when DeLisha Milton-Jones went out with injury â€“ she'll still be in the running and it would be hard not to choose her based on the numbers above.

In Adams, you're talking about a player who leads her team in scoring while being moved around the rotation in a chaotic injury-filled season for the Silver Stars and continues to maintain a solid scoring efficiency (53.89%) while being a volume shooter for her team (team-high 25.35%). When you add that to what she does as a rebounder (15.42% defensive rebounding percentage, second-highest on her team) on a poor rebounding team, she's a significant part of the Silver Stars' success.

Yet one thing that might be held against Adams is that the Silver Stars haven't been all that successful this season: although they've kept themselves in game with solid ball movement and relatively strong discipline offensively, they often just don't have enough to turn close games into close wins. In contrast, Wright has been a key contributor to a winning team, independent of whether Adams is eligible. MVP is constructed to overcome this very dilemma by accounting for players who make big contributions on poor teams and in this case it favors Adams by a significant margin. But what Wright has done on both ends of the floor for a winning team (that could be considered dominant by the time all is said and done), might help establish a stronger case than the statistics can for Adams.