The Seattle Storm went into the U.S. Airways Center and beat the Phoenix Mercury, who lost DeWanna Bonner and Brittney Griner to injuries in a crucial home game between playoff contenders.

It's hard not to start with expectations after the Seattle Storm's 80-65 win against the Phoenix Mercury tonight.

Maybe a few people here and there did have the Seattle Storm as a playoff team this season, which was perfectly reasonable given all the uncertainty at the bottom of the Western Conference. But I challenge you to find anyone who figured they'd be competing with the Phoenix Mercury for third place with Sue Bird and Lauren Jackson out with injuries for the season. And winning the season series against the Mercury was nearly unthinkable.

With tonight's win, they've done both.

The Storm are now with half a game of the Mercury for third place in the Western Conference and have already clinched the head-to-head season series by beating the Mercury for a third straight time. Yet as stunning as that might be, it's an even bigger testament to the way the Storm have played throughout the season: disciplined, defensive, gritty basketball with a never say die attitude.

It's not always pretty - the Storm can go through some vicious cold streaks and the turnovers that have plagued them at times over the last two years continue to bog down some of their games this season - but you can usually count on this team continuing to fight whether they're down 30 or up 20 it's hard not to appreciate their will to win in a season when nobody expected them to much of it.

Tonight, it was the guard play that stood out.

Former Mercury guard Temeka Johnson was fearless in attacking the basket, scoring 10 of her 12 points in the second half while rookie guard Jasmine James was attempting to defend her. Meanwhile, Tanisha Wright scored a game-high tying 19 points while helping to hold Mercury All-Star Diana Taurasi to just 9 points on 2-for-11 shooting.

Of course, the defense on Taurasi was a team effort.

"I think part is our defense, part two is that Diana probably wasn't being as aggressive as she usually is," said Storm forward Tina Thompson in a Mercury release after sharing game-high scoring honors with Wright. "I don't know why. Maybe, it was just us playing in her space. In my opinion with a player like Diana, you are never going to be able to completely stop her. She just has too many weapons, as well as her basketball intellect. It's really high. To keep her completely out of the game, it's tough. That's why we concentrate so much on being in our space."

And part of the reason the Storm were able to blow the game open in the third quarter was that they kept moving without the ball and attacking the basket on offense, forcing All-Star rookie Brittney Griner to defend players in space. 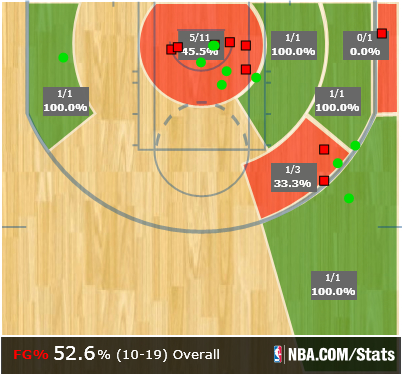 11 of the Storm's 19 third quarter shots were right around the basket and they made 3 of the 5 threes they took, most of which came in the rhythm of the offense. Add 10 free throw attempts and you have the profile of an aggressive team that was finding ways to get themselves to the basket despite the presence of a 6-foot-8 center roaming the middle.

Yes, the injuries to DeWanna Bonner and Brittney Griner probably did affect the final score, but the Storm could've won even if they had been able to finish the game: they were up 10 points when Bonner went down with a reported knee sprain with 4:44 left in the third and still up 8 when Griner went down.

Ultimately, the story here is that it was an extremely impressive performance by the Storm who have made this Western Conference playoff race far more interesting than most of us imagined.