Open Thread: Doubleheader at 7:00 PM ET all on ESPN's networks

Do NOT watch LiveAccess. Go to WatchESPN.com for BOTH games for online viewing, and one is on ESPN 2.

Share All sharing options for: Open Thread: Doubleheader at 7:00 PM ET all on ESPN's networks

The Random SB Nation Song of the Day: Here's Keith Urban with "Little Bit Of Everything." I used to abhor country music, but now I actually have a good amount of country music on my iPhone and Spotify.

This is only on WatchESPN.

Today Tayler Hill and the Washington Mystics will root for the team they just swept this season, the best team in the league. Nationally, the Mystics don't matter, so the storyline is that this is the second rematch of the 2012 Finals with the Lynx winning the match in Indy which was a kiddie game during the 2013 season .

This is on ESPN 2 but on WatchESPN as well if you have the right cable provider.

These two teams have three more games left to play with the Dream winning the first match back in June. If the Dream wants to snag that number one seed which looked inevitable last June, win three out of four vs. Chicago and that should be interesting to see how close they'll be in the standings. Keep in mind that though the Sky has 19 wins and the Dream only 14, the Sky played 27 games and Dream only 24 so they're closer than it may appear at first glance.

Yesterday, I got a note on complimentary Mystics tickets. 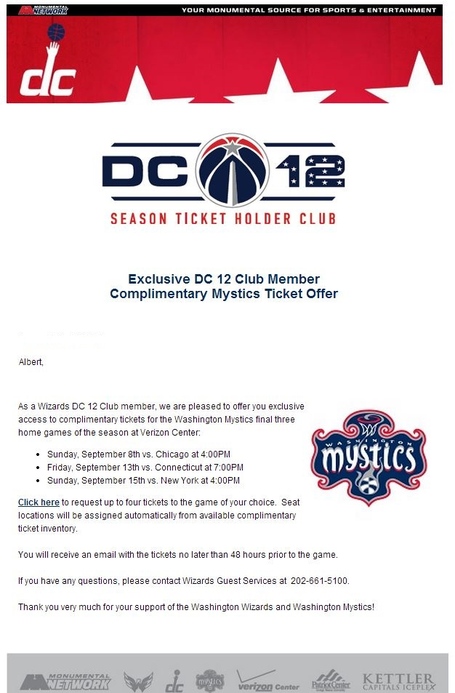 I forget if there was just one Wizards STH night for the Mystics, but this year it's three apparently... That's not good from the standpoint that the Mystics can't sell tickets. Why? Because as I've whined for awhile, no A List star is on this team, besides Mike Thibault, but this is a players' league, not a coaches' league. Some believe that maybe more folks will come if the Mystics are in playoff contention. They are, but still not too many folks are showing up. If they do make the playoffs, I expect another sparse crowd to be honest. Despite my pessimism, I mean realism, I do believe that crowds will be better for 2014 on.

And no I'm not getting comp tickets. I already have a ton from the Mystics side, all of which I gave away or donated. I wonder what club name they're giving them, if at all.

So that's all I have on my plate. Enjoy the games!