Open Thread: Two games for Tuesday, starting at 7:00 PM ET including one on ESPN 2

Happy Tuesday everyone! Two games are on tonight, one will be on LiveAccess, while the other is on ESPN 2 or ESPN 3.

Share All sharing options for: Open Thread: Two games for Tuesday, starting at 7:00 PM ET including one on ESPN 2

So, what's on the docket for today?

The Random SB Nation song of the day: Going back to the 90's with The Spin Doctors and "Two Princes."

The Storm has gone 1-1 on its East Coast trip by pulling off the upset against Chicago and nearly doing the same against DC. Tina Thompson, Tanisha Wright, Shekinna Stricklen, and company would like to avenge on their previous loss at home to New York this season. The Liberty will likely come out swinging, considering that Sunday's game was anything but good for them.

This game is the ESPN 2 one. And on paper, this is definitely a game to watch because they're the best teams in the East and West as of today. Many people are skeptical that the Dream is for real, but the inevitable West Coast trip has begun for them as they face off four teams which include Seattle, LA, and Tulsa. This should be an exciting game to watch for sure.

On the injury front, Lynx guard Seimone Augustus is "doubtful" for tonight's game, per the team's official preview. Also from a press release, Dream guard Tiffany Hayes had successful surgery to repair her torn meniscus and will miss three to four weeks.

We may like a particular Ohio State basketball player, but it looks the Gods have responded:

One of our recent threads toward the end of last month showed Tayler Hill and didn't make Michigan fans happy when this is what Nate saw: 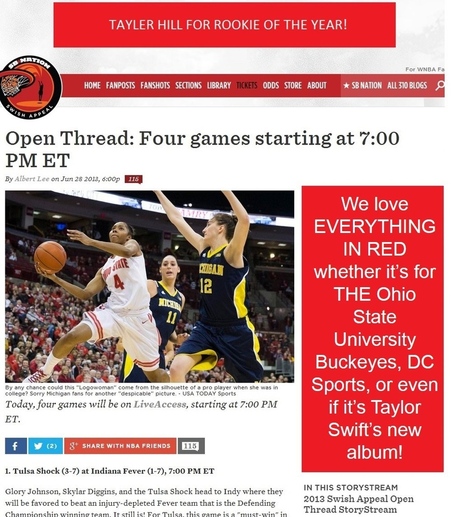 Then today, we saw a new background on our SB Nation sites and a strategically placed advertisement because EA Sports' NCAA Football 14 was released today and I bought it for the Xbox: 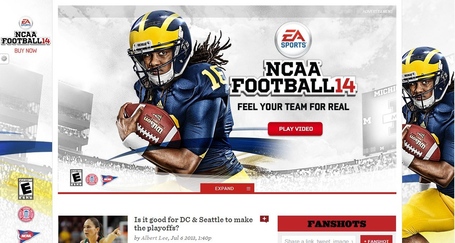 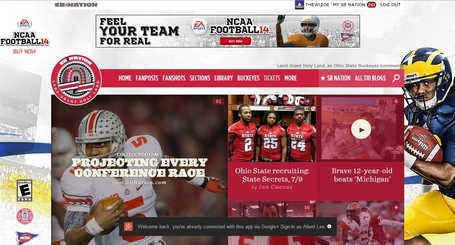 That's gotta be tough. And yeah, I'm still officially thewiz06 if you saw the top of the last screenshot. Big victory for Michigan fans today, including for the boss.

That's all I have on my plate. I probably won't say much today because I'll be at Verizon Center to see the Wizards' SummerFest which will include a scrimmage of the players on their Summer League team which include first round draft pick Otto Porter, who some of you have accused me of Our Boys Syndrome for. I stand by what I said on June 27.