Happy Sunday! Two games are on today, both on LiveAccess unless I say otherwise.

Some Twitter Reactions to Mike Thibault being the winningest coach of all time!

Yup, there were reactions from folks around the league and they aren't exhaustive:

As you might expect, the team gave its official congratulations!

Alan Horton, the radio play by play announcer for the Minnesota Timberwolves and Lynx:

LaChina Robinson also was excited in a retweet:

Congratulations to a GREAT Coach & a better man, @WashMystics HC Mike Thibault! All Time winningest Coach in the @WNBA 👌😄🎉 #212 #Bravo !!

And Lindsay Whalen, who is a Mike Thibault protege:

Congratulations to Coach T on winning the most games in @WNBA history!

There was more big news last night than Mike Thibault being the winningest WNBA head coach of all time.

The Not So Random SB Nation Song of the Day: It's "Red" and I forgot who sang it. Because all the pro teams in Verizon Center wear red and the Mystics won yesterday!

So the big news around the league is that Mike Thibault is the winningest coach of all time. But the Sparks also won their 18th straight home game which is also just huge. The San Antonio Silver Stars, or the team on the receiving end of the loss also saw their star guard Becky Hammon suffer a knee injury in her first game back from a broken finger. In addition, we have this tweet from Andrea Duke of Pounding the Rock, our San Antonio Spurs SB Nation blog on her status, where we still don't know what the extent of her injury is:

UPDATE on Hammon: She will return home to SA for evaluation & then news will be released. @SwishAppeal @poundingtherock

In addition, the Fever is now on a three game winning streak and beat the Sun yesterday, which makes Coach Thibault feel vindicated, and there are some who wondered yesterday whether it's time to terminate Anne Donovan's employment, maybe now, or maybe at the end of the year. I still believe that she should get another full offseason to do what she can, but it wouldn't surprise me if she feels like Trudi Lacey did when she first took over the Mystics.

That said, it does appear clear that the Connecticut Sun's players do miss Coach T a bit too obviously, and you wonder whether that is negatively affecting the players. We'll talk more about Mike Thibault after going through the quick roundup of games.

This game is on MSG+ in the New York area, and WCIU in the Chicagoland area.

In the East, the 2nd through 6th seeds are just four games apart and everyone is still in the mix. In particular, the Libs were bumped to 4th in the East yesterday with the Mystics' win over the Storm, and a win here will put pressure back on DC. The Sky obviously would like to build a cushion around their 2nd place spot in the East.

The West's top two teams in the standings play each other and it should easily be the game of the day given the star power involved as Diana Taurasi and Brittney Griner face off against Mike Thibault's best ever point guard, Seimone Augustus, and Maya Moore.

A Hypothetical Question on Mike Thibault.

Read More: DC beats Seattle and Mike Thibault is the winningest WNBA coach of all time AND DC SURPASSES THE 2012 WINS MARK! (Yeah, I'm still caught up in the moment!) 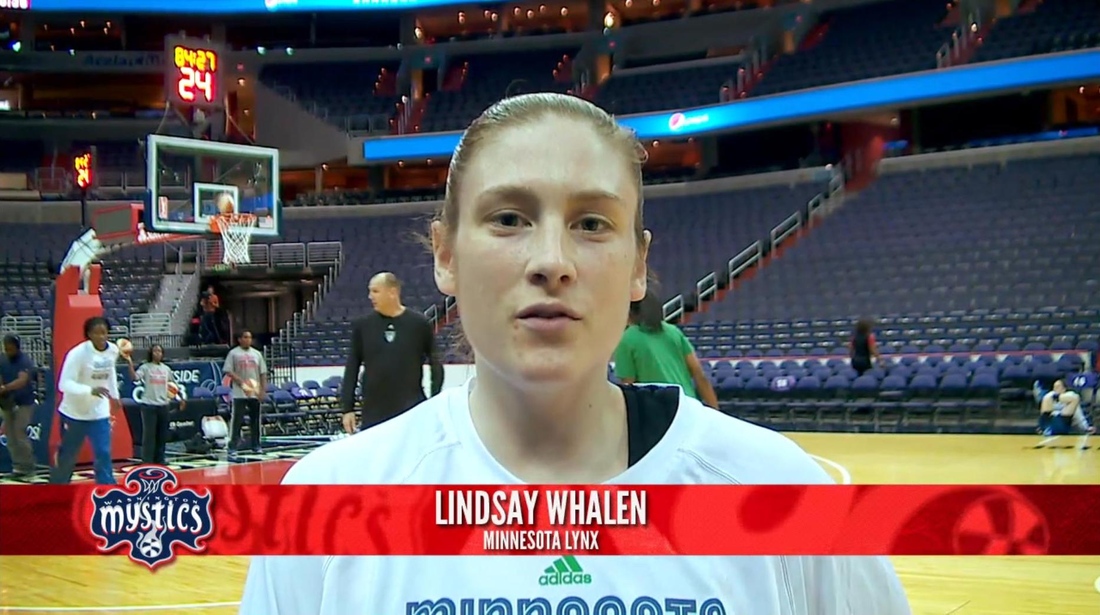 Former Connecticut Sun guard Lindsay Whalen gives a shoutout to her first head coach as a pro. While she's considered by many to be the best point guard in the WNBA, she was not a super-hyped draft pick herself, as she was the 4th pick in the 2004 Draft, and you can easily say that she has had a better career than Alana Beard and Nicole Powell who were selected ahead of her. More inspiration for the Mystics' rookies, not just Tayler Hill who also happens to be from Minnesota like Whalen.

I've made a note that Mike Thibault never really had too much super-hyped and "anointed" talent to work with in regards to his Connecticut Sun teams, at least when it came to getting major star draft picks, until Tina Charles came around in 2010. Two of Coach T's biggest successes as players were Lindsay Whalen and Katie Douglas who both became the WNBA's top backcourt for much of the mid 2000's before they got traded to their hometown or regional teams where they are now. Neither Whalen or Douglas were Top three picks in their drafts, and both started playing for him either as rookies (Whalen) or as younger prospects (Douglas) and both ultimately became All-WNBA First Team players at some point in their careers while playing for the Connecticut Sun.

Anyway, I believe that Coach Thibault, even before coming to DC, is the best coach in the WNBA because he was able to get the most out of his players when it came to showing up every night. Sure, you can point to the fact that he never won a WNBA Finals and in fact hasn't bee in a Finals since the 2005 season. But again, he never really had a superstar-level talent until Tina Charles came along and now she is the reigning MVP.

So that's it. I look forward to your answers regarding Mike Thibault being a hypothetical head coach of a star-studded WNBA team and whether he would win championship with them. Enjoy the games and the rest of your Fourth of July weekends!