2013 WNBA Most Improved Player candidates: A pair of new All-Stars lead the group

Continuing our weekly look at WNBA award races, this week we start from the beginning of the loop and look at some midseason candidates for the Most Improved Player award including a trio of players who participated in their first WNBA All-Star game this past Saturday.

Share All sharing options for: 2013 WNBA Most Improved Player candidates: A pair of new All-Stars lead the group

Allison Hightower's growth on the court probably isn't really news for Connecticut Sun fans - or astute WNBA fans - but as a young player in the league I felt it was one of the better stories of development from the recent WNBA All-Star game.

Ned Griffen of The Day recently described how the work ethic that the fourth-year guard has displayed since her days at LSU is paying off in the WNBA. She was beset with illness in her first year, continued to struggle just to get minutes her second year, and was asked to master the point guard position last season. And although the article refers to her struggles shooting threes in college, that was actually both among her biggest strengths as a prospect and testament to her work ethic: she only shot a modest 34.50% for her career - including a really poor 18.6% in her junior year - but shot a strong career-high 39.8% in her senior year.

Looking back at her LSU profile, the lofty praise from former coach Bob Starkey stands out as increasingly more reasonable as we look at the trajectory of her pro career in addition to capturing the character of that developmental arc.

"I'm not sure this is the proper wording, but in a long way, she saved our program. She was the constant during a difficult time. She is, in my mind, one of the five most influential people to ever play here. She's the hardest working player I've ever coached - men or women."

We can quibble about whether she'd be an All-Star caliber player in any other year - in an injury-ravaged WNBA season, the Sun's backcourt has been hit as hard if not harder than anyone's giving her a unique opportunity to establish herself as an All-Star - but the bottom line is that she has worked for everything she has attained in her career.

From a draft analysis perspective, assessing "work ethic" is nearly impossible - plenty of hard workers have struggled to make it in the pros while others have relied on the talent they entered the league with - and the evidence as to whether statistical improvement in college is a positive indicator is sort of scant. But if nothing else, Hightower makes the case for patience with pro basketball prospects, NBA or WNBA, which is something that is sometimes not even afforded to lottery picks. Hightower was unquestionably a better prospect than nearly half of the wings selected ahead of her in the 2010 WNBA Draft; this season was more about her maximizing the potential that her demonstrated ability and work ethic afforded her, realizing the most optimistic projections that we might have for a second round pick as an All-Star.

There's little question that Hightower's WNBA All-Star selection alone will garner her a few votes in the league's Most Improved Player award voting at the end of the season, but how does she compare to the other players who have made improvements and especially all those newcomers who made appearances in the game?

How do we define "improvement"? 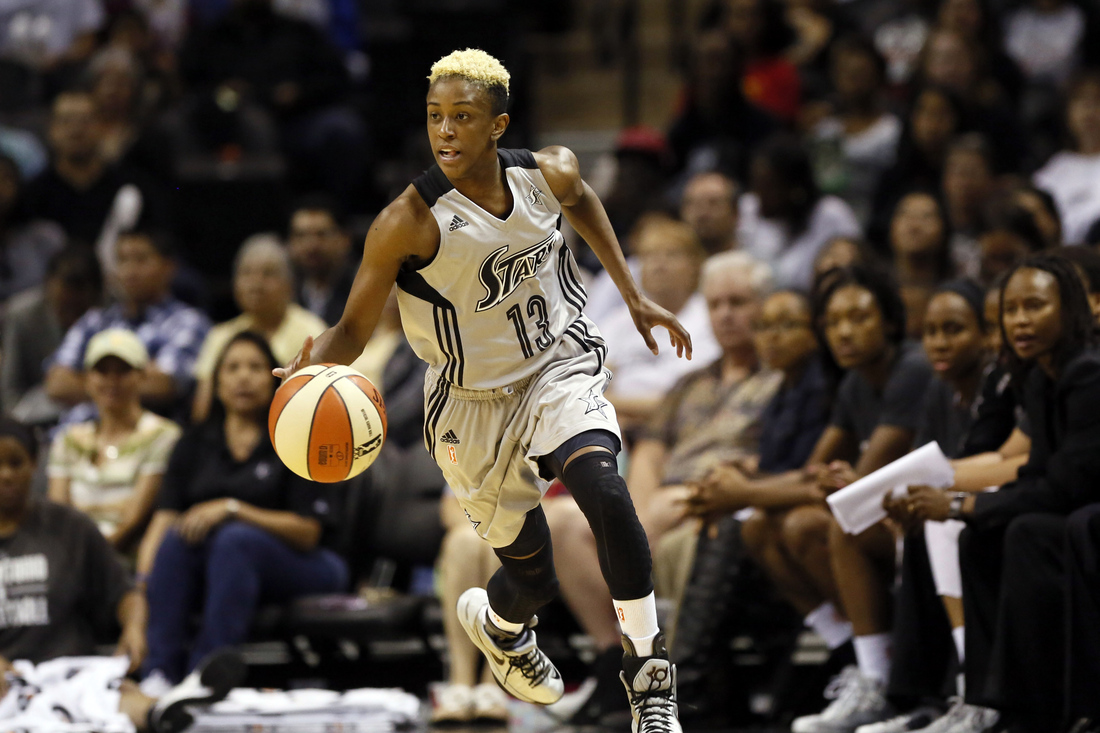 The WNBA's Most Improved Player award has actually been quite predictable over the years and although there weren't many "traditional" candidates for the award entering this season, 2013 WNBA All-Stars Allison Hightower and Danielle Robinson were among those poised to make a leap.

As described in the past, the best way to define "improvement" is by looking at whether a player did more with the minutes they received - did they actually demonstrate improvement in terms of contributing more in the minutes they got or did they just contribute at exactly the same rate in more minutes?

A helpful metric to figure that out over the past few years has been Valuable Contributions Ratio (VCR), which was previously described at (really long) length in relation to World of Warcraft (don't ask how I went down that road). In short, it is a metric that compares a player's contributions to the team's overall production to the ratio of minutes they were on the floor. While people often focus on increases in traditional production stats - per game averages - for the purposes of the MIP award, an improved VCR might be the most significant determinant: it's a real indicator of whether as player actually improved their play or was just on the floor more often.

Looking at how much a player has improved their VCR has been a pretty good way of figuring narrowing down the strongest candidates even at mid-season - it's not always the player with the largest change in VCR who will win the award, but it helps to narrow the field once you account for relevant caveats. And as described earlier this season, the MIP award is actually quite predictable when you look back at its history (which might be a different question than who's actually most deserving in a given year).

But of course, the fun part of the MIP award is that it's unpredictable: while I'd argue that three of the top candidates for this year's award were predictable prior to the season - including Hightower - three players made more "unexpected leaps", either because they were already pretty good or circumstances gave them the opportunity to shine.

Numbers for the top MIP candidates

Below are 14 players who made the largest leaps in VCR between the 2012 and 2013 WNBA season. The 15th player is someone who has made major strides from marginal backup to All-Star over the past 2.5 seasons who will probably be in the discussion in the minds of many.

Before sorting out who the top candidates are, it might help to take a closer look at the numbers to put them in context.

So with all the caveats to the numbers the list becomes much clearer. Sort of - Williams probably deserves a second look.

Honorable mention: Tamika Catchings, Indiana Fever: Ok, just kidding. Sort of. Can we just take a moment to say how awesome Catchings is? Every year there's a star player who continues to improve (interestingly, it's usually a Chicago Sky player) but to see Catchings continue to get better in any way is remarkable. We could go into how exactly she's gotten better, but let's just move on to players who might actually win this thing.

6. Riquna Williams, Tulsa Shock: Setting aside the matter of being a second year player, Williams also has the largest improvement of these top 14 in true shooting percentage at 7.29%. She's also doing less of other things like creating shots for others and rebounding, but going from a 45.75% true shooting percentage (below average for a scoring wing) to 53.04% (above average) is impressive and valuable for a volume shooter nonetheless.

5. Danielle Robinson, San Antonio Silver Stars: Based on watching her play, I was surprised Robinson's VCR hadn't increased more than it has but the problem is pretty obvious: Robinson has had the biggest decline in scoring efficiency (by far) among the players in the top 14 (-8.65%). Part of that is undoubtedly related to being forced to do more scoring for the Silver Stars, but when compared to some of the other players it makes it difficult to say she's the most improved player out there.

4. Kelsey Griffin, Connecticut Sun: Griffin was another player who was a predictable candidate entering this season because she was going to start and get the minutes to prove herself and, indeed, she's made some of the biggest strides in the league statistically. The only reason I wouldn't rank her higher on this list is that she's still a role player in terms of the offensive load she's taken on and her biggest improvement is about what she hasn't done: turn the ball over (a -7.86% decline in turnover ratio). As impressive as it is that she's made such significant improvements, a few other players could make a case that they've done more for their respective teams.

3. Camille Little, Seattle Storm: Although I try to avoid talking about the situation with these things, it's almost unavoidable with Little: with Seattle's two star players out for the season due to injury, it was obvious that others would have to step up. Prior to the season, Tanisha Wright was the player who I thought had the best shot to put everything together into a MIP package and she has in fact improved quite a bit (+18 VCR) though not as much as some of these other players. But Camille Little has quietly emerged as the team's star this season.

More: Should Camille Little have been an All-Star? Has Storm coach Brian Agler done the best job in the West? Eastern Conference evaluations at midseason

Not only has Little become the Storm's leading scorer (12.4 points per game) but has also done so while scoring more efficiently than she has at any point in her career (60.96% true shooting percentage). The jump in efficiency is explained almost entirely by her career-best 3-point shooting (in seasons with at least one attempt per game): Little is shooting 39.3% from beyond the arc this season. And all of that is before we get to any discussion of her versatility on defense.

If the Storm make the playoffs, Little's improvement will be a primary reason why and that should keep her in the MIP discussion.

So after gushing over Little it might seem weird to put two players above her, but Hightower and Zellous have done something Little hasn't this season: they've gone from well below average contributors (the .80-.84 VCR range) to well above average whereas Little has gone from above average to elite. That improvement in which players make big jumps up the league's hierarchy always stands out as most impressive.

I put them together because the character of their improvement is somewhat similar: they've both gone from role player minutes to starter's minutes and both have seen an improvement in their scoring efficiency. Hightower's ability to remain an efficient ball handler as she continues to adjust to the point guard spot is impressive, but Zellous' leap from a below average efficiency scorer to about average is equally noteworthy while adjusting to a career-high minutes is equally impressive.

But really stands out about Zellous in addition to being a more efficient scorer with more offensive responsibility is that she has become the Fever's leading scorer (career-high 15.5 points per game). And that's especially significant when you compare the situations of the two teams: if the Fever continue to surge and make the playoffs (they're currently fourth), Zellous' role as leading scorer will be no small part of that. That's not to diminish what Hightower has achieved, but Zellous probably has the edge right now.

The interesting thing about VCR is that it's extremely volatile: because it's minutes-based and we've only been through half of a 34-game season, the order of things could change quickly (honestly, it did last year when Kristi Toliver won). But over the least few seasons, the top players at midseason had remained the top players for the season.

Who should be the 2013 WNBA Most Valuable Player? Vote in the poll below, drop your insights or missing candidates in the comments below, or write a fan post if you have a longer commentary that you'd like to share with the community.