Candace Parker set a new record for points in a WNBA All-Star Game to lead the West to an entertaining 102-98 victory over the East.

Congratulations to @Candace_Parker for setting a new WNBA All-Star game record with 23 points, completing the double-double with 11 boards.

Parker set a new WNBA All-Star game record with 23 points to lead the West to a 102-98 victory over the East, showcasing a bit of everything she can do on the basketball floor when she decides that her team is going to win a game.

These games aren't about analysis or what it takes to win championships but it was also sort of hard to avoid that today's game was the quintessential example of why so many people here wish that Parker's shot charts for the season looked more like this: 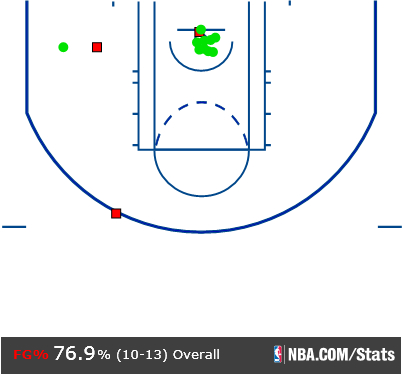 Now obviously this was an All-Star game, which means defense was optional - reality is that Parker probably wouldn't even get shots so easily against an opponent playing anything remotely resembling help defense. Still, that's exactly the type of dominance people envision, or hope for, when harping on Parker's shot selection during the regular season: a player who stands out as undeniably the best of the best in the WNBA.

For the Eastern Conference, Ivory Latta was the center of attention not only for her play on the court but also for her standard exuberance off of it.

With the All-Star game now complete, the WNBA will resume regular season competition on Wednesday on NBA TV when the New York Liberty head south to face the Washington Mystics at 7 p.m. EDT. With a few teams just starting to find their rhythm, the second half of the season promises to get more entertaining.

For more on the game and the roster selections, check out our 2013 WNBA All-Star Game section. To keep up with all the reactions around the web, check out the new WNBA stream in the Beyond the Box iPad app.