Share All sharing options for: The Beyond the Box iPad app brings a new second screen experience to the WNBA

We told you about a month ago that the Beyond the Box (BtB) iPad app was going to be released for the WNBA this summer and it was made available in the app store earlier this week.

From the press release about the update:

Beyond the Box allows WNBA fans who don't have time to curate and maintain their own list of media, player, and team sources to instantly access the highest quality live commentary in one place.

The Beyond the Box second screen experience enables WNBA fans to:

Additionally during the offseason, WNBA fans can keep track of their favorite WNBA players while they're playing overseas.

Part of what makes BtB useful is its simplicity, both in terms of usability and the lack of noise that active Twitter users might see in their timeline.

The app divides up the various voices in the Twittersphere up by teams in addition to a "General WNBA" group (where you can find tweets from Swish Appeal). When you select a stream, it will look something like this: 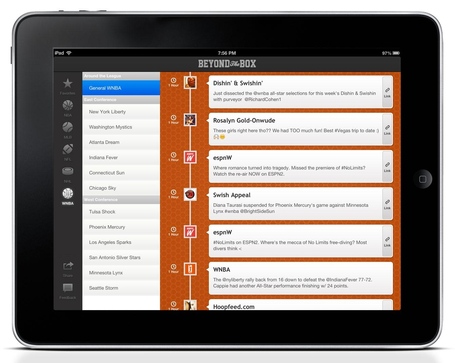 A screen shot of the General WNBA stream.

I've been using BtB for the NBA and found it especially helpful for perusing what local journalists are saying about free agency or various teams' offseasons around the league. For the WNBA, the voices of the players are far more prominent, which will probably make for an interesting experience during events like the All-Star game or during the offseason.

You can download the new version of the app from for iPad and iPad mini by following the link below to the App Store:

For more information on the app generally, check out the Tumblr. To sign up for updates on iPhone and Android launches, click here.