In this week's look at WNBA player statistics, we look at the top point guards around the league to help guide discussions about who deserves an All-Star selection in light of today's announcement about the early returns from fan voting.

Every time I hear someone question whether point guards matter, I immediately recall the 1996 Kentucky Wildcats-LSU Tigers Principle: if you can't advance the ball past half court, it becomes really difficult to play basketball, but we often don't appreciate what a point guard does to facilitate that until they're not there.

That isn't about statistical correlations, abstract theories, or some nostalgic longing for the selfless pure point guard that does nothing but pass and run the offense as a true extension of their coach. It's about what Indiana Fever All-Star and 2012 Finals MVP said after having to fill in at the point guard spot for Briann January this past Sunday, as reported by Larry Hawley of WXIN in Indianapolis.

"it’s easy to play the four, easier than playing the three, and then going to the point guard that’s just like you’re the quarterback of the whole thing-and you get tired fast.

Ultimately, no matter how you label the function of "advancing the ball upcourt to help the team get the highest quality shot possible", good teams have someone who is capable of handling the ball and making good decisions with it. And even if you don't need an All-Star point guard to win championships in the NBA or WNBA, the type of player you stick in that position matters because what Catchings describes is a distinct skill or, as some might suggest, a personality trait that no single statistic can really capture well.

Aside from the Catchings example, there are two other recent examples of how important competent point guard play can be even if you aren't able to find a player who epitomizes pure point guard play like Ticha Penicheiro or John Stockton.

As much as Latta and Taurasi help to demonstrate the value of a point guard to their team this season, they also reiterate the point that the diversity of styles of play that can fill the position effectively. If what you want from a point guard is fundamentally someone who can help your team create shots within a team's system, then whether they have more of a scorer's mentality or more of a pass-first mentality is less relevant than their ability to make that decision efficiently: if the point guard is the team's most efficient scorer, then the best decision is to call their own number.

So how do we measure that decision-making ability or the "infectiousness" that Ogden describes? And with All-Star voting in full swing, how would we determine the top point guards in each conference? Would Taurasi even count as a "point guard"? As usual, we turn to the statistics that created the graph below. 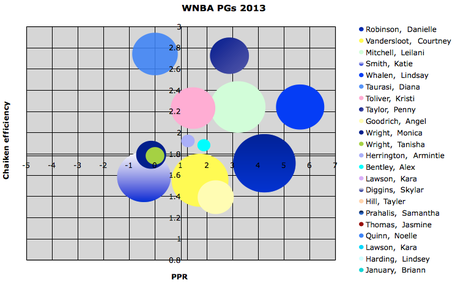 A few notes on the graph above:

Statistics for point guards with a positive plus/minus rating as of 7/1/13. Click here for the full table and explanations.

Ed Bemiss has the additional usage, turnover percentage, and true shooting percentage numbers for every player in the WNBA (click here to see those) that are also useful in figuring out who the top point guards are. 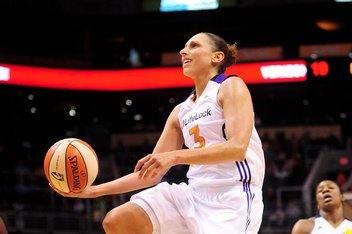 The early returns for the 2013 WNBA All-Star game voting are in and, as expected, Diana Taurasi leads the voting for all guards, East and West.

1. Diana Taurasi, Phoenix Mercury: Regardless of how you usually classify Diana Taurasi, putting the ball in her hands was the best thing that happened to the Mercury this season and, to Catchings' point after Sunday's game, that she's filling the role so efficiently is remarkable.

2. Lindsay Whalen, Minnesota Lynx: These rankings weren't designed to favor Whalen, but as long as she's playing there's no way she's ever going to be lower than second. She currently holds the league's highest pure point rating is the next most efficient scorer by Chaiken efficiency, and might end up as the best point guard on the best team at the end of the season. In addition, her rebounding ability (14.21% defensive rebounding rate) and free throw rate (65.88%) demonstrate what a physically imposing presence she is compared to most of the league's guards.

3. Danielle Robinson, San Antonio Silver Stars: Robinson was on Most Improved Player watch to begin the season and she's backing that up with some impressive point guard numbers this season. She has the second highest pure point rating (among regular contributors) in the league and might be the best defensive point guard in the league due to her quickness. That entire package has helped Robinson achieve the third-highest plus/minus rating in the league, which is hard to read into too much at this point but is worth watching as the season goes on. There's also definitely an argument for her being ranked ahead of Whalen, if you're considering All-Star votes at point guard (and putting Taurasi as your other guard in the Western Conference): Robinson is by far the MVP of her own team, whereas Whalen has talent around her to turn great passes into assists.

4. Lindsey Harding, L.A. Sparks: This is where things get difficult because the next two players have a similar flaw: a negative plus/minus rating despite posting good numbers; it's early so it's hard to penalize either of them for that too much beyond putting them below Robinson though. Perhaps that's not all that surprising given that they're both players with higher scoring tendencies, but Harding gets the edge here for being both an efficient distributor - she creates more assists, which helps her pure point rating - and scorer despite Latta doing so much for her team.

5. Ivory Latta, Washington Mystics: To put her improvement in perspective, when I did this a few years ago Latta's bubble was off in the distance to the bottom left - the perception that she was more of a scoring guard than point guard wasn't exactly baseless. But the key for her this season (and really last season as well, which might hurt her chances at winning Most Improved Player) is that she has just become a much more efficient scorer while also becoming a positive as a distributor. Obviously, you could argue for a reversibility test here: would Washington be as good if you swapped Harding for Latta but those are always difficult arguments to make. However, she's currently third in All-Star voting among guards and it would be a shame if she's not named a starter given the season she's having at the time of the vote.

6. Courtney Vandersloot, Chicago Sky: The key for 'Sloot this season is that she's just been above average this season as a distributor and scorer - no she's not an efficient shooter, but she is looking for her own shot less (with Elena Delle Donne, Sylvia Fowles, and Epiphanny Prince around) and she has cut down on her turnovers considerably. Most surprising right now: she has the fifth-highest plus/minus in the league right now. That's not enough to lift her into the top five right now because all five of those other players are more responsible for scoring on their teams, but it's impressive nonetheless and she gets the nod over other players as a full-time starter.

7. Kara Lawson, Connecticut Sun: Things get really tough here, but Lawson gets the nod as the only remaining starter efficient as a scorer or a distributor. She has been playing visibly hurt, but has still managed a 57.33% true shooting percentage. Her negative plus/minus is a concern, but only two healthy players that have been on the roster every game have maintained a positive plus/minus for them over the course of the season - they just haven't been good this season.

8. Temeka Johnson, Seattle Storm: Johnson isn't having a particularly efficient year as a point guard as she's being relied upon heavily to score without Sue Bird and Lauren Jackson around for the Storm (she has a team-high usage rate of 24.89%). That just has to be taken into account when considering her inefficient numbers. That she still has a Chaiken efficiency near the standard average is actually impressive in that regard.

9. Leilani Mitchell, New York Liberty: Mitchell has the sixth-highest plus/minus rating in the league which makes it really difficult to leave her off this list. The reason she isn't higher is a really low usage rate of 13.85%, which indicates that she's not a major factor on offense.

10. Alex Bentley, Atlanta Dream: Alex Bentley shooting 13-for-28 from the 3-point line might well be the biggest (pleasant) surprise of this entire 2013 rookie class. What gives her an edge over Skylar Diggins - as unfair as it is to compare a starting point guard to a reserve - is exactly that: her ability to knock down shots gives her an above average efficiency. Her defensive instincts fit perfectly into Atlanta's style of play. Long-term - and maybe even by the end of this season - Diggins figures to make her way onto this list and pass Bentley, but for now the numbers don't support that.

Eastern conference: It's not evident from the numbers above per se, but there's quite a gulf in the Eastern Conference between Ivory Latta and every other point guard because she's the only one who's the MVP of her team. If you believe point guards deserve a spot, she has to be a starter. Even if you don't, the fact remains that she has arguably been the best guard in the conference if you take into account that Epiphanny Prince has missed three of 10 games.

Western conference: If you're willing to accept Taurasi as a point guard, she's the choice in the Western Conference starting lineup. If you're not, then it does get tough: Robinson has a really strong argument as the top player on her team this season when taking into account what she does for them as a point guard. Whalen is... Whalen....so I'd go with her.