The New York Liberty's defensive efficiency carried them in their win over the Seattle Storm on Tuesday.

Share All sharing options for: The New York Liberty ended their three-game losing streak with defense

NEWARK, NJ - It wasn't artistic but it was back in the win column.

The New York Liberty defeated Seattle Storm 66-57 at the Prudential center on Tuesday ending a three game skid. Of primary significance was a return to their defensive focus and performance.

In sheer numbers the Liberty allowed the Storm just 57 points, a vast improvement of their three game skid that saw New York in a too generous mood, allowing over 90 points per outing. The efficiency comparison from Sunday to Tuesday's win is significant.

Giving up an efficiency of 116 virtually assures an effort heading into the loss column. On the other hand, a 76 almost guarantees a win. If not (due to a subpar offense) at least you will have a chance.

The Liberty's loss to the Sky 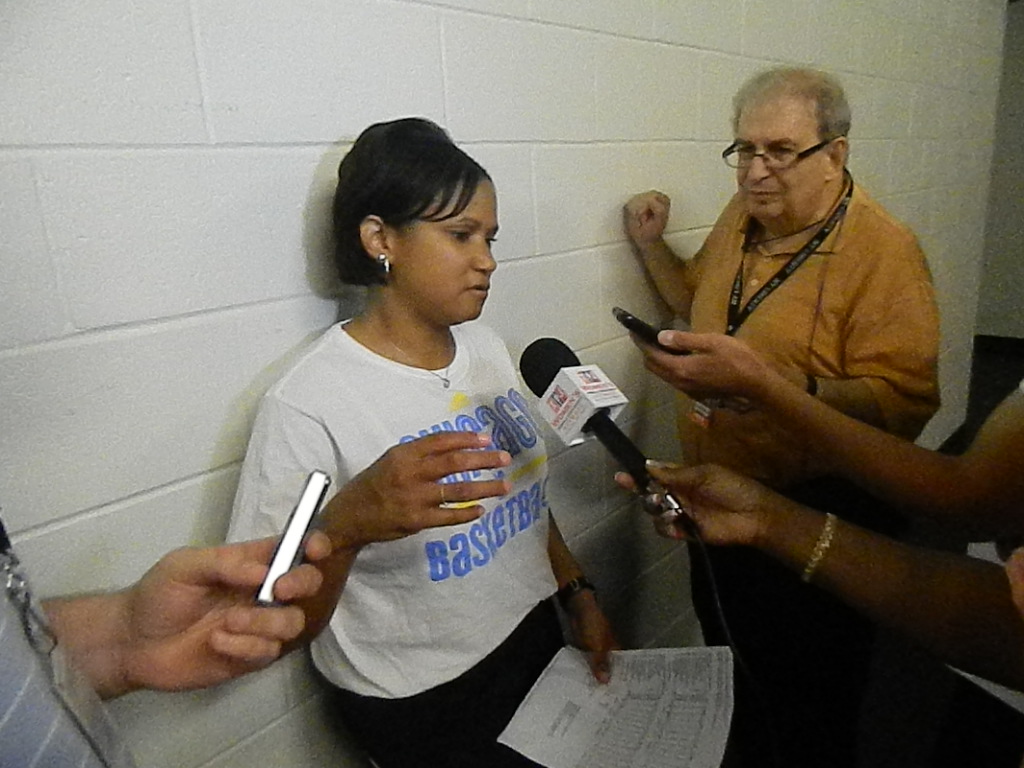 Pokey Chatman was concerned heading into The Rock on Sunday, but her Chicago Sky came out strong in the second half to get the win.
On Sunday the Chicago Sky defeated the Liberty 93-64. New York bounced back two nights later with a 66-57 victory over Seattle. In points, that is an improvement on 36 points on defense. The efficiency or points per possession can give us a better look.

For instance, Sunday was a game in the low to mid eighties possession pace. Obviously the Liberty trailed and wanted more possessions to hope to make a comeback. Tuesday saw them lead almost throughout thus dictating a tempo in the mid seventies. The table above shows in the efficiency column just how good the Liberty's latter performance was.

Numerically speaking if Sunday saw a 90 possession game the Liberty would have allowed a 103 efficiency. Above average but not a cause for alarm because the game had almost 100 possessions. The 166 allowed in the low to mid eighty possessions affair was a cause for alarm. And, as Tuesday showed, the message sent by coach Laimbeer was well received.

On Sunday the Liberty were beaten in three of the four categories. They had a surprising 31-28% edge in offensive rebounding percentage and reduced the turnover rate to 18%. The glaring difference was the Sky's 46-17% advantage in free throw percentage. That number tells us Chicago was getting the ball in too close and offensively putting themselves in a position to get to the line.

Tuesday's defensive effort saw the Storm limited to 40% eFG percentage while getting only a 16% free throw rate. A good example of the defensive effort by Bill Laimbeer's club. Forcing the opposition into sub-par shots which were contested and not from areas that would allow the offense to draw a foul.

Using the NBA/WNBA model we take a look at the efficiencies of the two games. Best performance by Elena Delle Donne of Chicago. The sterling rookie posted a 23 on 20 points, 6 boards and a very efficient 7 of 12 shooting. Two of those conversions she was fouled on and converted.

Chicago's Epiphanny Prince posted a solid 16 efficiency. Prince scored 18 points on 6 of 12 shooting from the floor.

Virtually unnoticed for the Sky was Sylvia Fowles. She turned in a 15 efficiency in 20 minutes on the merits of a 10 point, 6 rebound effort.

Cappie Pondexter was the only Liberty player to hit double figures in efficiency on Sunday. Pondexter's efficiency was 17 as she led New York with 18 points while grabbing five rebounds and handing out four assists.

Tuesday saw no player crack 20 in the efficiency column. For Seattle, Tina Thompson 13 and Tanisha Wright with 11 were the team leaders and only players to crack double efficiency digits for the storm.