The Phoenix Mercury got their first win of the season today after a cold third quarter derailed the chances for the Indiana Fever to get a win at home while playing short-handed.

The 82-67 final score does nothing to describe how ugly the Phoenix Mercury's nationally televised first win over the Indiana Fever was today.

Putting aside the pair of technicals that the Mercury picked up in the first half and the officials allowing physical play, it just wasn't a showcase for how beautiful a game basketball can be.

In the first half, both teams shot about 40% while committing a combined 28 turnovers. Yet the Fever's hot 3-point (4-for-6) and solid free throw (8-for-11) shooting helped them take a one point lead into halftime.

Then things got really ugly for the Fever in the third quarter: the Fever missed their first eight field goal attempts in the second half before getting a 3-point basket with 6:02 left from Tamika Catchings, who finished with a game-high five steals and team-high 10 rebounds to go with her 14 points. But that reliance on jumpers was part of what really stood out. 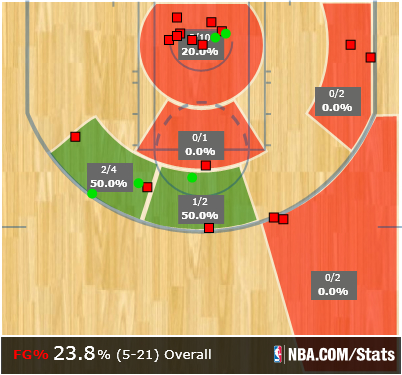 The Indiana Fever's third quarter shot chart against the Phoenix Mercury.
(Note: The 3-point line shown above is the NBA line. The Fever went 1-for-4 from 3-point range in the third.)

Yes, they had 10 attempts at the rim but three of those came on one tough possession from Karima Christmas, meaning they were otherwise 2-for-7 from inside five feet and only got one trip to the free throw line (1-for-2). The rest was a lot of jumpers. And although they got six offensive rebounds (again, three from Christmas), two were kicked out for jumpers.

In other words, the Fever took a lot of perimeter shots and just couldn't hit anything.

The Mercury did bring the intensity in the second half, but a number of the Fever's perimeter shots were open shots - not necessarily regrettable - and then they missed a number of layups. Perhaps even more importantly, the Mercury stopped turning the ball over (2 turnovers, one of which was a dead ball turnover) which cut off opportunities for the Fever to score in transition.

Meanwhile, the Mercury shot 8-for-16 in the third.

Obviously, there's plenty to be said about the Mercury winning without Brittney Griner on the floor while the Fever were without an entire rotation's worth of players (click here for more on what this performance means for the Mercury from our open thread). But once the Mercury's offense finally found its rhythm - including Diana Taurasi, who scored a team-high 26 points) there wasn't a whole lot that the Fever could do to re-gain the momentum after a frigid shooting performance in the third quarter.

For those who need Dee's interview translated>> I don't give a *beep* it's on me! Drops mic... Lol Dee is to funny yet very serious! #wnba