For DC (5-6), four of the five starters (Ivory Latta, Matee Ajavon, Crystal Langhorne, Monique Currie) scored at least ten points and Michelle Snow also scored 9 points. For the Shock (3-10), Roneeka Hodges scored 16 points off the bench and made five threes, on an otherwise abysmal performance by the team overall.

The bench players from both teams with the exception of Hodges didn't shoot the ball efficiently, though I will say that Tayler Hill played some stingy defense and had two steals. She did get seven points, five of them from free throws so she is showing more assertiveness by driving to the hoop, like some of the cover photos we had of her when she was in college.

The most striking thing I saw on the stat sheet is this. First, the Mystics outrebounded them badly, 48-29. Second, the field goal percentage for the Mystics was fine at 43.3% (29-67 shooting), but for Tulsa, I'm just going to tell it how it is. It was pathetic. 17-70 shooting or 24.3% overall from the field. That sucks by any metric, and the Shock put out a pitiful performance today. No way around it and I can't sugar coat it even though I've given this team a lot of praise. The Shock somehow made 8-31 threes (25.8%) which is better than the total field goal percentage but that's with Hodges' numbers. To put things in perspective, once you take out Hodge's stats, the Shock made 12-60 or 20% of its shots. Sure, the Mystics played good defense, but there's no way that even the best teams in the pros can hold a team to under 25% shooting consistently.

There were a number of Shock fans in attendance today, and especially Skylar Diggins fans out there and yes I'm record as a fan of hers too since she's my favorite of the Big Three. But Diggins herself also gave a subpar performance only scoring two points on 1-5 shooting, with three assists and three turnovers. There were times where she was just visibly frustrated on the bench and in fact fellow rookie Angel Goodrich played more than she did, but she wasn't any better. Liz Cambage was also visibly frustrated during the game and got a technical late in the game.

After the game, I decided to stay and listen to the Q&A with Tayler Hill and Skylar Diggins. There was actually a decent crowd that remained for it. Christy Winters-Scott, the team color analyst moderated it and there were no questions from audience members. Before the Q&A, Hill came out and was in street clothes and it was several minutes, felt like 10 minutes or so before Diggins came out and she was still in her uniform, albeit in sport sandals and she was visibly glum. Here's a pic, though it may be grainy since an iPhone can only be so good. 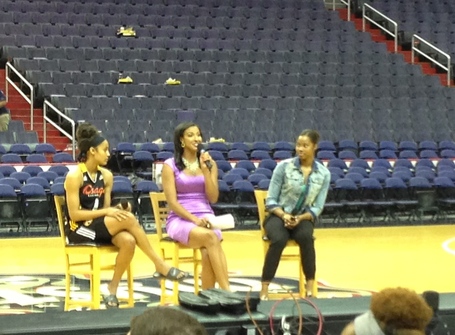 But to be fair to Diggins, If I'm her, didn't have my best game, and my team gets blown out by over 20, and quite frankly, it could have been worse, it would really suck to have to do this RIGHT AFTER THE GAME, AND ON THE OTHER TEAM'S COURT. None of the questions were those that would make the players feel uncomfortable or defensive, and I expected that, but I did hear two things that I didn't really know before. One. Hill and Diggins met each other while they were in high school playing AAU basketball. Second, Diggins answered a question regarding whether she would play overseas this offseason and she said that she was undecided on that.

Going back to the Mystics, they will have an opportunity to go 2-1 on this three game home stand this Saturday when they play the Seattle Storm at home, where Tayler Hill will once again face off against DC area native Tianna Hawkins, who was long considered to be a near lock as the Mystics' first round draft pick, so it will be interesting to see what kind of a reception she gets on Saturday.