Happy end of June everyone! Three games are on tap for today as we finish out the first half of 2013 all on LiveAccess unless I say otherwise.

Turn on SPSO if you're in the Atlanta area.

The Dream is 6-0 at home right now and is firing on all cylinders. Danielle Robinson and the San Antonio Silver Stars better bring their A-game if they want to have any realistic chance of winning this game.

The Random SB Nation song of the day: This thread came out at 11:30 AM Eastern Time, just so this song would be perfectly appropriate for my time zone, even if it's just for 30 minutes. Maroon 5's "Sunday Morning" will be played.

This game is on NBA TV nationally. If you're in the DC area, the game will blacked out on NBA TV, and you must watch the game online at Monumental Network.

Zack already has his preview out. Just some other things to add.

Mike Thibault and the Washington Mystics look to get the sweep against the team they beat in their season opener on National TV. If they win tonight, Thibault matches the career wins mark set by Van Chancellor, and the Mystics will also match last year's regular season win total.

The Shock has other plans. In their four game road trip, they went 0-2, including a loss to the otherwise woeful Indiana Fever on Friday which was the "must win" assuming they want any realistic hope of the playoffs. This game now turns into that must win game, and considering that there's more talent on the Shock than the Mystics, they do have the upper hand to win this game. Of course, I'd like to see a win assuming I see other things take place which most of our regulars know at this point.

After the game, there is a meet and greet with Tayler Hill, Swish Appeal's co-fan favorite player in this rookie class alongside Fever guard Layshia Clarendon. Also, the player who was picked above her will be in the meet and greet. I know this from my Washington Wizards and Mystics Season Ticket Holder weekly emails.

Wizards season ticket holders are called DC 12 Club members, because there are 12 months in a year, and there are events every month for us to attend. The Capitals call their season ticket holders Club Red 365 members since there are 365 days each year, except in leap years of course. Both teams have regular events all year long including during the offseason which is right now. So you know that I did get a solicitation for today's game as a "DC 12 Club" member, here's a snapshot below of the ticket offer: 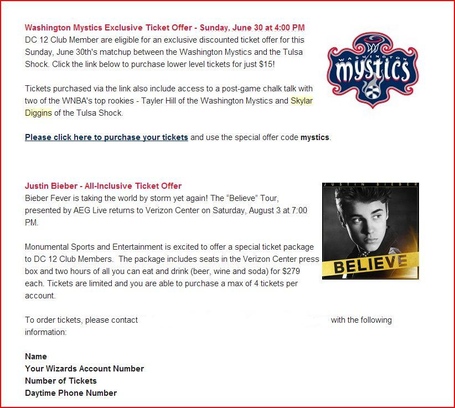 ...and here is an example of an offseason event for the Wizards which I made a snapshot of as well. There will be one next Tuesday which should be pretty nice.: 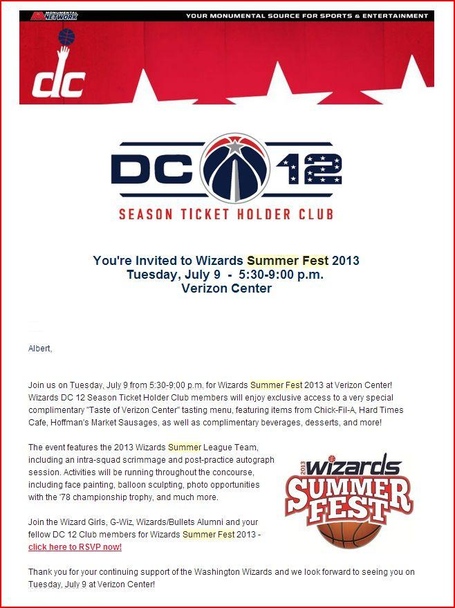 The Mystics sold a special draft package so outside fans can watch Tayler Hill square off against the Big Three and their teams, but buyers of that package had to buy all four games (two Chicago Sky, last Thursday's game vs. Phoenix, and today's game vs. Tulsa) involving the "anointed ones." Mystics season ticket holders (there's no "club name" for them yet), also had an offer to buy additional tickets for last Thursday's and today's games. I assume that this will go out again for the Sky games. Snapshot is below: 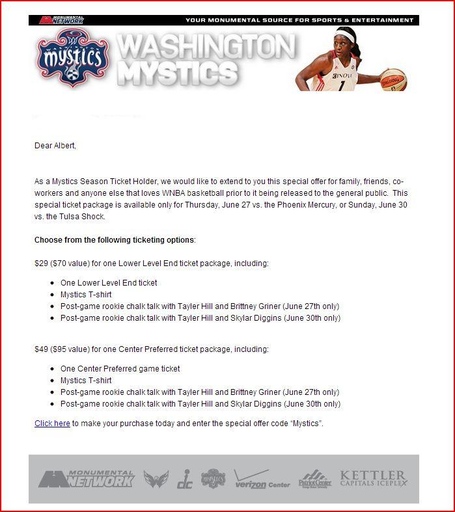 The Storm lost at home to the Liberty in their last game before this four game East Coast road trip. They now get a chance to play the injury-depleted Fever, but with Tamika Catchings back, Indy beat the Shock last Friday as said before, and this game is by no means a gimme for the equally injury depleted Storm.

So that's all I have for today. Enjoy the games everyone, and let me think long and hard about getting tickets for the Biebs....