Monday morning links: Seattle shows character against the Mercury, Skylar Diggins off to a rough start, Minnesota no longer an 'afterthought'

It's WNBA season, which means we're going to get back to doing links more regularly on days after games are played. As explained last season, this is not an exhaustive list but a quick review of the action from the weekend highlighting those articles that reflected some of the observations I made when looking at the stats.

Share All sharing options for: Monday morning links: Seattle shows character against the Mercury, Skylar Diggins off to a rough start, Minnesota no longer an 'afterthought'

Among the most highly-touted rookie classes in league history was understandably the story of opening weekend in the WNBA.

After watching this past weekend's games, an old Public Enema Enemy song came to mind.

Anyway, on to the links, starting with the good news from opening weekend and then breaking down the hype as necessary. 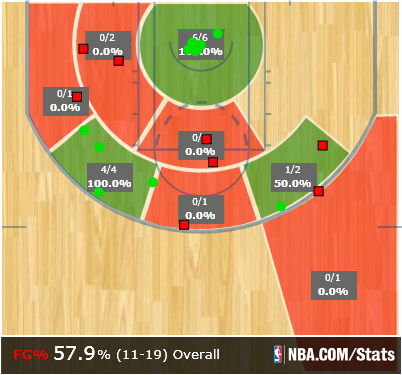 Maya Moore's shot chart against the Connecticut Sun on Saturday.

As another reminder, there are obviously other links out there that I missed so feel free to dump them in the comments below along with all of your other colorful insights. But if you feel a really long comment coming on, may I suggest a fan post where we can promote your thoughts to the front page after others "rec" it (note how I'm assuming your brilliance) and it will be easier to find later. If you find links that you think we'd all benefit from between now and Wednesday, feel free to create a fan shot and I'll add it to our next links post (Thursday morning) as I did with TruthClarity's.

In any event, Happy Monday.