The Washington Mystics (4-4) will try to stop a three game losing streak as they host a Phoenix Mercury team that is now at 5-4 and looks to sweep DC out of the building. The 2013 NBA Draft is also the big focus tonight in the basketball world, and that's on at 7:30 PM ET. The game is online through LiveAccess nationally , but in the DC area, it's online through Monumental Network.

Share All sharing options for: Open Thread: The Washington Mystics host the Phoenix Mercury at 7:00 PM ET and the 2013 NBA Draft is on at 7:30 PM ET on ESPN

I have nothing much to say on the Mystics-Mercury game tonight, but given that this is the first game where a Big Three pick will be coming to town, there should be a bigger than average crowd. Perhaps some celebrities, including Washington Redskins franchise star Robert Griffin III may even show up. But if he's here tonight, RGIII won't be here to support the Mystics, and that could make some Mystics fans who support the Redskins turn to Cowboys fans in a jiffy (is this blasphemy?).

Given how Tayler Hill was a no-show at least with her shot last time DC played Phoenix, you'd think that she shows up today. I don't care if the Mystics win or lose given how I'm evaluating this season, but I do expect Hill to perform at a high level.

More on Meet and Greets with other team's players:

I've already given my vehement displeasure with the Atlanta Dream doing such an event with the Tulsa Shock franchise player. The Mystics are selling a "Draft Package" so you can see Tayler Hill (GO TAYLER!) face off against the teams that have "The Other Three." Basically anyone who buys this package will see Tayler Hill and the Washington Mystics in four games which include both Chicago Sky home games, the Mercury game tonight, and the Shock game on Sunday which have the Big Three picks: 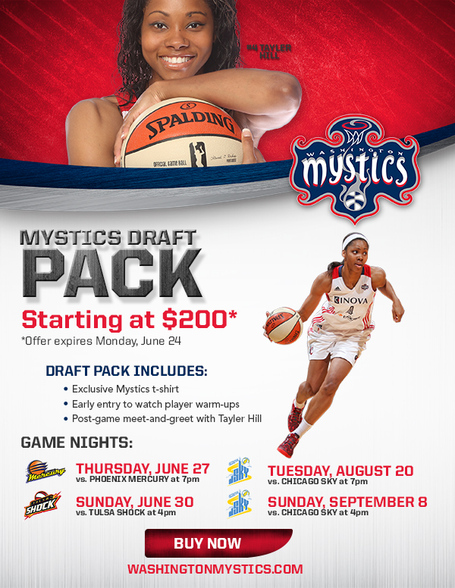 The good news is that they're selling Tayler Hill! Like The Rock says in WWE matches, "FINALLY! FINALLY!!!!! The Mystics are ACTUALLY MARKETING THE FUTURE OF THE TEAM!" Sure, she's only the "lousy" fourth pick, but Nate has hyped her and convinced me that she can be a Big Three player when it's all said and done. And, SHE IS THE FUTURE OF THIS TEAM! She's having a meet and greet after the game! Another WIN!

Vote for the All Stars by clicking here.

Unlike the 2013 WNBA Draft where there was a clear big three, this NBA Draft is considered to be a "weak draft" with no stars. Nevertheless, there are some who have emerged from the pack and are likely to be selected in the Top 10 or so. Here are some of the players who have been frequently mentioned as possible Top 5 picks:

The Cleveland Cavaliers, the team with the third worst record in 2012-2013 will pick first and have their second number one pick in three years, where in 2011, the team had the number one pick and used it on Kyrie Irving, a guard out of Duke. The Orlando Magic, the team with the worst regular season record in 2012-2013 will pick second. The Washington Wizards will pick third for the second straight season. They had the 7th worst record, and the 8th most chances at the number one pick for this draft. The Wizards moved up to third despite having only a 12.4% chance at a top three pick and it is a reparation for what happened to the Mystics in the Draft Lottery several months earlier.

As a Wizards fan, I personally am hoping that the team will pick Otto Porter assuming that he is not first or second, and I'm hearing talk that Alex Len of Maryland could be at number one, and that Nerlens Noel will not fall past number two. Next thing I hear, the Magic may be going for perimeter help.

Many Wizards fans could be getting OBS, or Our Boys Syndrome and just seem to want Porter just because he played at Georgetown, and to some extent Alex Len because he went to Maryland. Even Victor Oladipo is from the DC area! I'm going to be called a hypocrite by some here because I was so vehemently against Lynx guard Sugar Rodgers who went to Georgetown, and Storm forward Tianna Hawkins who went to Maryland from being the Mystics' draft pick yet I want Otto Porter.

I know the Wizards need a stretch four, but I'm not sold on Anthony Bennett who has the best chance of getting into that role. But for Porter specifically, he is a player who is a strong perimeter defender, and a versatile player on offense where he can pass, rebound, and shoot well for his size. Not the best player at any one skill, but still very good at many things and he should fit in very well in DC. Given that the Wizards are about to enter a very crucial year when some of the notable younger players, including guard John Wall are about to get sophomore contracts, and where one post player, Emeka Okafor is entering a contract year since I assume he's picking up his 2013-2014 player option worth nearly $14.5 million, the Wizards need a player who can contribute right away and hopefully get into the playoffs this year as they try to build a perennial contender. Either way, the Wizards are ahead of the Mystics in terms of their rebuilding stages in my opinion.

You can see the whole order here at NBA.com, and the order is subject to change with trades.

So that's it! Enjoy tonight's game and tonight's draft.