Langhorne comes to life in second half as Mystics spoil Fever's trip to D.C.

Sunday saw Washington pull out yet another exciting victory and extend their winning streak to three games. In their four wins, they have alternated winning by 5 and 4, and one of those contests was tied at the end of regulation. But a win is a win and the Mystics have put themselves in a good position early in the season.

Share All sharing options for: Langhorne comes to life in second half as Mystics spoil Fever's trip to D.C.

Despite not attempting a single shot (field goal or free throw) in the first half, Crystal Langhorne was nearly the game's high scorer Sunday afternoon in the Mystics' victory over the Indiana Fever.

"I tried to get some things in transition and Coach said some stuff about me getting the ball," Langhorne said when asked how she got going in the second half. "I just wanted to be more aggressive, I feel like I wasn't aggressive enough in the first."

"We introduced Crystal to her teammates at halftime and let them know that she's been on the team - maybe we should throw her the ball," Mystics head coach Mike Thibault said. "Obviously she had a terrific second half."

Langhorne was 5-5 from the field and 6-6 from the line in the second half for a total of 16 points, seven more than the next highest second half scorer (Indiana's Shavonte Zellous) as the Mystics (4-1) took down the defending champs, 64-60, at the Verizon Center in Washington, D.C.

Crystal led the Mystics with 14.7 points per game in 2012, 18.2 in 2011 and 16.3 in 2010, when she was named to the All-WNBA second team. And while Ivory Latta has been the Mystics' go-to scorer early in 2013, Langhorne reminded everyone that she hasn't disappeared, though it looked like she did in the first half.

Despite Crystal's 0-0 performance before the break, the Mystics led by as many as 11 in the first half and never trailed by more than three. In their last game against the Minnesota Lynx, they had a similar outing, leading by as much as 12 and never getting down by more than one possession. Pretty impressive to stay within those types of margins against the reigning Eastern and Western Conference champs, especially when you entered the season expected to be perhaps the weakest team in the WNBA for the second straight year.

"There's a lot of people out there who doubted us, but you all can go ahead and hush," Latta said. "We're not worried about what you all think about us. We got a great coach, we got a great eleven players with trainers and everybody else that's helping this organization get better. We believe in ourselves and that's the only thing that matters."

Ivory kept her streak of leading the Mystics in scoring during wins going with 17 points. Meanwhile, Monique Currie had a solid all-around game with 10 points, nine rebounds, five assists and two steals.

The Fever visit the White House 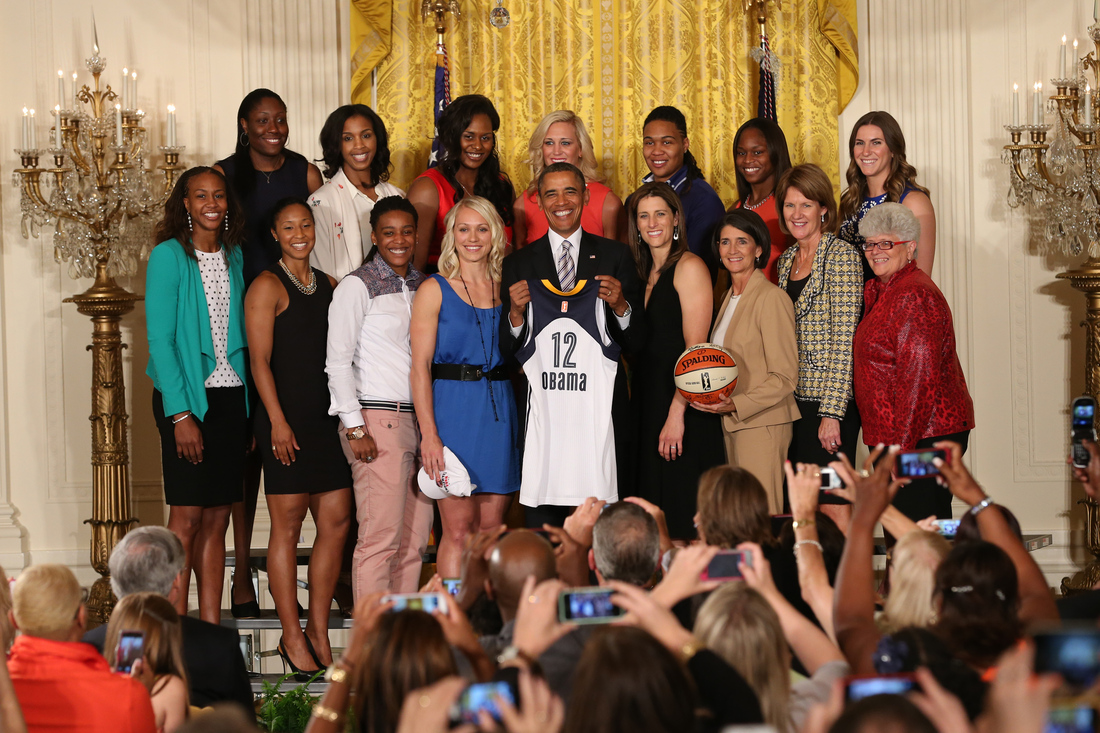 The Indiana Fever visited the White House on Friday where President Barack Obama honored them for their 2012 WNBA title.

For the Fever (1-5), Sunday's game was nearly a sweet ending to a celebratory weekend. The 2012 WNBA champions were honored at the White House on Friday, but continued their losing streak (now at five games) just two days later.

Tamika Catchings, who scored Indiana's final eight points, tied the game with a put back layup at 36.9 seconds remaining. But Langhorne was fouled on a put back attempt of her own on the ensuing possession and made both free throws to put Washington up, 60-58.

With her team down two, Catchings dribbled in to about the free throw line on Langhorne but then passed the ball away to Karima Christmas, who drove to the basket and was denied. Crystal picked up the ball, was fouled with 7.8 seconds remaining and made two more free throws.

The Fever did not have enough time for a miracle after that, as Latta cancelled out another Catchings lay in with a pair of free throws that allowed the Mystics to maintain the four-point cushion at the end of the game.

"I thought the game could go either way and we just decided to give it to them and they took it," Fever head coach Lin Dunn said. "And I don't blame them."

I think when you look at [the Mystics] it's kind of like a revamped team. They have some of the same players, but they got a lot of new players. -Tamika Catchings, Indiana Fever

Zellous led Indiana with 17 points and is averaging a team-high 18.2 on the season after averaging single figures in scoring each of the past three seasons. Catchings added 16 points for the afternoon after both her and Zellous were held scoreless on 0-8 shooting in the first quarter.

Christmas, a former Duke Blue Devil who was drafted 23rd overall by the Mystics in 2011, was the third highest scorer on the Fever with nine in her first start of the season. Layshia Clarendon, a starter in the past three games, did not play for Indiana.

The Fever were also without guard/forward Katie Douglas, who has been either their first or second leading scorer each of the past five years. Douglas did not dress due to a lower back injury and has played in just two games so far this season.

"We just have to continue building off what we have," Catchings said. "You never know game to game how many players we're going to have and who's in and who's out. So we just have to keep focusing on the things we have control over.

"I think when you look at [the Mystics] it's kind of like a revamped team. They have some of the same players, but they got a lot of new players. They have a new coach, which makes a big difference, especially when you're looking at Coach Thibault. I just have a lot of respect for them and what they're doing. So I knew coming in it was going to be a tough game. For us, we just have to keep battling."

The Fever will have five days off before hosting 4-2 Chicago, followed by a date with the WNBA-best Atlanta Dream (6-1) on June 25. They are 0-4 in conference games thus far and have learned that nothing is going to come easy in the East this year.

Meanwhile, the Mystics are sitting in second place in the East after winning three straight and are tied with the Lynx for the second best record in the WNBA. They will be tested with three road games (at Seattle, Phoenix and L.A.) next week but have looked good with a 2-0 road record thus far.

"We're going into some hostile environments," Latta said. "Going to Seattle, Phoenix and then L.A.? Man, those are some great teams. So we just gotta pull together. We're gonna see how everything goes and I know we'll have a great road trip."