Open Thread: The Sparks host the Storm and Game 3 of the NBA Eastern Conference Finals is on between Indy and Miami, all at 8:30 PM ET

Tonight, there will be games in both the NBA and the WNBA, all at the same time at 8:30 PM Eastern. In the W, the Los Angeles Sparks will host the Seattle Storm in their home opener which can be sen on LiveAccess or Time Warner Cable if you live in LA and everywhere else on NBA TV. In the NBA, Indianapolis will be at the center of the basketball world (well it's in the Hoosier state after all) as the Pacers host the Miami Heat in Game 3 of the NBA Eastern Conference Finals which can be seen on TNT.

Share All sharing options for: Open Thread: The Sparks host the Storm and Game 3 of the NBA Eastern Conference Finals is on between Indy and Miami, all at 8:30 PM ET

This is one of the marquee rivalries for the WNBA at least traditionally. But this season, though the rivalry is still there, the Storm is playing with a huge handicap because the Dynamic Duo is not playing. For the Sparks, they obviously want to win this one big to kick off the 2013 year. For the Storm, while it should try to pull off an upset as always, developing the youth should be a bigger goal throughout this year. After this game, both teams will have multiple days off before their next matches.

Series is tied at 1 a piece. If you are a Pacers fan or just rooting against Miami, the best part is that of the next four games in the series, if need be, three of them are at Bankers Life Fieldhouse. And you know those fans there are going to be REAL HYPED. If you're a Heat fan, you know that LeBron James, the four time MVP is on your side and that alone is why the Heat isn't out of the series by any means though like I said, they lost home court advantage in some ways. Check out our SBN Preview here.

I'm a big Mariah Carey fan. She's my favorite pop singer when you consider all of her music all time, but like the Boss who seems to like older music, I play her older music more than her newest tunes myself. This is her latest hit, "Beautiful" with Miguel and like the song's lyrics indicate, today is a beautiful day here in the nation's capital!

And here's the latest from Pink, "Just Give Me a Reason" which is #2 in the Billboard Top 200, Her music has definitely evolved a lot over the past 10 years when she came out as more of an R&B singer, but she's an equally good power-driven rock singer.

Our Special Correspondent has something to add...

As mentioned above, both games are at the same time. You'd think the NBA would want to increase viewership of WNBA games by having the WNBA game at a different time than the NBA Eastern Finals. Many of you also follow the NBA and are fans of various teams, and here is what our friend had to say on that: 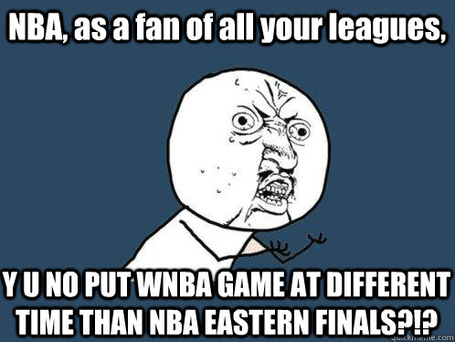 Well to be fair to the NBA, tomorrow is a bigger day, but we'll worry about that tomorrow.

It's now time to watch some basketball. Enjoy the west coast matchup in the W and the NBA's Eastern Conference Finals tonight!