If you log on to the Atlanta Dream's website, you will see a splash page with an ad to buy tickets against the Tulsa Shock and also with dates to see the Chicago Sky and the Phoenix Mercury which have Elena Delle Donne and Brittney Griner respectively. But in addition on the main site, the Dream sells a $100 two ticket package where fans can meet the Tulsa Shock guard post game. Even though I'm a fan of Diggins' game myself and look forward to seeing her in DC on June 30, this thing cannot go without a complaint.

So I decided to take a look at the Dream web site, and a splash page shows up showing Dream franchise guard Angel McCoughtry and Shock franchise guard Skylar Diggins in an ad that implies a duel type match. 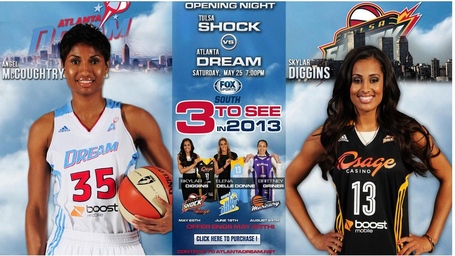 Fair enough. That's not that bad of an idea to me since we like these one on one matchups in basketball as it is. I also see that the Dream is selling the "3 to See in 2013" which has been a major punch line for the WNBA this year. I don't have too much of a problem with it in and of itself, considering that the Dream had the second lowest attendance in the league last year and had a nearly 16% drop from the 2011 season.

But I look at the main page, and I see this as a main story: 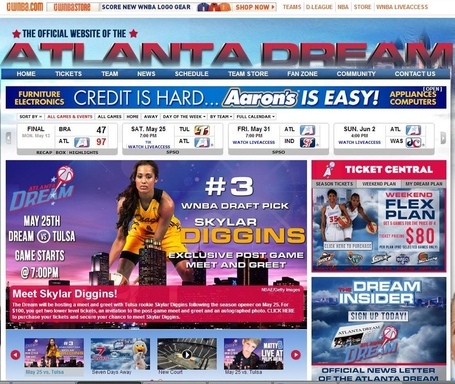 So you know, on the left and right sides of the site, you see Angel and Erika de Souza with an ad for the same home opener. But the text of the main picture here. "Meet Skylar Diggins!" And hosting a meet and greet after the game? For a second I had to make sure I was really at the Atlanta Dream's website, NOT the Tulsa Shock's. After realizing that this was in fact the Dream's website, as a guy who thinks that teams need to start building team fanbases with fans who are proud to be fans of the hometown team, this is what I'm thinking:

WHAT THE HELL IS THIS?!

Are Atlanta's top players, like Angel McCoughtry and Erika de Souza just not worthy of being marketed over a road player? Like really? I criticized the Phoenix Mercury harshly not long ago for the #ManUpChallenge. But this honestly makes free tickets to see a great team (at least on paper in preseason) an EXCELLENT idea.

I don't care if the Dream has low attendance, but not only SELLING the other team coming into Philips Arena, AND OFFERING A MEET AND GREET WITH THAT TEAM'S STAR PLAYER IS UNACCEPTABLE! It's almost like marketing this message: "Hey, take a look at this star studded team coming to our town, come watch them beat us, and then thank their best star for beating us afterwards!" I get that the Dream is trying to get some windfalls out of the Big Three's rookie season and increase attendance. But really, folks who want to see the Big Three will know these dates anyway because they market themselves.

One team I will commend for not getting into this "3 to See/Big Three" marketing campaign is the Washington Mystics. And really, if there's a team that should remotely consider marketing the other teams to a fault, it's the Mystics. First, their home page makes no mention of the Big Three in ticket campaigns. Second, their splash page image is below: 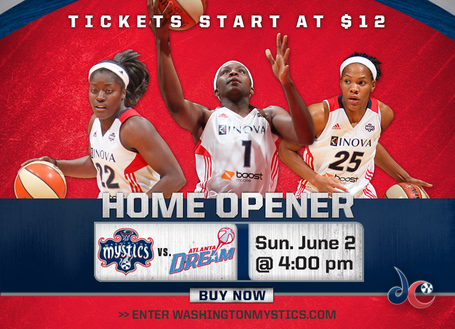 Granted, I don't think the Mystics' marketing message is perfect by any means. First, considering that the three players in the picture above only combined to get a 5-29 record last year, that's not selling much, even though I hope they'll play better this year. And the Monumental Sports marketing team seems to be afraid to showcase Tayler Hill, just because she's not a Big Three pick, but she is a guard who could have a career as good as the Big Three according to many, and looks like a core guard for that franchise. I think they need to market her a LOT more, but that's beyond the point.

The point is that Monumental Sports isn't going to sell to the other team with a meet and greet with the other team's star (at least not right now and I honestly hope not), which I also appreciate with their other teams in the NBA and NHL, despite the fact that the Mystics franchise is the most star-starved of the three. Why? Like I said, the A-list stars, like a Skylar Diggins, WILL SELL THEMSELVES! Sure, I get that there probably won't be many folks at Mystics games this year except when the Big Three come with this type of a message, but at least the team isn't marketing the other team more than its own, and all teams I think should be doing that.

Though the Mystics appear to be on one end of the spectrum in regards to the Big Three compared with other teams with not marketing the Big Three in ticket campaigns, at least not yet, since a number of other teams are doing the same to a smaller degree (merely mentioning them), I'll also give some kudos to another team, the Seattle Storm, a team that has really no superstar players, just like the Mystics in light of the Dynamic Duo sitting this year out.

The Storm has decided to market Brittney Griner in their Home Opening Night commercial. But there's a twist at around the 14 second mark here where it says "Let's give her that famous KeyArena Welcome." At least this video gives fans the "Let's give Brittney Griner hell" message when she arrives there. It also give some respect to the hometown fans to appreciate that Griner's in the league, but to let her know that supporting the Seattle Storm trumps all. Maybe the jumbotron will show images of David Stern when Griner is at the free throw line, etc. to incite the troops to boo, since after all, the Sonics aren't coming back this fall.

At the end of the day, all teams are free to do whatever they want with their marketing tactics, and maybe catering to the other teams in some instance has to be done to drive folks into the arena but it has to still promote the home team first and foremost. But the Atlanta Dream not only marketing the other team, AND offering a meet and greet with the OTHER TEAM'S star? That's a bit too much.