Open Thread: 2013 WNBA Draft is Tonight at 8:00 PM ET on ESPN2 and our quick thoughts on the Boston Marathon incident

Okay, the big day is finally here. The WNBA Draft will be held tonight at 8:00 PM on ESPN2 at ESPN Headquarters in Bristol, Connecticut.

Share All sharing options for: Open Thread: 2013 WNBA Draft is Tonight at 8:00 PM ET on ESPN2 and our quick thoughts on the Boston Marathon incident

Today is supposed to be a great day and for the league, and yes it will be. However, as you all know from the news this afternoon, there were two explosions near the finish line of the Boston Marathon shortly before 3 PM ET and there are at least some people who were injured severely.

In addition there has been a reported explosion in the John F. Kennedy Library. I hope that casualties are kept to a minimum, and that the injured people who survive have safe and speedy recoveries.

Should this be a terrorist act, and it unfortunately looks that way, let's all hope that law enforcement finds those who are responsible for this tragedy. Our thoughts and prayers go to the victims and their families.

And back to the Draft

The draft order can be found here on the league website. Barring blockbuster trades, the Phoenix Mercury will pick first in the Draft, followed by the Chicago Sky, and then the Tulsa Shock where the "Big Three" or "Three to See" players Skylar Diggins, Brittney Griner, and Elena Delle Donne are expected to be drafted, though not necessarily in that order.

The Washington Mystics will pick fourth in the draft and pick the first of "the rest." Whoever the Mystics pick may dictate what a number of teams do in the rest of the first round. Plenty of debate on who the Mystics should pick, a guard to help them right away, or a post which is the direction teams tend to go in because "you can't teach height." Given today's trade for Quanitra Hollingsworth, I'd be....... apoplectic at best if a post was drafted. Poll's below on who you think they will ultimately pick.

Like we stated last week, we encourage all of you to chime in on this thread as events unfold, whether the picks go in order as expected, or if there's some drama, in the form of trades tonight. In light of that, the Most Interesting Man in the World decided to chime in once again: 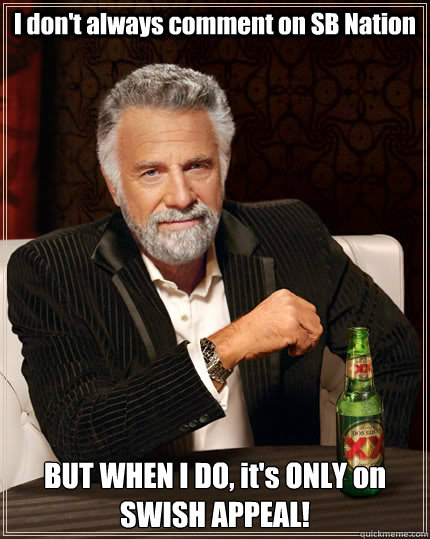 In short, feel free to chat and critique. Just don't get out of hand so Big Brother won't target you. :)

Enjoy the draft ladies and gentlemen! Enjoy celebrating that a certain player is coming to your town, or lament that she went to an arch rival!