We saw two number 1 seeds fall over the last couple days, and now we'll see which teams make the Final Four. The Regional Finals are today in Bridgeport and Spokane and here's the place to talk about it. You can watch all games on ESPN or WatchESPN in certain circumstances.

Our cryptic overlord Swish Appeal Admin gave a statement when the Sweet 16 round began, and it's safe to say that He got His wishes granted: 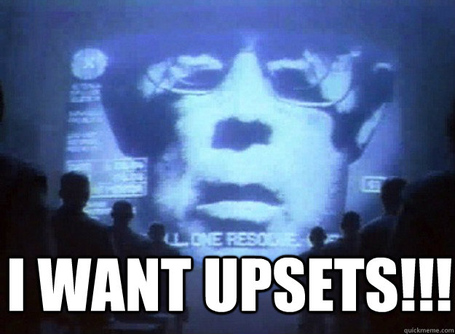 So will we see more of them today? Here's what's on tap.

This game once again will feature two WNBA first round draft prospects in A'dia Mathies for the Wildcats and Kelly Faris for the Huskies. WNBA teams with middle to later first round picks should watch this one to see what either of these players could do as a pro if in the right system.

More SBN links on this game: Geno Auriemma on being in the Elite Eight this year Greg Alan Edwards of A Sea of Blue's take on the game

The Georgia Bulldogs will go for their sixth Final Four in team history, but they haven't made it that far since 1999, when the seniors on this team were still in elementary school. Even though UGA has a more storied history, the Bulldogs will be underdogs to the California Golden Bears, another rising national power, not unlike Kentucky. And like UK Hoops, if the Bears win, they will go to their first Final Four since they're already in their first ever NCAA Regional Final.

I made a hashtag comment for Layshia Clarendon to get to the Mystics, presumably as a second round pick a couple days ago (and yes I'm sure she'll make the team), but it's very possible she could also be a later first round selection and as some have noted, she's not the best three point shooter out there and that's a need in DC. Oh well.

More SBN links on this game: norcalnick's take from Berkeley's perspective Mr. Sanchez of Dawg Sports gives a UGA take on the game

So there you have it. Today's Regional Finals with two Final Four spots up for grabs. Which teams will get there tonight? We'll find out tonight!

UPDATE: April 1, 2013, 6:15 PM ET: In case you missed it or just didn't check twitter all day, Minnesota Lynx Guard Lindsay Whalen and Tulsa Shock Guard Candice Wiggins were in Washington, DC for the 2013 White House Easter Egg Roll as the WNBA's representatives for the event. The NBA representatives were the Washington Wizards. More here.