A-Sun Player of the Year Sarah Hansen took some time to share her thoughts on the A-Sun All-Conference awards and how FGCU spent the night before defending their conference tournament championship.

For our second practice, we went to Mount de Sales. It was so considerate that they let us use their floor to get prepared for the tournament. We have so many people helping us to succeed this week; it’s such an amazing feeling knowing there are so many people behind us, wanting us to be successful.

During the second practice, we focused solely on preparation for Kennesaw (State) tomorrow. We got into defending their sets, and coach expected us to be able to do everything right the first time. We did play them less than a week ago, so we really already knew how we were planning on defending everything. We only really had a few minor changes and things to clean up.

We also worked on a few set plays we needed to clean up. When we were running one play that required Joyce (Iamstrong) to set a back screen for me, she called my name out to set the screen and her voice cracked SO badly. It was probably the funniest thing to happen all day, and everyone started dying.

At the end of practice, Coach (Smesko) announced that the all-conference teams were out. First, he told us Joyce did not make the all-conference team. I really think she is one of the best players in our conference, for sure. We wouldn’t be half the team we are this year without her. She is one of the most improved players in the nation, and I really can’t say enough about how instrumental she has been to our success so far this season.

Then he told us Jaime (Gluesing) made the All-Freshmen team. I mean, I think leading the conference in three-point percentage AS A FRESHMAN definitely counts for something, another well-deserved honor. Then coach told us Brittany was on the First Team All-Conference, and was Defensive Player of the Year. There is no doubt in my mind she is the best defensive player in our conference. She makes the other team’s best players have more turnovers than points on a consistent basis. We are so fortunate she is on our team rather than any other team in the conference. I would hate to have to try to score against her. Honestly, I believe more of my teammates could have been up for all-conference selections, but I don’t think that would look fair if the entire all-conference team was FGCU. But hey, I guess I’m a little biased. I wouldn’t trade my teammates for anything.

Oh, also congrats to the big guy, Coach Smesko for Coach of the Year. Even though he thinks I’m the craziest kid in our program, he still knows what he’s doing on the sideline.

The all-conference selections were a great way to reward people for their hard work throughout the season and a great way to start the week, but it’s definitely not what we came here for, and we have a lot left to accomplish this week. We have unfinished business from last year, and I know the returners FOR SURE are dying to prove we belong there, and the new kids want to make a statement as well. 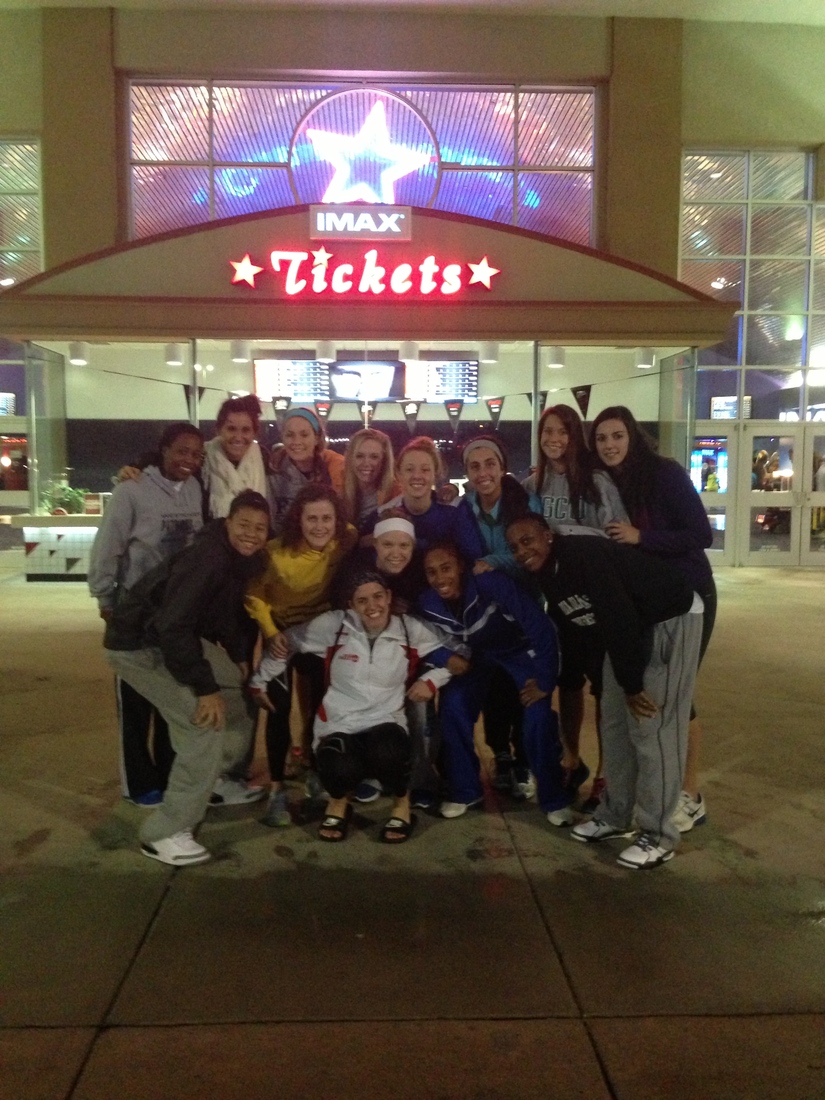 On the eve of the 2013 Atlantic Sun tournament, FGCU guard Brittany Kennedy explained how the team stayed loose, even as they focused on achieving goals, by playing a little game of tag.

After practice, we got to hang out for a while before dinner. Brittany and I went to Betsy Adams’ (Grammy) and Bethany (Murrell’s) room to play some (Nintendo) Wii. While playing Mario, Bethany fell down almost every hole possible, and Grammy did not appreciate it. It was a great way to keep my mind occupied so I didn’t start thinking about the game yet.

Now, we’re on our way to a movie, and we just had Outback for dinner. I would have to say Outback is definitely a team favorite. Some of my teammates eat Outback around 6 times a week back in the Fort. I like it because it can’t really get soggy when it sits in to-go boxes, and the food is pretty good. We had to eat it on the bus to the movies, which was a little cramped, but not too bad. We have the option to see Safe Haven or Silver Linings Play Book. Clearly we’re all into chick flicks. Again, should be a nice distraction before having to buckle down and focus on the game.

After the movie, we’ll probably head back to the hotel, and call it a night. It’ll probably be a while before I can fall asleep. My mind just starts racing before big games, and this next game determines the rest of our season right now. It’s win or go home, so we really have to play our best from here on out. Time to focus, and do what we know how to do. If we play together like we know how, hopefully the tournament will go how we want. Nothing else to do but play at this point. This is what it all comes down to.

For more on FGCU's journey through the post-season, visit our A-Sun Tournament storysteam.