Michigan Wolverines Jenny Ryan, Kate Thompson pick up All Big-Ten honors for the first time in their careers

Jenny Ryan as well as teammate Kate Thompson earned All Big-Ten honors for the first time in their careers, marking the first time in over a decade that a pair of Michigan Wolverines have received conference honors in a season in which the team has made huge strides themselves.

Share All sharing options for: Michigan Wolverines Jenny Ryan, Kate Thompson pick up All Big-Ten honors for the first time in their careers

One of the most memorable moments of the year for me as a Michigan alumnus was when guard Jenny Ryan badly hurt her ankle against the evil rival Michigan State Spartans.

But objectively the best moment? Watching Ryan and the Wolverines beat Michigan State for the first time in her career.

As Mechelle Voepel tweeted last night, it's sort of the cool thing about seeing college players stay in college for four years: for so many, there are opportunities to resolve loose ends that simply wouldn't be possible to negotiate if they chose to leave for greener pastures, or fatter bank accounts, on another stage.

Jenny Ryan got that, finally beating Michigan State and earning herself third-team All-Big Ten honors from coaches and media. 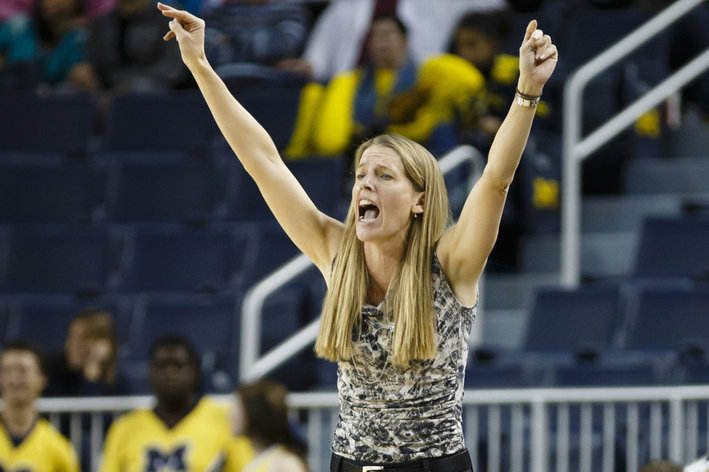 The moment Michigan hired Kim Barnes Arico to fill the vacancy left by Kevin Borseth, things were looking up for the program. But we probably didn't expect this type of historic success so soon.

This is not to ignore teammate Kate Thompson, whose story of hard work and development in her senior year is inspiring to say the very least aside from earning her All Big-Ten second-team honors. But Ryan stands out first because all season during Big Ten Network broadcasts of the Michigan Wolverines, commentators have noted how new coach Kim Barnes Arico wouldn't trade her for any player in the country. If that sounds familiar to you, it's probably because you've heard similar things about Kelly Faris during UConn Huskies broadcasts. She was a do-it-all player who spared nothing to do what her team need to win.

I lay that out because, second, when we started to "narrow" our list of 2013 WNBA draft prospects prior to the 2012-13 season using two separate lists of statistics that James and I put together, she ended up on a list of 15 that never got published. Understanding the comparison as "Michigan's Faris" helps to explain how that happened and why she was not part of that final list of 13.

I'd say the primary reason Ryan was on that list of prospects was that she was extremely efficient as a distributor during her junior year. And, like Faris, Ryan was efficient as a scorer last season while rebounding well for her size and having an impressive steal rate. Yet also like Faris, Ryan had a very low usage rate, meaning she wasn't particularly involved as a scorer (6.8 points per game last season), which generally doesn't bode well for guards with WNBA aspirations.

So this year figured to be a test for her: as a senior with key players having graduated it was obvious before the season that Ryan would have to step up. And not only would she have to "step up", but she had to move to playing point guard full-time and put that impressive distributing efficiency from her junior year to the test.

Suffice it to say that Ryan's efficiency went down as she was forced to take on more responsibility in Michigan's offense and diminished some of that draft value that her junior year statistics suggested she might have. Still, she was the heart and soul of this historic Michigan team as best represented by giving it a go against Michigan State when she was clearly limping and hitting the clutch free throws against MSU when they finally beat them. I'd probably be mildly surprised if she was drafted, but I'll still be rooting for her (and Thompson too) to have her name called on draft day because the WNBA could use a little more Wolverine Excellence among its ranks.

But I also don't think not getting drafted should diminish what Ryan accomplished this season or over the course of her career.

There are quite clearly big things ahead for Kim Barnes Arico in Ann Arbor, even if this season might not mark the year that the Michigan Wolverines women's basketball program really turned a corner: former coach Kevin Borseth's team from last season might deserve that honor for getting the team back to the tournament. But no matter where we demarcate that turn for the better, it will be hard not to look back and pinpoint this particular class of seniors; if nothing else, this class probably deserves the credit for making women's basketball relevant on a campus that has a number of other sports competing for the attention of students and alums. And that's something special that nobody can take from her.

Ok, but really it's just awesome that they beat Michigan State. Go Blue.

For more on Michigan's honorees, check out MGoBlue.com. For more on the 2013 WNBA draft, check out our draft prospects storystream.

Who are the top prospects for the 2013 WNBA Draft?