The top seeds held true in the first round of the 2013 NCAA Tournament at Carnesecca Arena. The first game saw press row types asking the last time a 15 seed knocked off a number 2. After the first few minutes of the second half, that was a moot point. Game two saw a classic, plain and simple.

QUEENS, NY - Their own admission revealed the fact: they had not seen a team like this before.

Navy battled gamely but in the end came up on the short end of a 61-41 decision at the hands of Kentucky.

"They are bigger, stronger deeper even in warmups - I counted 10 extra people out there helping them warmup," Navy coach Stefanie Pemper said after the game.

"The speed of the game, probably affected us a bit," added Navy's Jade Geif.

Good points but Navy was competitive for a half. The numbers:

Interesting note how Navy, not a team to turn you over, forced Kentucky into 19 turnovers.

"I think it was largely due to being scrappy," Pemper said. "But their rebounding edge more than made up for any edge we could get forcing turnovers."

The rebounding edge was especially necessary in yesterday's game as the Wildcats' outstanding senior guard, A'Dia Mathies, did not hit a field goal for the first time in her career. She finished with five points going zero for five from the field.

"They have other players they will go to," Pemper said. "Also we saw on tape the best way to defend her was denying her the ball. Alix (Membreno, Navy's junior guard) did a great job in that area."

Once again those first four minutes following intermission proved crucial. Navy led 26-25 at the half. By the 16 minute media time out Kentucky enjoyed a 37-30 edge, never to look back. That was a game changing 12-4 run and it was set up by an open three by UK's Jennifer O'Neill. At that juncture there was still time left but Kentucky was now playing as the aggressor.

Navy did not have a double digit scorer though: Geif and Membreno both had 9 points. Kentucky was led by DeNesha Stallworth. The 6-3 junior center scored 18, added a game high 11 rebounds and proved a threat on the blocks or outside. Navy closed the season at 21-12 while Kentucky improved to 28-5.

Matthew Mitchell, in his sixth year at the helm in Lexington, has now gotten the Wildcats past round one for the fourth straight season.

Crunching the numbers allows us to look into the game closer. View things from a different perspective. But sometimes the crunched numbers fail to explain the why or logic of it all.

Both showed excellent turnover rates but there the numbers are misleading. Dayton struggled against the St. John's full court press the last four minutes of regulation. The Flyers led by 10 with just over four minutes to play. St.John's then rallied behind their pressure. Forced turnovers leading to easy baskets gave St. John's the momentum.

The free throw rate displays a point made by Dayton coach Jim Jabir after the game: he felt the Flyers allowed too much lane penetration by the Red Storm.

"We got some charges, but not enough," Jabir said. "They got in the lane and we should have had a few more (charges)."

On the St. John's side, coach Joe Tartamella felt Dayton was able to shoot their threse too much to his liking.

"That's their game but give a team seven threes it's tough to win," Tartamella said.

A big win for Dayton 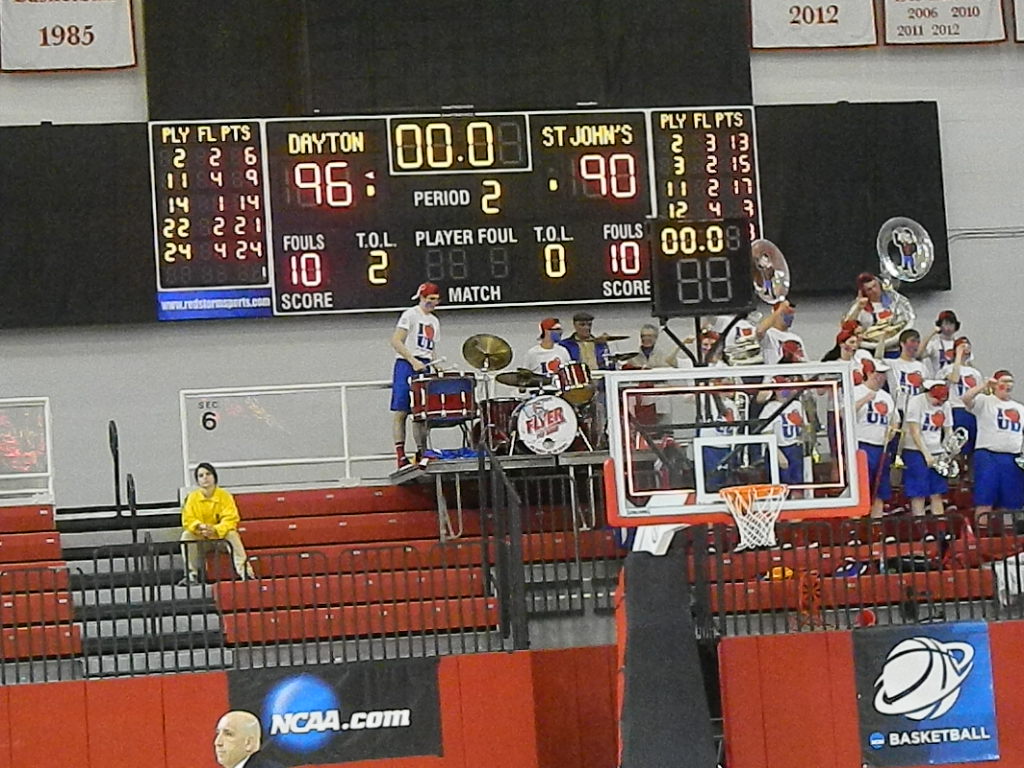 The Dayton band continued to play on after their win, which was their first in the tournament since 2010.

"Without Ashley's contributions," said St. John's senior Shenneika Smith, "we do not have an overtime(s)."

After playing the first overtime even, Dayton struck early in the second OT and that gave the Flers a lift in confidence. And a lift to round two.

St. John's finished at 18-13 while Dayton advanced to 28-2. Jabir said he planned to go back to his room and watch Kentucky tapes. He did admit that, "I will savor and enjoy this one for awhile. Even while watching Kentucky."

For more on both of these games, visit our Bridgeport region storystream.