Open Thread: The "Big Three" and their teams get ready to play in the first round of the NCAA Tournament

After 32 teams squared off yesterday, the other 32 teams that didn't play yesterday get to show what they can do in the first round of the NCAA tournament. Games start at noon or so Eastern Time, all available on ESPN3.com, and ESPN2 will also cycle through games as appropriate.

Share All sharing options for: Open Thread: The "Big Three" and their teams get ready to play in the first round of the NCAA Tournament

The interesting thing today is that Baylor, Notre Dame, and Delaware, the teams with the 2013 WNBA Draft class' "Big Three" will all be playing today, and it doesn't seem like it is any accident that Elena Delle Donne and the Delaware Blue Hens play at 12:15 Eastern Time, Skylar Diggins and the Notre Dame Fighting Irish will square off at roughly 5:00 PM, and Brittney Griner and the Baylor Bears will square off at 7:30 PM.

In short, fans interested in these big three prospects, will have a whole afternoon to watch these three potential game changing prospects without having to decide which of those three to watch at any time.

Here's the whole schedule, all times are in Eastern Time.

So enjoy watching the basketball in the NCAA Tournaments, and hope your bracket does well. Looks like I'm not winning anything at this point. Look below to see why and I failed to even say that Kansas was going to beat Colorado on this bracket too (oh well, look at it and feel free to laugh hard at me): 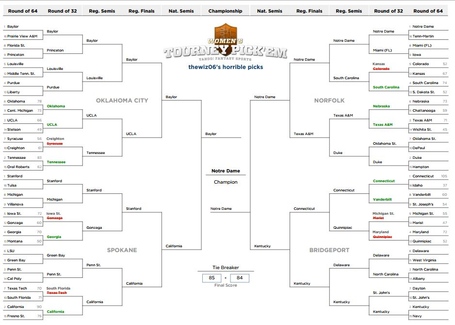 Warriors and Wizards game in Oakland...

And to "add to my grief," in yesterday's Washington Wizards game against the Golden State Warriors in Oakland, they were never really in it, losing 101-92. John Wall even got ejected after taking issue after getting knocked down by Klay Thompson. Nate was at the game enjoying a well earned period of R&R after working triple overtime by writing updates on what happens with the NCAA women's basketball tournament and even managed to sneak in the open thread for our Warriors SBN blog, Golden State of Mind.

Apparently the jumbotron at Oracle Arena had malfunctioning issues to the extent where our own Jessica Lantz who was also at the game noted that the scoreboard made it seem that the Warriors were beating the Wizards by more than just 82-64 at the time..

Well I guess this loss for the Wizards also explains why Nate and Jessica are higher up the SBN food chain than me, hahaha. (*Awaiting Swish Appeal Admin's wrath* Is Big Brother also a Warriors fan too?) The Wizards did enjoy a 2-2 road trip so it was still successful but I wished it was still a 3-1 trip considering that they shouldn't have lost to the Bobcats. Anyway, that's beyond the point.

Bottom line: There are 16 more games featuring the remaining 32 games that have yet to play in the 1st round of the Dance. Hopefully we will have a chance to see more great basketball from all sides, and maybe some upsets too. So enjoy today's games everyone!