You see this happen to the men. In this regard the women are not different. The treasured NCAA bid, so close, does not materialize. The NIT, or with the women, WNIT comes calling. Players are still fighting through the hangover of NCAA disappointment. The mind and body both refuse to cooperate. Getting ready is a chore for a head coach.

Share All sharing options for: Fordham's defense was key to winning WNIT opener

BRONX, NY - Following the day off after Saturday night's A-10 final, Fordham coach Stephanie Gaitley texted her players reminding them that while Saturday proved a disappointment, the WNIT was giving another opportunity. A chance to extend their season. The tournament is post season play and at least one round would be right at home with a game at Rose Hill Gym.

In the end, Fordham accepted the challenge and defeated Patriot League regular season champion Army 55-46 on Thursday. To little surprise, defense was the key to game.

"We are a good defensive team," Gaitley said. "We spend a lot of time in practice on defense as our priority. Our key, especially with the guards was to force them to take difficult shots."

Army coach Dave Magarity praised the physicality of Fordham. Not just in their freshman interior player Samantha Clark but out on the perimeter as well.

"They are used to playing in the Atlantic Ten," Magarity said of Fordham. "I thought they were just physical on the perimeter. There were bumps and hand checks not called."

Magarity was stating a point, not using the officiating as a reason for his club's offensive struggles.

Overall their guards are seasoned veterans," he added. "They put a lot of pressure on the ball and [the Fordham guards] are really good players."

Fordham knew the duo of Anna Simmers and Kelsey Minato would produce points for Army. The idea was to wear them down and ensure no one else would step up. Mission accomplished.

Simmers tied for scoring honors with 15 points and Minato added 13. They were Army's lone double digit scorers. The pair combined for two thirds of Army's shots, yet they hit 12 of 340, just 30%. 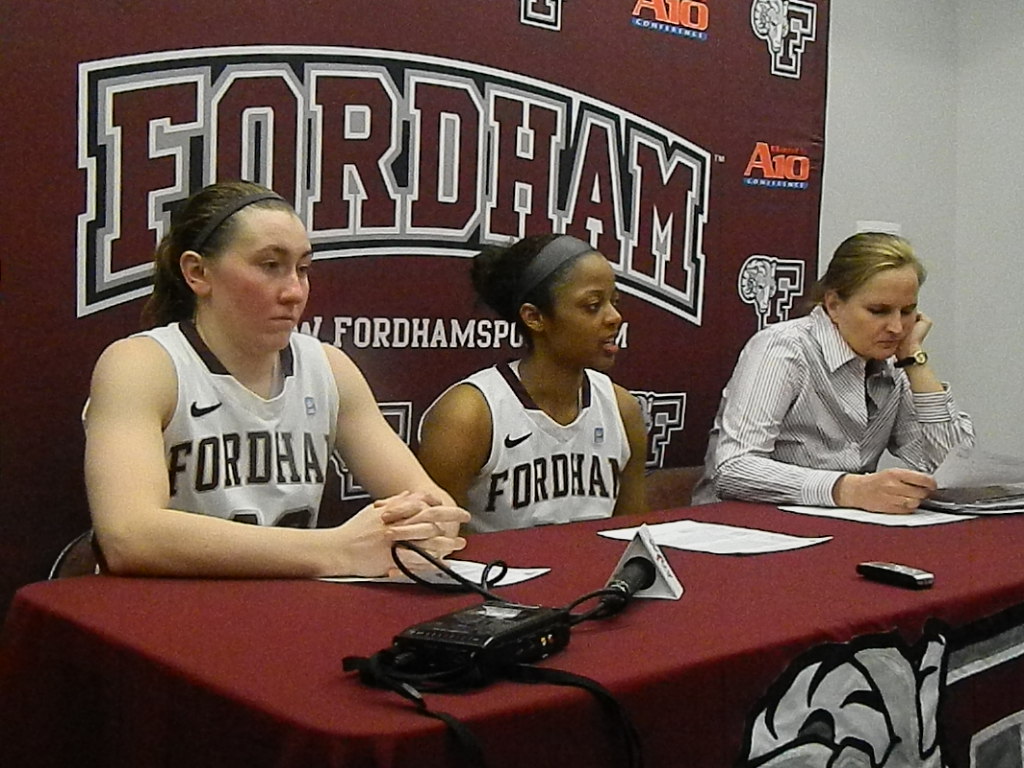 Fordham held Army to an effective field goal percentage of just 35%, which helped them get a win in the WNIT.

On Fordham's end there were three players in double figures. Marah Strickland and Abigail Corning hit for 15 points. A junior guard, Corning added 11 boards. Contributions extended beyond the starters.

Over the course of the last four minutes the Rams managed one field goal. It was a beat the clock perimeter shot by Charlotte Stoddart. Her only two points of the night that proved the 'dagger'. As Stoddart's shot fell the lead was up to 47-40 with 2:40 to play. The Rams then closed it out on the free throw line.

Fordham led 24-17 at the half. Interestingly Gaitley though her team was 'out toughed'. During halftime, "we challenged our kids to toughen up and meet the challenge," she said. "They responded."

And now the Rams have a round two date with Boston University.

"We defended," Magarity said. "We got some stops but scoring was a problem. A few more baskets and in the stretch, who knows, it could have been a different game."

Note: A first loss at Rose Hill for Magarity, a former coach on the men's side. He assisted Pat Kennedy at Iona and was part of ten straight Iona wins over Fordham with Tom Penders.

"My streak ended," he said later in jest. "But it was a close one tonight."