Fordham opens WNIT play with a 55-46 win over Army

The Fordham Rams regrouped to win their first game in the WNIT after narrowly missing a NCAA Tournament bid.

Share All sharing options for: Fordham opens WNIT play with a 55-46 win over Army

BRONX, NY - Following a tough Atlantic Ten final loss to St. Joseph's, resilience and opportunity were the key as Fordham defeated Army 55-46 in the WNIT opener at Rose Hill.

The pertinent numbers from Thursday's meeting:

Overall Army coach Dave Magarity was pleased with the effort. The frustrating thing for the Army coach was the inability to make shots.

"I'm not talking just jump shots," Magarity said. "We had layups and looks at the rim not go down." 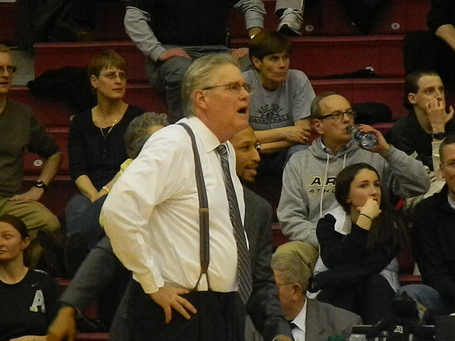 Army not only was better in the turnover rate, but led 14-5 in points off turnovers. The Cadets also won the boards. Free throws were actually closer than the numbers suggest. The difference in FT rate came as Army was in a late game fouling mode putting Fordham on the line to get the ball back. Regardless, Magarity would have liked more than 6 attempts (to Fordham's 14). In the end, it came down to the Rams' ability to defend forcing Army into a 35% eFG mark which included 3 of 14 (21%) from three.

On Fordham's end the game plan was to make life tough for Army's two best players guards Anna Simmers and Kelsey Manato. Fordham coach Stephanie Gaitley, who spends a great deal of time on defense with her Fordham club, was successful in that regard. Simmers tied for scoring honors with 15 points while Minato was Army's only other double figure scorer with 13. Yet combined they were forced into a 12-for-40 (30%) shooting night. No one was able to take up the slack for Army.

The day after the A-10 setback was a day off. Returning to practice at first showed a sluggish mood. Gaitley challenged her club in a positive way emphasizing the past is done, the WNIT would be a new challenge and opportunity.

"We had a really good practice leading up to this game," said Strickland. The results showed.

Fordham improved to 25-8 and captured the program's first post season win since 1980. Army finished at 22-9. Magarity was thankful for the WNIT experience.

"We won the Patriot League regular season (including a sweep of NCAA bound Navy)," he said. "Then lost to Colgate in the conference quarterfinal. To end the season like that would have been very tough. I'm glad we had an opportunity like this for another tournament."