For the WNBA fans who haven't followed the NCAA women's college basketball season very closely, we'll do a bracket-by-bracket look at a few WNBA prospects in the 2013 NCAA Tournament. Today we'll begin with the Bridgeport region; while you've probably heard something about the highly touted Elena Delle Donne, there are a few others worth keeping an eye on as well.

We entered the year focusing on a set of 2013 WNBA Draft prospects that we've followed throughout the year, but - aside from the obvious three players - a lot of it was based on optimistic speculation or, perhaps in some cases, hope.

Even with the help of statistical wisdom gained from past prospects, It's hard to ever really know how a player will respond to the pressure of leading a team in their senior season: some who had a chance regressed, others whose junior year statistics weren't so promising have improved.

Yet come tournament time, it's much easier to start narrowing the field a bit to those who might definitely be draft-worthy and those who will probably have to go pro in something our than (U.S.) basketball. And as part of our NCAA Tournament previews, we'll include a WNBA Draft primer for you WNBA fans out there.

Ed Bemiss of National Sports Rankings has a NCAA player rating for each team in the nation, which includes a draft range projection. So to aid in our draft coverage, we'll take a closer look at a few of the players among his ratings. 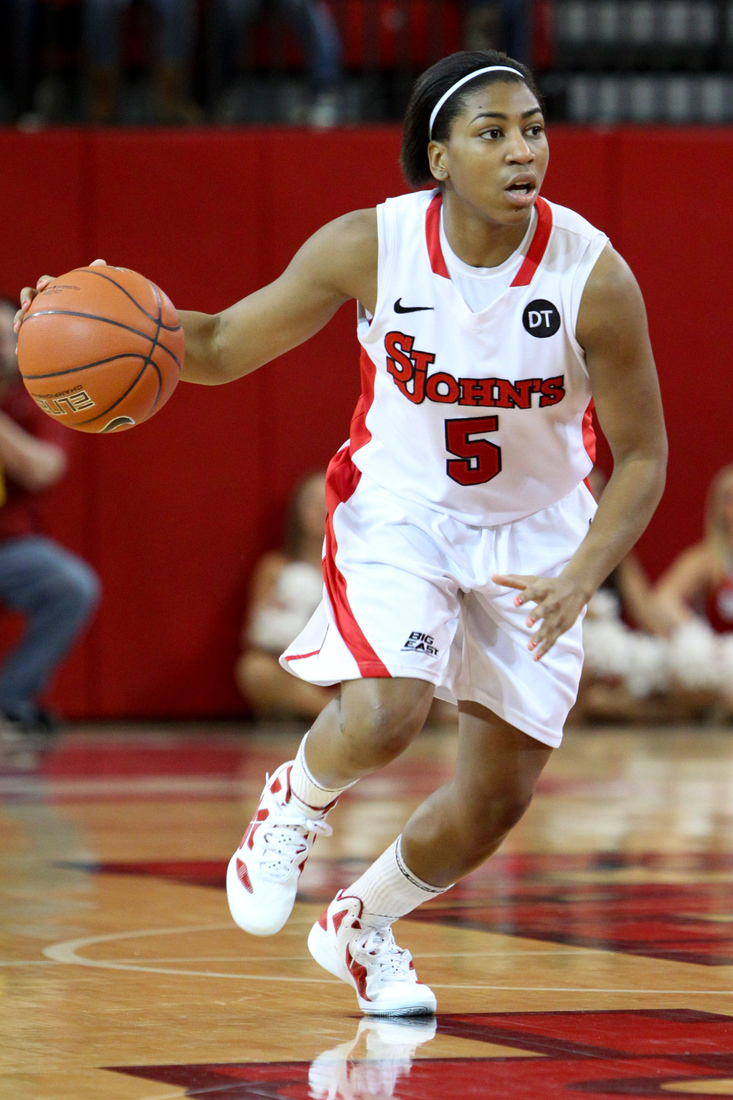 We haven't had an extensive analysis of McKenith as a draft prospect, but a 20 point, 8 assist, and no turnover game against Cincinnati demonstrated her value as a floor leader.

First a few players who we've already looked at closely or discussed in the past and won't elaborate on at this time:

So now we'll pay closer attention to some additional players that have an opportunity to impress WNBA GM's under the spotlight of the NCAA Tournament.

Tiffany Clarke was a load in SEC play this year, most recently helping the Commodores score a big win over Texas A&M with a 30 point, 7 rebound performance late in regular season play. Vanderbilt relies heavily on her for offense and their ability to establish her in the post will go a long way to keep them alive in the tournament.

Going strictly by the numbers, Clarke is the strongest of this group of "new" prospects for a rather simple reason: she is a very good offensive rebounder (13.15%). That combined with a reasonable scoring efficiency (56.11% true shooting percentage) and strong free throw rate (49.73%) certainly puts her in the discussion as a draft prospect.

Yet there are two significant red flags for Clarke as well, which could hurt her a bit on draft day. First, she's a very inefficient ball handler (pure point rating of -7.21), which does not bode well for WNBA success. Second, post players under 6'2" haven't fared well in the past unless they have dominant numbers or a perimeter game like Danielle Adams.

Dunning might not be high on anyone's draft list, but she might end up figuring prominently into West Virginia's first round game against Delaware - she gives the Moutaineers a huge advantage in the post if she can establish herself and score, but she has been a foul prone player who could just as easily hurt her team's chances by fouling her way off the floor.

Despite having size and the ability to score with her back to the basket, her numbers are beneath the threshold of a successful prospect from the last five years which makes it unlikely that she would be able to make a roster.

MacKay has put up key numbers comparable to successful point guards in the past: she has a pure point rating of 2.66 and a points/empty possession ratio of 1.68, complemented by a 2-point percentage of 50.74% - she has been a very efficient playmaker on a team that has been among the program's best.

However there are two reasons to wonder whether MacKay could make it at the next level. First, she's a guard with a low free throw rate (16.6%) and low offensive rebounding percentage (1.18%) even by guard standards, which are both proxies for athleticism at the guard spot and might be signs of a struggle to create for herself or others in the pros. Second, mid-major prospects have really struggled to find a place in the league in recent years and really only the most dominant ones have made it; her MVP rating of 10.51 is well beneath the threshold for a successful mid-major prospect over the last five years.

If Dayton is going to beat St. John's and their athletic backcourt in Queens, chances are that MacKay will have to perform well.

North Carolina's success this season begins with their defense: in addition to forcing turnovers that lead to easy scoring opportunities in transition, they have one of the best shot blockers in the nation patrolling the paint.

Senior Waltiea Rolle is in the top 30 in the nation in block percentage with a strong 6.2% rate and that will probably draw the attention of general managers looking for someone to defend the rim, as Bemiss' rating suggests. On the other end of the floor, her offensive rebounding percentage (11.32%) is strong enough to suggest that she could compete on the boards.

The problem is that her scoring efficiency (51.04%) is beneath the threshold of a successful center prospect over the last few years and she neither gets to the line nor converts free throws very often considering her size. In the end, you can't teach height and it's likely that someone will look her direction on draft day.

The combination of Rolle's size on the interior and Ruffin-Pratt's size and athleticism on the perimeter is a primary reason why UNC has to be a strong Sweet 16 contender - there simply aren't a lot of teams that will find an answer to both on a regular basis.

With Ruffin-Pratt, the things that stand out are that she's can probably hold her own with any point guard in the nation athletically: despite having a low offensive rebounding rate (2.66%), she has an extremely high free throw rate (50.49%) and an extremely high usage rate for a point guard (28.69%) which suggest that she can find a way to score. The problem is that she hasn't done so particularly efficiently: even as a player that takes a lot of shots, you'd hope for a higher true shooting percentage than 46.55%.

But what might make Ruffin-Pratt something of a wild card is that she has improved her scoring efficiency dramatically over the course of her career even as she's taken on more responsibility and moved to the starting point guard spot in her senior year - her junior year true shooting percentage was 35.7%. That's quite a leap.

Could the combination of physical attributes and signs of growth make her an interesting pick for a team look for a guard who will battle in camp? Sure - it might not be in the second round, but she might deserve a look and a few impressive tournament performances would only help her cause.

It's not like you haven't had an opportunity to learn about Smith from Queenie's pieces on the Red Storm over the years, but although she wrote an explicit piece on McKenith earlier in the year there hasn't really been a specific piece about Smith this season so here we are.

And what's immediately striking about Smith is her agility and quickness as a 6'1" wing. Along those lines, one sort of subtle thing that stands out for her is that she was second in the conference in blocked shots (2.2 per game) and yet picked up surprisingly few fouls, which reflects pretty good defensive instincts for a perimeter player. She might not be among the elite in terms of steals, but she's definitely a defensive presence.

What might hold her back as a prospect is that she isn't a particularly efficient scorer (44.59% true shooting percentage), but that's not at all surprising considering the scoring load that she plays such a large role in the Red Storm's offense (31.12% usage rate). Against Dayton in the first round and especially Kentucky in the second round, getting efficient scoring games from her could make a difference.

For more on the 2013 WNBA Draft, check out our prospects storystream.