Having already looked at Wednesday's contest from a St. Bonaventure Bonnies perspective, today we take a look at things from the Fordham Rams' side of things before they finish out their regular season slate with Temple on Sunday. While the Bonnies have endured a difficult season after last year's success, the Rams are headed in the opposite direction.

BRONX, NY - In the first half of the Fordham Rams' 62-50 victory over St. Bonaventure on Wednesday, the shots found nothing but net.

Ram coach Stephanie Gaitley will be the first to admit her club was on a roll. A 29% three point shooting team, Fordham hit 9 of 13 - that's an off the charts 69%. They entered halftime ahead by fourteen 41-27.

The second half saw a challenge.

"We didn't shoot as well," Gaitley said. "But credit Bonaventure's defense for that."

That double digit lead was reduced to one possession. It stayed that while for a few minutes before Marah Strickland hit a big mid-range jumper to give the Rams a little breathing room.

In the stretch, Fordham made the plays and showed the poise that allowed them to post 20 prior victories. They closed out A-10 victory number eleven against two losses.

"Fordham is not only talented," St. Bonaventure coach Jim Crowley praised. "They have very good chemistry."

A great deal of the success this season and general reversal of fortunes must be given to Gaitley, a veteran coach, a proven winner, who has taken the women's program at Rose Hill to new heights. She is the first to defer and credit the school's administration for the commitment necessary to turn things around.

"The administration has been outstanding in their support of the program," Gaitley said. "They have been committed to the women's and men's program and while we are having success the men are headed on the right track and I am certain beyond doubt, Tom Pecora will turn the men's program around."

Gaitley was reminded, the critics say Fordham talks about competing but sometimes does not follow through on what is needed.

"I can truthfully say there is a better commitment (including budget) than any place I have coached at previously," Gaitley commented.

Gaitley's most recent stops were in the Northeast Conference at LIU and Monmouth respectively. But she does have 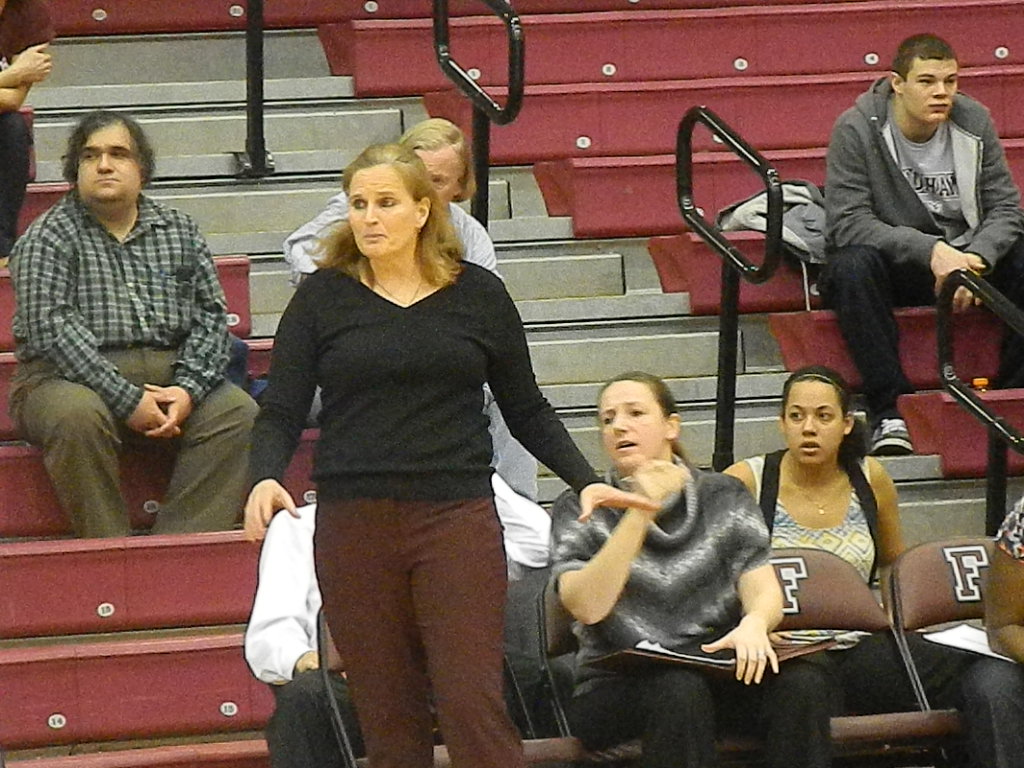 Fordham coach Stephanie Gaitley had a few tense moments down the stretch in Wednesday's win over St. Bonaventure, but was not a bit surprised the Bonnies were resilient and battled back.

Last season Gaitley arrived at Fordham and progress was starting to show. A 12-18 record on the surface did not command notice. But nine non-conference wins, the most since the 1989-90 season, proved things were falling into place.

This season the Ram slogan was 'tradition begins now'. Slogans are nice in October and sometimes are forgotten memories by March. This case is an exception.

The 20th victory came the past Sunday, an especially satisfying overtime win over St. Joseph's. During this season the Rams have captured ten non-conference games, the most since 1983-84. The 14 A-10 wins to date under Gaitley, is more than Fordham's prior six seasons combined.

Gaitley is largely responsible for changing the culture here. She will be the first to say you need players. There is a strong mix of experience and youth. The starting lineup includes two seniors, a graduate student, a redshirt junior and highly regarded freshman.

The graduate student is the aforementioned Strickland. The 6-foot forward began her career at Maryland. She then transferred to South Carolina before moving on again to play at Fordham. Strickland sat out last year with an illness and was granted an additional year of eligibility. The team's leading scorer at 14.6 points per game, due to her transferring and sitting out Strickland is 24 years old, lending maturity on and off the floor.

Junior guard Erin Rooney came to the Bronx after having played for Gaitley at Monmouth. A native of New Zealand, Rooney is the latest of international players Gaitley actively recruits. The freshman is 6-2 forward Samantha Clark. The New Jersey native has been selected A-10 Rookie of the Week a program record five times.

The regular season ends with a meeting at Temple on Sunday. Next is the post season. In past years getting to the Atlantic Ten Tournament was a challenge. Should they be eliminated in the A-10, it is safe to say the season will continue.

Through it all, Gaitley still emphasizes the concept of defense and "playing hard." Tradition may be beginning at Fordham. Those principles preached by Gaitley have been part of her coaching foundation for nearly three decades.