Prior to Selection Monday we looked at a set of teams to watch and shortly after the selection show we looked at some surprises, games to watch and key questions. Today, six of us from the Swish Appeal team are going to make a few predictions to preview how we might imagine the tournament unfolding. For more updates and previews of the tournament, visit our 2013 NCAA Tournament storystream.

1. What's an upset you're going to look out for?

James Bowman: In the Spokane braket, #11 Green Bay is 29-2 under Kevin Borseth and winners of their last 24. #6 LSU has 11 losses this year, some of them rather inexplicable. I would make this one my candidate for Most Likely Upset of the tournament.

M Robinson: Gonzaga over Iowa State and USF over TTU

Nate Parham: If you eliminate lower seeds with a chance to win at home, my first instinct was Marist over Michigan State.

Richard Kent: Upset Marist (12) over Michigan State (5). Brian Giorgis is that good of a tournament coach and his teams play great defense. Elizabeth Beynnon is a great player. They have won 21 in a row.

thewiz*: I'm going with Princeton vs. Florida State. Sure, the Tigers are a number 9 seed, but seeing an Ivy League team advance to the 2nd round in this tournament would just be downright cool. Second, Kansas vs. Colorado in part because this is a former Big 12 conference matchup in a 5 vs 12 seed matchup.

2. Who's your top "darkhorse" candidate (a team seeded 7th or lower who could make the Sweet 16)? 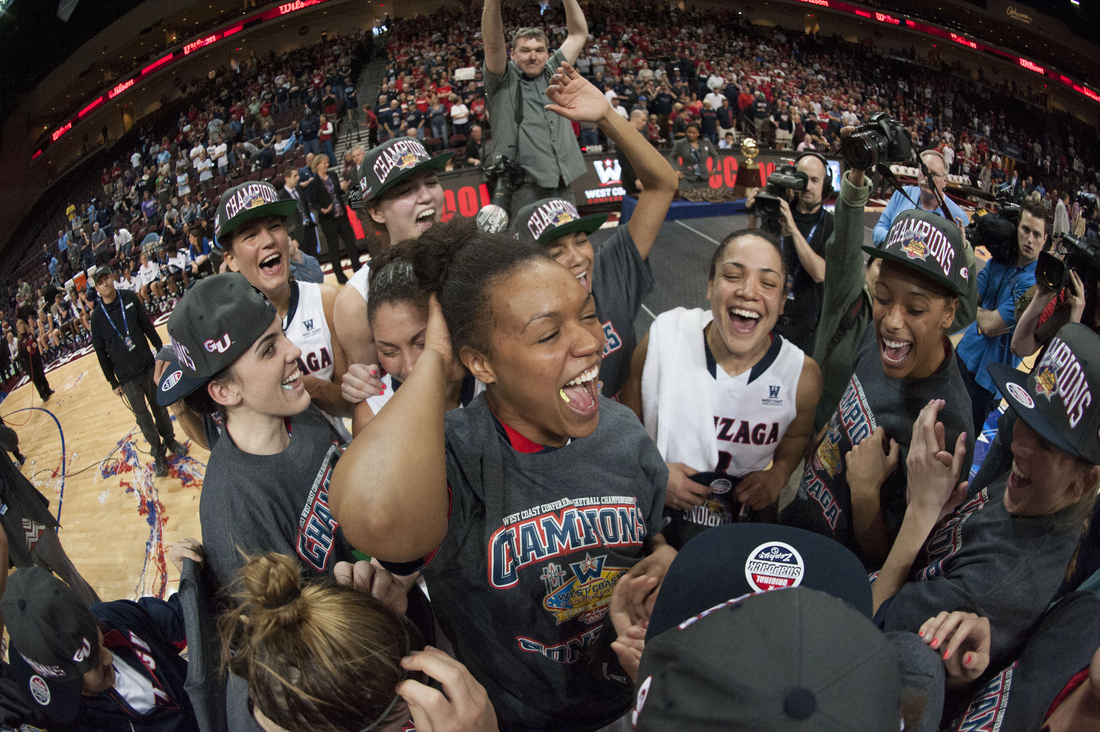 The Gonzaga Bulldogs not only have home court advantage, but also have some momentum heading into the 2013 NCAA Tournament.

JB: Let's go with Chattanooga. They could beat Nebraska, and then beat #3 Texas A&M in the Norfolk region - the Mocs are closer to home and the Aggies are only 6-4 over their last 10 games including losses to LSU and Vanderbilt. It is entirely plausible that Chattanooga could end up in the Sweet Sixteen.

MR: Gonzaga in the Spokane region, but I'm almost certain that others will pick that too. Marist is another one.

NP: If you're going to tab one, Gonzaga has to be the top choice, but I do see Syracuse as having a chance at giving Tennessee a run in Knoxville if Isabelle Harrison isn't able to go.

Queenie: Gonzaga, but only because of home court. My Yahoo bracket has Gonzaga and West Virginia, but my ESPN bracket has nothing below a 5.

RK: Dayton. This is Jim Jabir's best coaching job. They are deep and talented. Andrea Hoover can play.

thewiz: I could see Gonzaga do it again as a 12 seed. Though, this may not make Zack happy, I'll also pick Quinnipiac because they have nothing to lose. The Bobcats have some strong shooting so if the Terps aren't defending the three and rebounding as strong as they can, this could be a big upset.

3. Who's your biggest "wild card" team (a team that could either go much deeper than their seed suggests or find themselves out early)?

JB: Delaware. Their most likely opponents are West Virginia, North Carolina, Kentucky and Connecticut. If Delle Donne gets hot, they could rip right through that bracket, but one bad night from Delle Donne and the Blue Hens could get plucked.

MR: Out Early: Delaware - they could lose in their first game to WVU, WVU is physical and play rugged defense. Also, Dayton, they got a bad draw playing a hot St. John's team in Queens. Further than their seed: St. John's.

NP: Penn State. They could ride hot shooting to the Final Four or go cold and find themselves unable to crack the Sweet 16.

RK: Wild card team-Kentucky. They can make it to the regional final against UConn or lose in the second round. They have not had great NCAA success under Matthew Mitchell despite having great talent.

thewiz: I'll go with Delaware. Sure, they could make a run to the Elite Eight and maybe even beyond with Elena Delle Donne, but they could lose earlier than expected too as well.

4. Who makes the Final Four?

5. Which bracket are you most looking forward to watching as a fan?

RK: Spokane. I really want to see Stanford play Cal again, especially on a neutral floor after they each beat the other on the other's home court. They play contrasting styles and are both well coached.

thewiz06: At least from the standpoint of being a Mystics fan, I will probably watch Maryland, UConn, and Texas A&M more closely because their top seniors: Tianna Hawkins, Kelly Faris, and Kelsey Bone should she go pro this year appear to be players who are those who Mike Thibault may be wanting to draft. Should either of these three make major contributions and perhaps be a major factor as to why their teams advance far in the tournament that could be a way to make a great last impression on Coach Thibault and his staff and could be a tipping point in their favor. I'm strongly biased on which positions the Mystics shouldn't pick, and I have made no attempt to hide it, but even I can be swayed one way or another if these prospects play at a very high or a very low level in this tournament.

* WNBA fan disclaimer: I am more of a professional basketball fan for both men's and women's basketball. Therefore, my watching of the college game centers around the elite teams or teams with prospects who may make a good impact as professionals though I greatly appreciate that college fanbases are often more passionate than their pro counterparts.