Analysis: How St. Joseph's won a thrilling game against Fordham in the Atlantic Ten championship

The numbers on St. Joseph's 47-46 triumph over Fordham at Brooklyn's Barclays Center. For more on the game, check out our Atlantic Ten championship storystream.

Share All sharing options for: Analysis: How St. Joseph's won a thrilling game against Fordham in the Atlantic Ten championship

BROOKLYN, NY - The Atlantic Ten Women's basketball championship gave us a thrilling game that went to the final possession. The numbers and analysis follow...

In terms of exact efficiency, St. Joseph's had the slightest edge. Their calculation was .783, Fordham checked in at .779 which rounded to a 78. In sheer numbers the Hawks had a .004 edge. This game was that close. The pace was just about what you could expect of these teams, and in a game with so much on the line.

St. Joseph's had an advantage on the line. Part of it was the late game fouling the Rams were forced into, trailing down the stretch. Mostly you have to credit the Hawks. They got themselves in positions to draw fouls. Especially tournament MOP Natasha Cloud with a game high seven free throw attempts. Rebounding was very close and both teams cared for the ball. St. Joseph's a little better which can be a difference in a one possession outing. 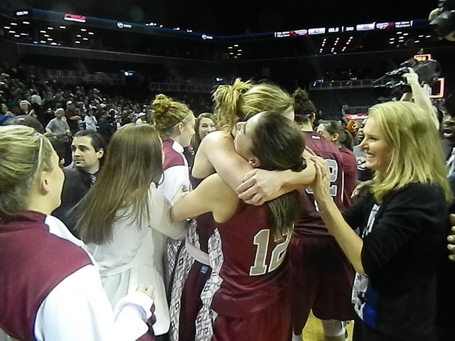 The last time. Fordham defeated St. Joseph's 70-63 in an overtime contest just three weeks ago at Rose Hill. The possessions were 69 for St. Joseph's and 66 for the Rams. Remember, it was an extra five minutes so relatively speaking the pace was close to the championship game. Fordham posted a 106 offensive efficiency to St. Joseph's' 91. Saturday's final, not surprising, was more defensive oriented.

Strickland's efficiency was hampered by 4-for-15 shooting. Cloud also struggled shooting with 6-for-15 from the field and 3-for-7 on the free throw line. Corning turned in a strong effort. The junior guard shot 5-for-8, added 7 rebounds and did not commit a turnover.

Not getting off easy. As an official, I was asked about that final call that ended Fordham's final possession. Taking an officiating cue, I try to look off the ball in games covered as a media member. You can pick up a lot watching off the ball. When the game is late and something of the order of a team looking for a game winning shot like Saturday, the tendency from the media standpoint is to just watch action on the ball...which is what I did and in effect, did not see what transpired away from the ball. I will say, the calling official, Joe Vaszily, in my estimation, is one of the three best women's basket officials in the nation. If he feels it was a foul, fine. He has credibility and trust of coaches and officiating partners.

From a coaching standpoint, it is hard, especially on the Fordham side. But both Cindy Griffin of St. Joseph's and Stephanie Gaitley of Fordham, could look at tape and find several things they would have done different. Yes, the call was crucial in determining the game but not the reason for winning or losing.

Line of the night. Courtesy of women's basketball guru Mel Greenberg: "The morning after Notre Dame won the Big East, white smoke was spotted coming through the chimneys of Greensboro, Noth Carolina."