The Fordham Rams lost a hard-fought game against the St. Joseph's Hawks in the A-10 Championship game at the Barclays Center in Brooklyn, New York. Nevertheless, the team picked 11th in the preseason coaches' poll has plenty to be proud of. For more on the A-10 conference, check out Pickin Splinters.

BROOKLYN, NY - The teams put it on the line for forty minutes and it was not a bit surprising given the stakes at hand.

In the course of that time you have a number of possessions, ebbs, flows and a succession of things transpiring. There is no doubt, though, both teams will remember the call.

As Fordham was in possession, down a point with time running down, Samantha Clark was called for an off the ball foul. There were six seconds remaining. St. Joseph's missed a one and one with three seconds left. Fordham, out of time outs, rebounded and had to settle for a desperation heave beyond half court. St. Joseph's held on for a 47-46 decision and the Atlantic Ten Tournament championship.

"I was shocked (on the call)," said Marah Strickland of Fordham. "I saw nothing wrong with the play."

Ram head coach Stephanie Gaitley dismissed it as a play she would have to review on tape. The Fordham mentor did add that, "At that juncture of the game, let the kids decide. I felt there was aggressive plays not called throughout. Why with seconds left?"

The Rams jumped out to a 7-0 lead after four minutes. The lead extended to a dozen before St. Joseph's got on the boards. Yet the early lead was not something Gaitley thought of as a distinct advantage. As the Fordham mentor pointed out, the Rams led early in their February 24 overtime victory over the Hawks on Rose Hill. St. Joseph's, Gaitley knew, was not going away.

The Fordham defense sloughed off the perimeter a bit and doubled on post entries. By the half the Rams led 24-16 and held the Hawks to a 21% field goal percentage.

In the second half, to no surprise on Gaitley's part, the Hawks found their range. They came out running their offense with a great deal more poise. In fact, the Hawks went on a 12-0 run of their own. That run reversed a Fordham lead and ultimately gave St. Joseph's a four point edge with just under 11 minutes left.

"They can shoot," Gaitley said of St. Joseph's. "The second half, their shots dropped and they did capitalize on a few of our defensive errors."

A three pointer by guard Erin Shields with just under three minutes to go gave the Hawks a lead they would not relinquish. The team shooting barely over 20% in the first half found the mark, hitting 52% (12 of 23) after intermission.

"Wow what a game," exclaimed St. Joseph's head coach Cindy Griffin. "We started out down, but our kids were resilient with a lot of desire. Down the stretch they made the plays."

"It was a combination of everyone laying it on the line," said Hawk forward Ashley Prim. "We were not leaving here with any regrets."

For the Rams, Strickland led all scorers with 16 points while adding seven boards. Junior guard Abigail Corning was effective for the Rams as well. Corning knocked down two treys scoring fifteen points while pulling down seven rebounds. 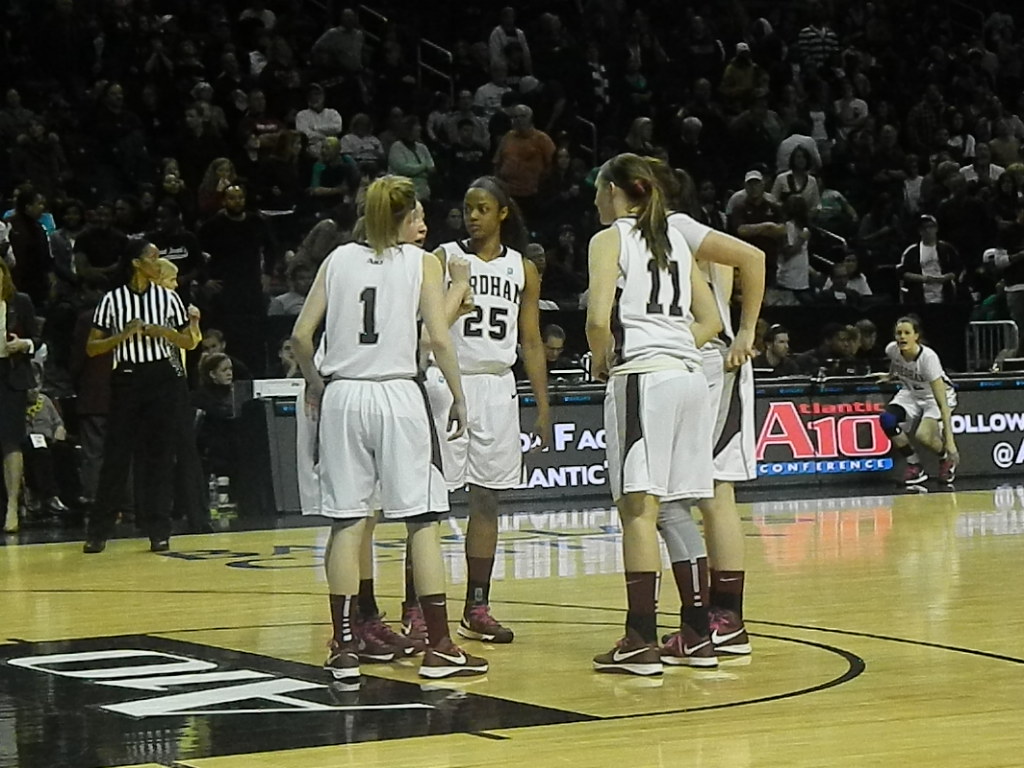 Fordham's Marah Strickland (#25) was emotional after a disappointing loss in the A-10 championship game. Nevertheless, the Rams' season was a successful beginning to a culture change.

For Gaitley, an emotional time to say the least. Not just in coming ever so close to bringing the title to Rose Hill. But the fact she coached at St. Joseph's and was at the helm in 1999 the last year they captured the A-10 crown.

"Four of their coaches on staff played for me," she said. "They are a well coached, well rounded team but it is bittersweet because it is for a championship."

For Strickland an emotional time as well. She broke down in the interview room, obviously disappointed over the loss. Strickland, a graduate student using her final year of eligibility at Fordham was emotional over recalling, "How much my teammates were so special and from day one worked so hard to turn around Fordham basketball."

Gaitley also commented on the game being held in the Barclays Center. A crowd of 4,400 was the largest attendance for an A-10 women's final. The rabid fan bases made it sound like 14,000 were on hand.

"This was a first class event,' she said. "The Barclays Center is a beautiful facility and the hospitality of the Atlantic Ten Conference was just outstanding. Playing the final here made a great statement for Atlantic Ten Women's basketball."