2013 NCAA Tournament: Weighing the cost of a team's weaknesses to select second and third seeds

This past weekend saw a number of teams ranked in the top 10 in the national polls fall in their conference tournaments, either to teams that do their tournament "resumes" no favors or due to dreadfully substandard performances. That left a number of teams with legitimate arguments for two and three seeds in the 2013 NCAA Tournament, which matter not only for which top seed they're paired with but also which region they go to to play their games. While the tournament selection committee will seek to sort things out using RPI, today we'll try to sort things out in terms of which teams best manage their weaknesses.

Share All sharing options for: 2013 NCAA Tournament: Weighing the cost of a team's weaknesses to select second and third seeds

Earlier this season we had a brief discussion about whether being "elite" should be defined relative to the field of competition or by some free-floating universal statistical standard.

I've always felt the former is sort of pointless because someone has to be crowned champion regardless of how they stack up with the all-time elite and the latter reminds me of a rather painful discussion from an undergraduate Western Philosophy class that I'd rather not revisit.

So instead I'm going to strike a sort of middle ground here: I usually define "elite" teams as those that are best able to minimize their weaknesses on a consistent basis. In other words, rather than look at who a team lost to focusing on bad losses, good wins and RPI, I'd rather determine the quality of a team by looking at why they lost games and what that might say about how they manage their weaknesses or common themes in how opponents exploit them. Following that logic, I'd suggest that the teams best at managing their weaknesses will go further in a tournament setting and are thus more deserving of higher seeds.

When I looked over the teams in the conversation for second and third seeds, that's what I began to wonder: based on the evidence in front of us, which of these candidate teams are actually the "best" at managing their weaknesses? Or, more abstractly, if we were to hold a round robin tournament of all the teams in the discussion for a second or third seed, what would the final standings look like?

The latter question was something we discussed with the in our roundtable with SB Nation bloggers earlier this year and we're essentially updating that discussion with conference play in the rear view mirror and supplementing it with a full set of statistics. But a few additional teams have clearly played their way into that discussion based on RPI and other ratings so let's begin there.

More: SB Nation roundtable about Cal, Kentucky, Maryland, Penn State, and Tennessee How do we sort out the teams on the cusp of the elite in NCAA women's basketball? Previewing the 2013 NCAA tournament brackets

A summary of ratings for teams that might have a shot at a two or three seed in the 2013 NCAA Tournament.
Click the links for full lists.

If we accept the statistical "crowd sourcing", that leaves us with seven teams to fill two 2-seeds (with Duke or Stanford taking one and Kentucky the other) and three 3-seeds (with Texas A&M taking one).

So now let's take a closer look at these teams by looking at the offensive and defensive efficiencies.

What stands out among these numbers is that despite Maryland getting somewhat mixed reviews in the previous table's ratings - albeit still worthy of consideration for a 2 or 3 seed - they clearly have the most efficient offense and the biggest efficiency differential of any of this set of teams. So if they've been so good this season, why aren't they rated more highly by the various rating systems?

The answer lies not so much in a critique of the use of basketball statistics as much as the need for a closer look at Maryland's strengths and weaknesses. For that, we'll turn to the Four Factors - or "tempo-free" - statistics.

Four Factors for offense and defense for nine teams in the mix for 2 & 3 seeds.

Here Maryland's offensive efficiency is explained quite well: they have by far the best shooting efficiency differential of any of the teams above, which translates into having the most efficient offense of any of these teams. That shooting efficiency is bolstered by an outstanding offensive rebounding percentage that helps them extend possessions, if not get high percentage second chance scoring opportunities. And if there's anything that bodes well for a NCAA tournament run, it's scoring efficiency - teams that can manufacture points against a variety of opponents that they may not be familiar with have a distinct advantage over one dimensional teams or teams that struggle to score efficiently. 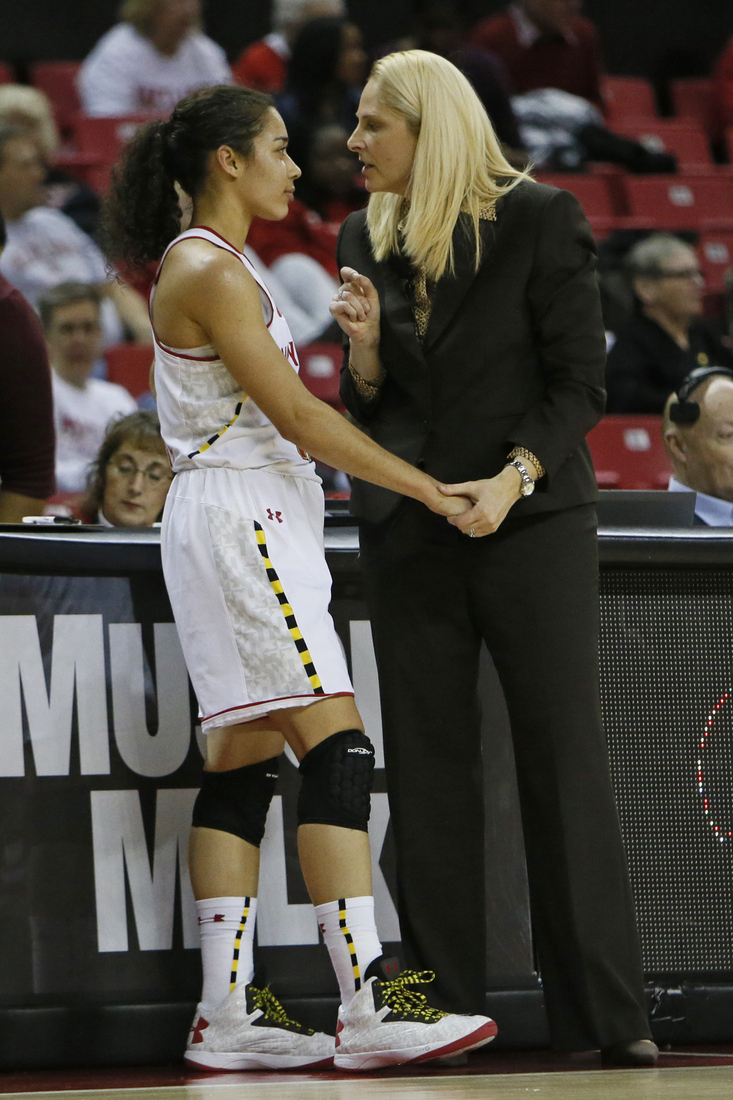 However, Maryland's downfall is their turnover percentage: not only is it the third highest on this list, but they pretty much turn the ball over as often as their opponents. And if you look back at Maryland's losses - particularly the two losses to Duke, first with Blue Devils point guard Chelsea Gray healthy and then without - turnovers are what most frequently short circuit their otherwise efficient offense.

That reflects two truths about Maryland: first, both forward Tianna Hawkins and wing Alyssa Thomas are turnover prone players for their position, which is a problem because Maryland relies heavily on both of them for scoring. Second, the turnover rate reflects their depth issues at point guard: having lost a pair of point guards to injury prior to the season, ball handling and depth has been an issue for Maryland all year.

So what does that mean for Maryland's seed in the NCAA tournament? Let's take stock of their competition.

Ultimately, the toughest part of this seems to be deciding between Penn State, Texas A&M, and Tennessee for that last 2 seed. Depth almost always catches up to teams in the NCAA tournament and with the uncertainty about Tennessee having Isabelle Harrison back that could really hurt the Lady Vols. Penn State's bad losses reveal a pair of weaknesses: in addition to putting teams on the free throw line quite a bit when they face attacking guards (partially explaining losses to Minnesota and Wisconsin), they also struggled to defend the paint in losses (Miami, which scored 44 points in the paint, and Michigan State). Add to that their tendency to drift to the perimeter with Maggie Lucas being their only consistent 3-point shooter and there are a few weaknesses that teams can exploit. Then you have TAMU and teams figuring out how to limit Bone's effectiveness in various ways.

Ultimately, this is what I've come up with as teams that would be able to most consistently win

That leaves Maryland and Nebraska - two teams whose weaknesses caught up to them a bit too often - to fight for positioning among the four seeds and an earlier than hoped for meeting against this season's dominant top seeds.

How do we sort out the teams on the cusp of the elite in NCAA women's basketball?