A collection of thoughts and ideas from recent weeks of officiating girls basketball.

KINNELON, NJ - A travel game from the past Sunday with a few assorted Pink Whistle items of particular note.....

Host Kinnelon raced out to a 29-4 halftime lead and cruised to victory. They simply had too much. A combination of players that could run the floor, shoot, handle and most important, unselfishly look for one another. Montvale simply struggled to get anything done in this contest.

Interestingly enough, the Kinnelon coach Jim Cronin said the day before his club lost their first game of the season.

"As poorly as we played yesterday," Cronin said, "we were great today."

You prepare but just never know how they will respond.

An officiating partner in the Kinnelon game was Lori Vega, who used her pink whistle to match yours truly. Have officiated for her as a coach but this was the first time working with her and it was a pleasure.

Lori used to take a Morris County boys AAU team to Hamilton Park's Summer League in Jersey City. The Hamilton Park circuit has strong teams as national power St. Anthony's, a regional powerhouse in Hudson Catholic and other top notch programs as Snyder, St. Peter's Prep and Don Bosco just to name a few. The idea was to expose the suburban based team to the rigors and demands of a fast paced, man to man defensive style of ball.

Lori played at now closed St. Joe's (West New York) High School and later Bloomfield (NJ) College. She was weaned on the physical style of ball in Hudson County. Doing a lot of work officiating in Hudson, we both had similar philosophy on how to consistently officiate the game.

She no longer coaches the AAU team as they have moved onto college. She is now coaching eighth grade girls. Through it all, she finds time to juggle a schedule of seeing former players play and referee. She enjoys officiating as a great way "to stay close to the game and in the process, run and stay in shape."

She looks fit enough to get out and run the point. For Vega, officiating is more giving back and being involved in the game. A game she has seen as a player and now gets the perspective from the sidelines coaching and on the court as an official.

Final note on coaching boys AAU, Lori said, "I started coaching them when they were 12 years old so I got their respect very fast and I enjoyed working with them."

This is why you play the game. The last week of February saw a quarterfinal game in the Northern Valley Parochial 5-6 girls tournament. Our Lady of Mount Carmel (Tenafly) was visiting St. Joe's (Oradell). I worked their regular season meeting, a 16 point win by Joe's at OLMC. Tonight the visitors from Tenafly prevailed 25-22. St. Joe's never got their rhythm while OLMC took the coach's primary emphasis on the grease board 'leave it all out there on the floor'. Thought St. Joe's could be a championship contender, instead they were 'one and done'. As their coach said, "they (OLMC) just wanted it more tonight."

Coaching, they say is basically the same whether you are leading a boys team or girls team. Technically it is the same but the coaches who I meet that have coached both, discuss the inherent differences. One universal comment I receive is the girls are more receptive and willing to be coached.

Frank Muggeo coaches the freshmen boys at Bergen Catholic High School in Oradell, New Jersey. Bergen is a strong program and the freshmen naturally are a talented group. Muggeo also coaches his daughter's eighth grade travel team in Rive Vale, NJ. They are in a lower travel league and many of the players are still learning. Muggeo commented after a recent win how, "the girls are more open to coaching and do not profess to know it all like a lot of boys players." Muggeo was not necessarily speaking of his group at Bergen as he has experience coaching AAU. 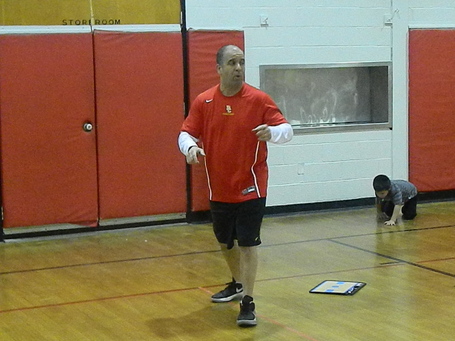 Frank Muggeo explaining a concept to his River Vale girls during halftime.

Having officiated for him at Bergen and the River Dale girls it is interesting to see his approach. The girls, given their level, run less sets. They change defenses but nothing is done to overburden them. He does run some nice out of bounds sets with the girls. Taking cue from Michigan State coach Tom Izzo who says, "Special situations are like special teams in football. Control them you have a better chance to win." Muggeo looks to not just get the ball in on and out of bounds but attack and score.

The levels he handles with the boys and girls are markedly different in experience and talent. In coaching some things just do stay the same.

"Yes," she said. "He's a cousin but we have Adubatos all over who are related."

We discussed his coaching and traded a few WNBA anecdotes. One of the things coaching eight and seventh grade girls is their lack of general knowledge of who plays where.

"I asked my team to name some college players," she said. "The only answer anyone could give me was Britney Griner. That is one player. They don't even know the local kids who are playing in college."

She is a good coach to work (officiate) for. Fair, she is tough with her kids about playing hard and realizing the game is physical. The perfume can wait.

"I tell them on prom night dress well and be a glamorous lady," she said. "But when you step on the floor be ready to sweat, hustle and hit the floor for loose balls. A lot of kids want to play at the high school level. Fine, but they must realize how much more demanding that is as compared to grade school travel."

Something tells me, if he heard these thoughts, Richie Adubato would have loved it.