The Saint Bonaventure Bonnies: What a difference a year makes

An overview of a sharp change in fortunes for the St. Bonaventure Bonnies and what a difference a year makes after their loss to Fordham on Wednesday.

Share All sharing options for: The Saint Bonaventure Bonnies: What a difference a year makes

BRONX, NY - A year ago they had answers.

Opposition runs were stopped. The defense rose to the occasion. The offense provided the crucial scores at crunch time. There were close games but they were handled.

A year ago the St. Bonaventure women's basketball team was going through the Atlantic 10 like a hot knife through butter. The lone loss, a three point setback in the championship game to the Dayton Flyers.

It was a magical season for St. Bonaventure culminating with a run to the NCAA Sweet Sixteen. The team were literally celebrities in the Olean, NY area. Coach Jim Crowley and his program received national exposure. It was a special time for all, students, fans and alums.

This season is so different. 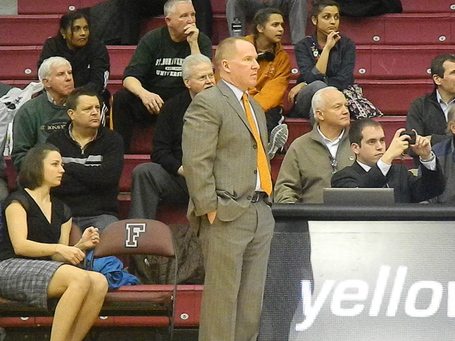 Th 62-50 loss to the Fordham Rams on Wednesday dropped the Bonnies to 2-11 in conference play. Saturday's game at home against LaSalle will quietly end the season. They were mathematically eliminated from being one of the 12 conference teams headed to the Atlantic Ten post season tournament.

Coach Jim Crowley was well aware his group would be tested this season. The Bonnies, who finished in the NCAA Sweet Sixteen a year ago, were without the services of sharpshooting Jessica Jenkins and an excellent post player in Megan Van Tatenhove. Another starter Armelia Horton, at the guard spot, was third starter lost to graduation. Sure there was talent and experience returning but everything needed to fall into place for this group.

Things simply did not work out.

"Everything flipped," Crowley said after the loss at Rose Hill. "We lost our main perimeter threat for the year and there were other issues."

A season ending injury to Chelsea Bowker was the injury Crowley alluded to. Bowker, a senior forward, was counted on by Crowley to be a primary scorer. She is eligible to come back next season.

The other 'issues' were not off court or chemistry related. Specifically, a few bumps and bruises and losing senior guard Alaina Walker for a few games to mono. A number of Atlantic 10 games came down to the final minutes. Unlike last year, the Bonnies simply did not have answers. Injuries are part of the game but they will do that to you.

Against Fordham, the Bonnies rallied from 16 down in the first half. The Rams buried nine three pointers in that opening half.

"We got some close outs and defended a lot better the second half," Crowley said.

Despite getting within one possession, the Bonnies could never gain the second half lead. If they did the outcome could have changed.

"If we got the lead, who knows," Crowley said. "They (Fordham) were in foul trouble and trailing they might have been a little more tentative."

In the stretch the Bonnies missed some easy shots and struggled from the free throw line as the Rams pulled away for the victory.

Gaitley, despite having a big early lead, was not a bit surprised the Bonnies were resilient and battled back. She pointed out this was a role reversal from last year. In late February the Bonnies were undefeated in A-10 play. Fordham was struggling but battled before being turned back at Reilly Center. A difference a year makes.

"We had great success last year," Crowley said. "You just can't be satisfied. All of us, coaches and players, realize there are things you have to do on a daily basis and you just can't be content."

The lineup has veterans such as junior forward Doris Ortega and CeCe Dixon and Alaina Walker at guards. All three were instrumental contributors a year ago. Ortgega leads the team in scoring at 11.9 points per game. The junior forward out of New York City, paced the Bonnies with 13 points and hopes to compete for the Puerto Rican Women's team this Summer. 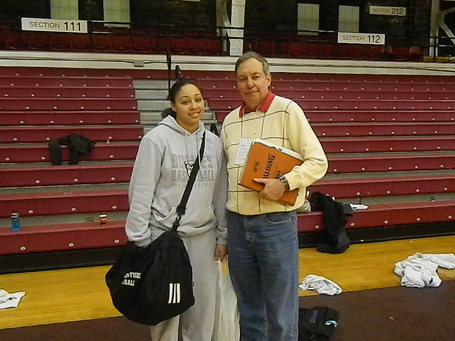 The author, a Bonaventure alum, had a chance to meet and talk basketball with Doris Ortega.

There are two freshmen in the starting lineup. Katie Healy, a 6-1 freshman listed as a forward but more of a post for the Bonnies. Emily Michael, is the other first year player starting at guard.

"Our freshmen have had moments but they are learning," Crowley said, "and prone to the mistakes young players make."

The fans at Olean understand the situation and have been understanding given the lofty heights achieved a year ago.

"Our fans know we are young and our personnel has changed," Crowley said. "We know what we (as a staff) are trying to accomplish. There is a certain way we want to play what we want to do and how to go about it. Repetition is very important in what we do."

Repetition and investment are terms Crowley frequently uses. Repeating what you want to do whether it is a drill or running an offense in practice . Investment, as a long time commitment to achieve excellence.

Crowley did note last year had an impact on his recruiting.

"We are still looking for a certain player to fill a role for us," he said. "Let's say the year we had brought our program some national attention. More prospective players know about us and are willing to listen."

Upbeat and not wavering on his philosophy Crowley notes this year has been tough but promises, "we will be back on track soon." 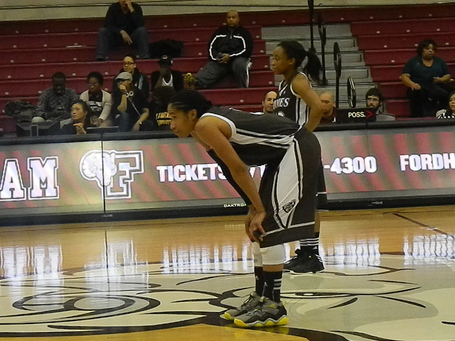 Alaina Walker, catches a breather during a free throw.

The loss on Wednesday dropped the Bonnies to 9-19 overall. The last win was January 23 against Rhode Island. The losing streak is now at nine games. Crowley still maintains optimism and can't wait to get back and prepare for LaSalle.

Crowley's last statement was said half jokingly. Deep inside he realizes as tough as the season has been there is another opportunity to compete. One more chance to put those ideas of 'repetition and investment' into play.