Continuing our look at 2014 WNBA Draft prospects, today we focus on some forwards and centers who probably warrant attention based on their junior season performance even if figuring out exactly how their statistics translate might be difficult.

There may be no better summarize Hallie Christofferson's value as a draft prospect than what Rob Gray of The Gazzette reported after Iowa State's 83-55 blowout of Northern Iowa last night.

Christofferson scored the first seven points during the surge.

"She’s phenomenal; she’s an all-American," Panthers coach Tanya Warren said of Christofferson. "You can’t defend her, let’s just be honest. And what makes Iowa State so tough is they can score from all five positions. … They’re as efficient as I’ve seen in a long, long time."

Christofferson scored the first seven points during the surge.

"She's phenomenal; she's an all-American," Panthers coach Tanya Warren said of Christofferson. "You can't defend her, let's just be honest. And what makes Iowa State so tough is they can score from all five positions. ... They're as efficient as I've seen in a long, long time."

Christofferson scored 22 points in just 22 minutes - which she was limited to due to foul trouble - while also finding the time for 5 assists and 5 rebounds. And, though she doesn't get much fanfare outside of Ames, Christofferson is a nightmare to defend for even the nation's best teams.

She's among the nation's most versatile players, with the agility and skills of a small forward. However, it's not her versatility that's most impressive - it's that she operates so efficiently on the floor. With the ability to take advantage of so many different matchups, she can put up points in a hurry and it has been hard to ignore thus far in her senior season: she's currently ranked 13th in the nation in points per game (23.9) and seventh on a per minute basis, according to WBB State. That she can do all of that while also maintaining a true shooting percentage of 69.5% (29th in the nation) is quite remarkable.

Yet Warren's point about the team's efficiency is also worth pointing out in terms of figuring out what type of WNBA draft prospect Christofferson might be.

It is indeed true that Iowa State is extremely efficient: they're currently ranked fourth in the nation in offensive points per possession according to WBB State, albeit against a weak schedule, and Christofferson's versatility is obviously a major part of that. Of course, the flip-side of that is to wonder whether having an array of options on the floor around her is in fact inflating her statistics: is it possible that Christofferson is as much a beneficiary as a driving force of Iowa State's offensive efficiency?

This is something that's always difficult to tease out by looking solely at numbers - and Iowa State simply isn't televised all that often - but looking at Christofferson's junior season might help to add some context to the story.

So we'll begin with Christofferson in looking at some of the forwards and centers we'll be watching as 2014 WNBA Draft prospects.

Setting aside her WNBA potential, it was somewhat surprising that Christofferson's junior season didn't get a bit more attention: she was an extremely efficient scorer on a tournament team that she was arguably the MVP for despite playing with two 2012 WNBA draft picks and continuing an adjustment to the small forward position.

But if there's anything we've learned from the past few seasons, it's that hyper efficiency isn't everything and that might help to temper enthusiasm about her numbers.

The first thing that stands out about Christofferson's junior season was that she was about an average usage player (21.54%) while WNBA draft picks Chelsea Poppens (24.40%) and Anna Prins (26.22%) were the focal points. The second thing that stands out is a low steal percentage and offensive rebound percentage (for her size), which is often a harbinger for athletic struggles.

The question entering the season as a 6'4" player who hasn't been a dominant rebounder is what role she would fill on a WNBA roster. Her 40% 3-point percentage makes her a clear candidate for a stretch four at the very least. The fact that she is now in the top 30 in the nation in scoring efficiency at a higher usage rate (31.41%) is extremely impressive. The question now is how much of that elite scoring ability she can maintain not only looking ahead to a transition to the WNBA but also during the upcoming Big 12 season when she'll be playing tougher competition that is more familiar with her game.

For now though, she's clearly a player worth keeping an eye on.

It's way too early to talk about how good a first pick Chiney Ogwumike might be historically, but the only real question about her is whether it's even possible to imagine someone else going first in 2014.

The one obvious knock on her game might be her still-developing perimeter game, which she has been working on. But you know she's going to be an effective rebounder and scorer right away in the WNBA with numbers like that. Defensively, she's proficient all over the court with her length able to bother any player and her quickness helping her stay in front of even the most elite athletes in the NCAA.

The fact is that an athletic 6'4" player who's that efficient would haunt any general manager who dares to pass on her. Chelsea Gray and Odyssey Sims do have the chance to be outstanding point guards and Alyssa Thomas could be a solid wing, but Ogwumike's combination of athleticism, height, and length is so rare that someone else would have to have an almost historically spectacular season to make a strong case for going ahead of her.

Alyssa Thomas was unquestionably the best player on a team that featured a first round pick last season and was picked to repeat as ACC Player of the Year in the preseason polls.

She's a versatile player, the accolades and wins speak for themselves, and most people justifiably believe she'll be a lottery pick.

But it's worth noting that her junior season statistics were not all that spectacular compared to past prospects. Although her offensive rebounding and free throw rate numbers speak to her athleticism, she only made six threes all year to complement that borderline 2-point percentage and has struggled with turnovers on occasion as the negative PPR suggests (14.79% turnover rate).

So far this season, she's improved on that scoring efficiency but the turnovers continue to be a problem: she has 18 assists to 20 turnovers thus far this season. It's always hard to tell how much those turnovers matter - not to mention, what type of turnovers matter and how much - and that goes double for high usage players whose turnovers can be a product of having to handle the ball so often. But it's also sometimes hard to tell how much "versatility" matters: there are plenty of players in the WNBA who have stayed on rosters due to one elite skill.

Nevertheless, what makes Thomas attractive as a prospect is that she seems to be the type of player that will find a way to impact games based on her college performance. 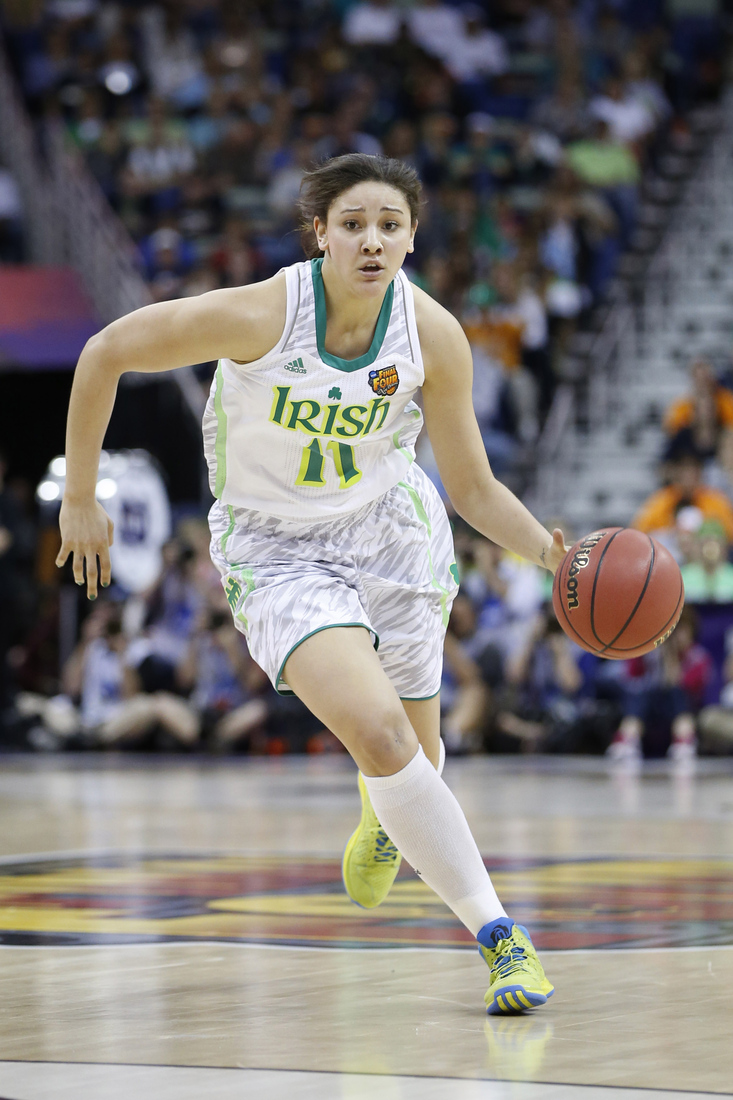 In a guest post for Swish Appeal, Aneela Khan reports that both Natalie Achonwa and teammate Kayla McBride looked ready for the WNBA.

It's probably clear what Achonwa has going for her: she's a solid scorer and a strong rebounder who eats up space in the paint. A lot of that efficiency last season was due to a strong free throw rate (FTM/FGA) of 47.88% while making 80%.

The one concern strictly from looking at the numbers might be how she adjusts to the speed of the WNBA game: blocks and steals aren't necessarily great indicators for posts, but her block percentage of 2.2% and steal percentage of 2.32% speak to a center with average athleticism. That ratio of blocks and steals to personal fouls (1.01) is a bit of a red flag for a center who will struggle to make their presence felt athletically.

We really can't read much into her four games thus far this season - as reported by Vicky Jacobsen of The Observer after yesterday's win over Penn State, she's still not really at 100% after returning from a knee scope. But she has looked like no less an outstanding position rebounder, which could help her find a place on a roster looking to fill a hole on the interior.

The junior season statistical profile probably doesn't give Stefanie Dolson justice: if it wasn't clear last season, it should be clear now that she has a role in the WNBA as a high post center who will do all the little things on both ends of the floor.

Even the very low free throw rate probably reflects her strength: she plays the high post for UConn so often that a lack of free throw attempts is understandable. She has a chance to be one of the most efficient passing centers to enter the league in the last few years and the fact that she can be so efficient as a scorer overall - even without the aid of a ton of free throws - bodes well for her WNBA potential.

Any concern you could come up with about Dolson is at the very least mitigated by her strengths: she might not project as an All-Star, but she'll have a role in the league on any team that has a scoring power forward to pair with her. We're still a long way away from figuring out how things will shake out in terms of where Dolson rates relative to other prospects, but she'll probably be among the safest picks in the draft in that whoever selects her will pretty much know what they're getting.

For more on 2014 draft prospects throughout the season, stay tuned to our 2014 WNBA Draft prospects storystream. To find the watch list itself, go to the "Library" drop down menu on the top bar of the page.