Aneela Khan of the Silver Stars News & Notes blog covered the Notre Dame Fighting Irish's 100-61 win over the Duquesne Dukes for Swish Appeal, with a focus on the return of Natalie Achonwa to her home province in her NCAA uniform.

Toronto has always supported the NBA's Raptors even throughout their tumultuous years as a franchise. They've even started to support all the upcoming men's NCAA talent that is coming through to the pros and are more basketball savvy than, say, five years ago.

So when Notre Dame announced their schedule with a game in Toronto this past summer, it got me into thinking who would show up to the game besides friends, family and some media members. The result was that the Mattamy Athletic Centre - formerly known as the Maple Leaf Gardens - sold out the game. It was a nice and pleasant surprise to see so many fans who came out to support women's college basketball.

While Notre Dame's opponent the Duquesne Dukes had four Canadian NCAA players on the team (Wumi Agunbiade, Oditte Odisho, Jose-Ann Johnson and Brianna Thomas) there was no denying who the majority of the crowd came for: Natalie Achonwa.

A lot of Fighting Irish fans as well as people of Achonwa's hometown of Guelph, Ontario came out to the game. Coach Muffet McCraw said post game that, "Playing in a game internationally was great. The crowd, the atmosphere as well as playing both the national anthems was an emotional moment. It really was a great thing."

Achonwa also noted the fact that she probably knew more than half of the people who came to the game. 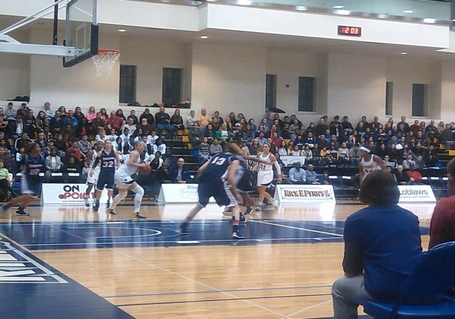 The game was set in a way that made it essentially a home game for the Fighting Irish as they wore white and the Dukes wore their road blue. When the game started, Notre Dame played with intensity and was able to make it a blowout in the early part of the first half.

Kayla McBride, who is one of the top WNBA draft prospects, came to play. She led the team in scoring with 22 points and she did it effortlessly. She was able to pass, shoot and score in a variety of different ways and seeing her live confirmed in my opinion that she is WNBA-ready. In the second half, the Dusquene Dukes played looser and more freely, but Notre Dame already had a substantial lead in which they won by a score of 100 to 61.

After the game, tons of family and friends stayed behind waiting and talking to the players of both team while waiting to say a final goodbye to Natalie Achonwa who was headed back to Indiana. Coach Muffet McGraw was asked after the game how proud she was of her seniors and their future and didn't hold back on the praise.

"I think both (Kayla McBride) and (Natalie Achonwa) are ready for the league," McGraw said. "They both have a great future. This a tremendous class and this is one of the best, if the best Notre Dame Women's Basketball history. They've been to 3 Final Fours. No other team has done that." 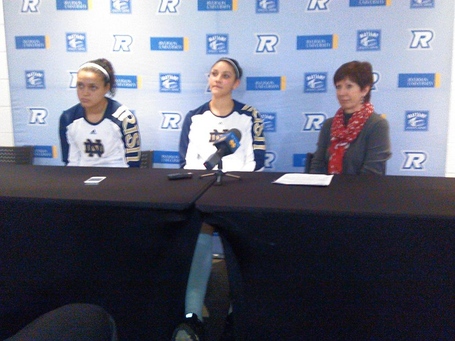 Achonwa was also ecstatic to see a lot of young Canadian girls at the game.

"It made me really happy because when I was going through the recruiting process, I never got the chance to see a Canadian player who was successful in the NCAA's and now they get the opportunity to see it," Achonwa said. "I tell people all the time that Canada has great talent coming and is improving and can play high calibre basketball."

Natalie Achonwa's homecoming was a homerun and more schools who have Canadians should try to host a game in Canada. And if Toronto can support women's college basketball, then why can't they support a women's professional team? Maybe Toronto is ready for a WNBA team. They just don't know it yet.

Notre Dame's next game is tonight at 7:30 p.m. ET on the Big Ten Network against Penn State as part of the Big Ten/ACC Challenge.