With the WNBA announcing the date of the draft lottery yesterday, we look at 10 NCAA DI players to watch during the 2013-14 women's college basketball season.

I've said over and over again that junior season statistics don't mean a whole lot in evaluating WNBA prospects and UConn's Bria Hartley might be the embodiment of why that.

What has been well-documented about Hartley's junior year is that her early-season ankle injury bothered her for most, if not all, of the season - even after partially healing physically, coach Geno Auriemma has discussed the lingering mental effects that led to her having a poor season statistically. But on top of that, Hartley was playing more of a combo guard with UConn turning to more of a point guard by committee approach with Hartley eventually coming off the bench for the tournament run.

That means Hartley's junior statistics were all over the place, seemingly leaving her without a clear WNBA role.

Despite all of those ups and downs, Hartley still rated as a solid prospect with a 2-point percentage of about 48%. Yet at 5'8" and a style of play - based on her ratio of scoring to perimeter to interior orientation - that was most similar to past point guard prospects, the inefficient ball handling that Carl Adamec of the Journal Inquirer figured to be a problem: on paper, Hartley's junior season statistics suggested that she'd be a scorer in a point guard's body which can usually also be described as "mediocre point guard prospect".

But if the beginning of her senior season is any indication, Hartley could very well be much more than that - the combination of an established role next to Moriah Jefferson and a healthy ankle has obviously paid dividends.

Entering Sunday's nationally televised game against Ohio State, Hartley had a 2-point percentage of 59% - more than a 10% jump over last season and clearly among the best among elite wing prospects in the 2014 WNBA draft class. As for the ball handling that Adamec explored, she currently has a pure point rating 8.39 which is outstanding even for an elite point guard prospect - regardless of whether she's the full-time point guard or a shooting guard, distributing the ball that efficiently is extremely impressive.

Some might say that Hartley hasn't really made a leap as much as just gotten back on track after hitting a speed bump last season. But looking solely at the numbers, Hartley has made an important leap in WNBA draft terms: from a suspect combo guard to a basketball player who figures to be able to make some kind of contribution at the next level.

I begin this "watch list" with a look at Hartley because she was one of the hardest prospects on this list to "figure out" after the way she played last season - the harsh reality is that the WNBA's current 11-player rosters aren't forgiving enough to assume a player will automatically make a roster based on pedigree. But all those challenges she had during her junior season leave us with questions for her senior season, which frame the purpose of a "watch list".

It doesn't really matter what league you look at: in most years, the top 10 prospects for any draft are going to change over the course of a season, even if the top three remains the same from start to finish. In the WNBA in particular, we know that players can't just leave when their stock is high or the moment they show upside, meaning scouts get the added benefit of watching a player for four years - from a prospect with upside to a finished (college) product.

So this "watch list" is the set of players who showed something statistically in their junior season that put them on pace to possibly make a WNBA roster after they leave the collegiate ranks if they stay on pace or improve. It is not, therefore, a current ranking or a top 10 based on senior year performance. But I have broken it up by position to make it a bit easier to follow.

Regardless of whether Hartley is actually playing point guard for UConn right now is sort of irrelevant. Saying that it would help Hartley-the-WNBA-prospect to demonstrate the capacity to handle the ball efficiently at the next level as a 5'8" guard shouldn't even be controversial - it's like saying any player would be a better pro if they got better at playing basketball. And before dismissing Hartley's early-season efficiency this season as a product of beating up on teams that couldn't stay with Uconn, bear in mind that a) the Huskies always beat up on opponents and b) she's never been anywhere close to this efficient in non-conference play before.

All the talk about Hartley turning a corner is real and, really, if you look at her junior season numbers there are many past scoring prospects who would even be envious of those numbers. The fact that she's more efficient across the board this season just makes her an even better prospect.

It's hard to read too much into Gray's numbers right now: her junior year ACC season was cut short by an injury and so far this season she has clearly been playing at less than 100%. But take a look at those offensive rebounding, steal, and free throw rate numbers: Gray is an elite athlete and that type of quantifiable athleticism is almost unheard of for a point guard prospect. The real question for Gray might come down to how well she recovers over the course of the season and how WNBA team medical staffs evaluate her risk for future injury/recovery.

But setting all of that aside, Gray was just a few rebounds and an assist over a three-game span from recording three consecutive triple-doubles. That's remarkable for a point guard playing with a visible limp, even if you were to go through and question strength of competition.

A star in her own right 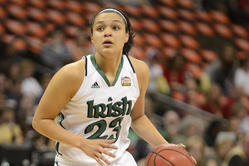 Kayla McBride might have been overshadowed by the hype surrounding Skylar Diggins last season, but she still established herself as a solid WNBA prospect.

McBride has the efficiency and size to make the transition to a scorer's role in the WNBA. The major concern might be the below average free throw rate – which reflects the fact that she has a well-developed mid-range game – but the fact that she operates within the arc and showed the ability to get her own shot (a usage rate of 26.66%).

The fact that Notre Dame's other recent WNBA prospects have had a shaky transition to the pros is somewhat mitigated by the fact that McBride fits squarely into the mold of successful wing prospects in the past whereas each of the other players – including the highly-touted Skylar Diggins – did have something in their statistical profile that did suggest they might struggle despite the lofty praise.

Although Shoni Schimmel has earned a reputation as a 3-point shooter, that's hardly what makes her an attractive draft prospect - a pair of offensive rebounds against Kentucky on Sunday speak volumes about what makes her attractive as a player.

With 6:03 left, she missed a short jumper in the lane after getting by her defender off the dribble, grabbed the offensive rebound, and reset the offense before teammate Antonita Slaughter drew an offensive foul. On the next possession, she zipped a cross court pass off the dribble to sister Jude for a wide open 3-point attempt that missed. And two minutes after that first offensive rebound, Schimmel passed up a contested 3-pointer, drove and pulled up for a leaning jumper from the left block, again got her own offensive rebound, pulled it out, and this time found Tia Gibbs on the right wing for an open 3-pointer that she made to put the Cardinals up 13.

Schimmel is a playmaker in the very literal sense that she just seems to find ways to make things happen and often with a flair for the spectacular. But even when she's not doing anything especially eye-popping, she's able to set up teammates; she's a high risk player who also makes her fair share of turnovers, but she also has vision and confidence that many of the nation's top point guards simply lack.

It's tempting to say that Schimmel's strength as a prospect has nothing to do with stats, but that's not actually true: the fact that a player with a shot selection like Schimmel's had a 2-point percentage of 47.54% with a team-high usage rate of 26.18% is extremely impressive. Last year, 58.78% of her field goal attempts were from beyond the 3-point arc – which is a lot, especially for a player with a free throw rate of just 14.54% – but you have to consider the fact that a number of those attempts are shots she created off the dribble; there aren't many players in college right now even capable of imagining creating the shots she takes.

It's difficult to see how effective she'll be as a WNBA player, but you have to figure she won't be asked to shoot nearly as often which could make her a more efficient scorer who's also capable of creating things in the flow of the offense.

Based on junior season statistics, Sims was by far the best pro point guard prospect. Perhaps part of that was due to Chelsea Gray's injury and part due to playing with easily among the most dominant players in women's college basketball history, but her numbers were absolutely outstanding across the board. Of the point guards among players on the 2013-14 Naismith watch list, Sims had the highest pure point rating and it really wasn't all that close.

What makes that junior season performance particularly important for her is that she has to be more of a scorer this season with Brittney Griner and that talented senior class having graduated – the test for Sims entering this season was not only whether she could maintain that type of pace but also whether she could remain efficient with an increased offensive load.

So far, the answer is a resounding yes, albeit against an early game schedule with no opponent in the top 140 RPI rankings. Her usage rate is at 33.20% - a 14% increase over last season – and she's still carrying a true shooting percentage of 65.5%. And having the ball in her hands even more often hasn't hurt her efficiency as a ball handler either: her pure point rating is currently at 8.99.

Of course, it will be interesting to see what Sims does against the rigors of a Big 12 conference schedule. But right now, she has probably put herself in good position to be a lottery pick come April.

For more on 2014 draft prospects throughout the season, stay tuned to our 2014 WNBA Draft prospects storystream. To find the watch list itself, go to the "Library" drop down menu on the top bar of the page.