Introducing you to the other five brands within Vox Media

On another day where there isn't much going on, that can make this place really quiet. So that gives me a little time to introduce you to the rest of the brands within the Vox Media family, besides SB Nation.

Share All sharing options for: Introducing you to the other five brands within Vox Media

While SB Nation is the biggest brand within Vox Media, and is the best sports blog community out there, Vox Media is more than just sports, and some of the other brands may cover other areas that you're interested in.

So without further or do, here are the other five brands that are part of the company.

Two of the brands' sites are already fully integrated with SB Nation and operate on the same technical platforms. For you as a user, that means that your SB Nation user account can also be used to access the next first two brands I will talk about: The Verge and Polygon.

The Verge is a technology news site. Here you can see news on major technology trends, as well as consumer device reviews. There also is a section on culture and how that intersects with technology. Here's a snapshot below where you can see the layout, which doesn't look terribly dissimilar from SB Nation's: 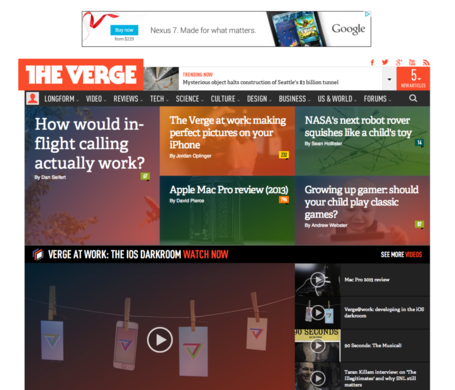 Unlike SB Nation's community sites like this one, you can't write FanPosts or FanShots on The Verge. Instead, there are traditional forums (or message boards) where you can write on a topic and get responses that way.

That said, like SB Nation, you can comment and rec others' comments. In fact the format for commenting is identical, just different fonts. Here's Senior Review Editor David Pierce with his take on the new Mac Pro and a snapshot of commenting on that page: 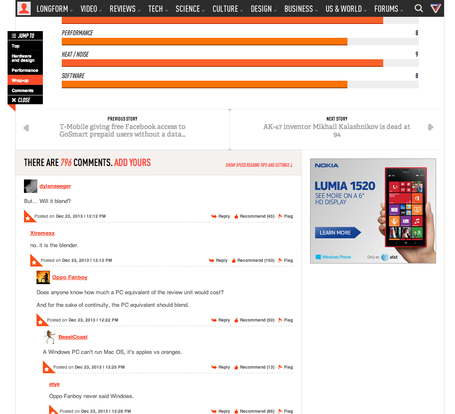 Polygon is a video game news and reviews site where you can read stories on the world of video games, consoles, and their features.  There are also a lot of videos for you to see.   After all, with video games, you have to have videos in order to show the functionality and the feature of them. Here's a snapshot of the site below: 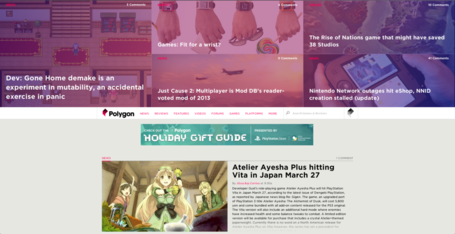 You can see the SB Nation-inspired roots here as well, though it's a video game site. Like The Verge, there are forums where non-contributors can start threads and spawn more discussion, and these threads have more comments than the stories do.

In November, Vox Media acquired The Curbed Network under its portfolio of digital content networks. The Curbed acquisition was worth between $20 to $30 million.

Considering that the company received $34 million of venture capital funding in October, it's not surprising that at least some of this money was used for Curbed. Here's an interview with Curbed founder Lockhart Steele on Digiday on his take on the acquisition.

Since Curbed just joined the Vox Media family, you can't use your SB Nation account to comment on posts, or at least that's what happened with me. I'd imagine that it will be fully integrated soon though.

So now let's take a look at what the brands within The Curbed Network provide.

Curbed is a real estate, interior decor, and neighborhood focused blog network. Many of the sites focus on celebrity real estate, and here's today's story on rock singer Sheryl Crow's Tennessee ranch, which is being listed at a price of $3.85 million. It was listed for $7.5 million back in March 2010. A snapshot of that story is below: 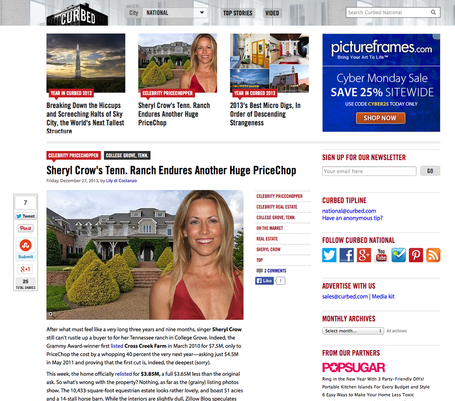 And when I'm talking about neighborhoods, I mean it. There are a number of regional based Curbed sites which include ones for New York, Washington, Atlanta, Chicago, and Toronto just to name a few. For the Curbed DC site, here's one page in a series for their Curbed Cup 2013 where community members will vote on which DC neighborhood "beats" another.

Eater's concept is very similar to Curbed, but as the name implies, it's focused on restaurants, instead of just real estate news and rental tips. On Eater, you can see dining and drinking reviews, so you'll know where to head out next time you're out and about in the night. Here's a story in regards to 19 notable restaurant closings this past year, along with a snapshot below: 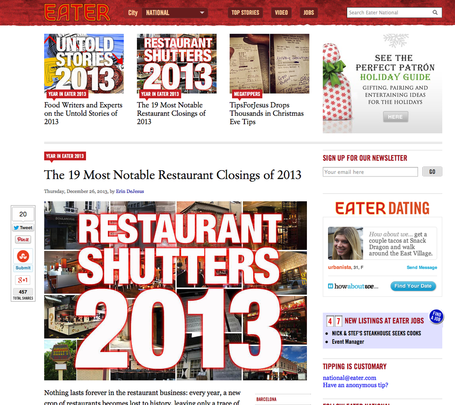 Again, like Curbed, there are neighborhood sites, which include many large markets, including my hometown area of Washington, DC. And if you do head to the nation's capital one of these days, check out this list of which restaurants are the places to go in town right now, which Eater DC's contributors have called the "Eater Heatmap." There also are Heatmaps for the other major regional sites which are located on the right hand side of the national page.

Racked is a retail and shopping blogging network. While the word retail can mean selling almost anything in a shopping mall, a large proportion of the stories on Racked lean towards women's apparel from looking here. Here's a story on 50 New Years Eve Dresses that can be bought for under $150, and a snapshot is below: 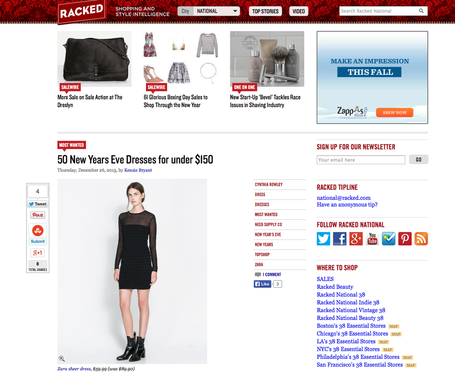 Like both Curbed and Eater, Racked has regional focused sites for major cities. And I'm going to use Washington, DC as an example once again. Here's a link to a story on where some of the District's fashion writers and business people really liked shopping at this past year.

It's easy for us to get tied up in our own little bubble on this site, and all the other sites within SB Nation, but at the same time, one of the blogs in our network, Athletics Nation was the site that helped spawn what's now Vox Media.

We encourage you to take a look around the non-SB Nation sites within Vox Media which hit a wide variety of topics, all of which are really good in their respective areas and interests.