The Houston Cougars have had trouble scoring points this season, among other things.

Share All sharing options for: University of Houston Cougars struggling to score

For their 3-6 record, the Houston Cougars have really not been THAT bad this season. They are averaging 59.7 points a game, just a point lower than what they're giving up on average. Houston's true shooting percentage is 44 percent and they are allowing a TS percent of 45. The Cougars are only being out rebounded by 2.8 boards a game. It's close!

Houston's scoring numbers benefit from a blowout of Prairie View A&M (74-46). Adding 28 points to your score differential this early in the season impacts the averages more than it would in February. For what it is worth, though, the Cougars haven't been blown out this season, not even against No. 24 Texas A&M. The Aggies outscored Houston by 12 points, the Cougars' largest margin of defeat this season.

The Cougar's three wins have come by a combined margin of 43 points - only their win against North Texas could be described as close (66-51). They have certainly suffered their share of close losses, though; even when the scoreboard suggests otherwise. They lost their first home game of the year, to Mississippi State, by eight points, but they were in it until the final minutes.

I talked about Marche' Amerson's inefficient shooting in my last post, and while it's unfair to pin this team's problems on her, having the player shooting 35 percent take most of your shots... well, it's suboptimal. 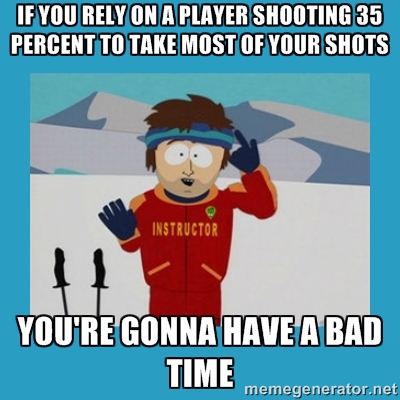 Right. The top three volume shooters on this team are shooting, wait for it, 29(!) percent from the field. Shoot, I should have made the meme about that instead; that's going to hurt my effective joke percentage.

Horse: Beaten. The Cougars don't have great shooters, and as long as possessions end with Amerson 19 percent of the time, their efficiency will suffer.

Alexia Sanders, a true freshman out of The Woodlands, TX (a city called THE Woodlands, I love it) is shooting 43 percent this season. The sample size is small (28 shots), but she has made two of her three 3-point attempts and 11 of her 13 tries at the free throw line. She appears to be a competent shooter and head coach Todd Buchanan has rewarded her with nearly 12 minutes of game time a night. Relying on a true freshman to be, well, reliable, is dicey business, but the Cougars might not have much of a choice.

Weekly reminder that Te'onna Campbell is leading the team in scoring despite taking HALF as many shots as Amerson. It's an apples and orange comparison (Campbell is getting her points from inside), but sheesh.

After winning 13 games in 2012, the Cougars are on pace to win 10 games in 2013. They have two more non-conference games before they begin conference play on Dec. 28 against UCF. I don't know what the Cougars' internal goal is for this season, but I imagine getting above .500 is pretty close to it.

Their next opponent, Texas State, is 1-6 this year, but against much stronger competition than what the Cougars have been up against. Their losses include games against the University of Texas, UTEP and Houston's "crosstown rival," Rice. The Cougars will play against Rice (at Rice) on 12/20 for their final conference game.

Houston takes on the Bobcats of Texas State in San Marcos on Sunday.