San Francisco's poor defense against Long Beach State was exacerbated by the new NCAA rules that limit contact and ultimately undermined their chances at winning their home opener yesterday.

It's normal for University of San Francisco coach Jennifer Azzi, ever the competitor, to make herself scarce after enduring a loss at home.

But after the Dons' 85-82 double overtime loss to the Long Beach State 49ers yesterday (box score), there really wasn't much more for her to say than what she provided for the recap on the program's website.

"It's very hard to win if you turn the ball over 28 times, and they were, in my mind, unforced turnovers," head coach Jennifer Azzi said after the heartbreaker. "That's something that we absolutely have to fix and, we had talked about it at halftime of the game. And then we can't give up 20 offensive rebounds, that killed us as well. I just think we let them take us out of our game."

The Dons coughed turned the ball over 27 times in regulation, which led to 27 points for the 49ers. And that could've been even worse had so many of those Dons turnovers not been passes thrown out of bounds and Long Beach State not missed a number of shots within five feet that contributed to their 28.2% shooting from the field during regulation.

So that the Dons were even given another opportunity to squander at the end of a second overtime period felt like something of a minor miracle after the way they had played in regulation.

Down three points in the final seconds of the second overtime, the Dons sent 49ers freshman Madison Montgomery to the free throw line in a bonus situation. After the freshman gave the Dons the gift of renewed hope by failing to convert an opportunity that would have put the game out of reach, Long Beach managed to recover the offensive rebound as 6-foot-3 USF forward Paige Spietz standing in the middle of the paint and watching the ball instead of boxing out. USF sophomore Zhane Dikes managed to sprint over to force a jump ball, but with the possession going to Long Beach the game was over after a simple inbounds play underneath their own basket.

The final moments of the game were a sadly fitting end to a game that should never have been as close as the drama of a double overtime suggests: the Dons were consistently beaten to dead balls when they needed them most, giving up two offensive boards in the final 31 seconds. They struggled to locate ball handlers to stop the ball in transition, giving the 49ers a number of relatively easy scoring opportunities that they managed not to convert. Their rotations out to 3-point shooters were often late, even if Long Beach only shot 8-for-24 from beyond the arc. Their perimeter defense was porous, to say the least, with Long Beach guards feeling little resistance as they drove into the paint to set up post players left wide open for layups as USF defenders rotated to help.

The numerous defensive lapses compounded the self-harm inflicted by those 27 turnovers. And throughout the game it looked like the NCAA's new rules were a further impediment to victory for the Dons.

Part of what allowed Long Beach to hang around in their season opener at Cal back on November 8 was that they attack the basket rather confidently, if not efficiently - they only shot 18.2% in the first half of their 70-51 loss to Cal, again missing a number of close range shots off drives and transition. It thus stood to reason that USF - a team with less quickness around the perimeter than Cal - would struggle with Long Beach State's aggressive mentality from the perimeter and that's pretty much what happened.

The 49ers' ability to beat the Dons to offensive rebounds quicker and earn high percentage looks at the basket off penetration were symptoms of an advantage that the Dons just never managed to overcome: they were often caught trying to play defense with their hands or just allowing the opposing player to fly past them unchecked. Although the officials made a number of controversial calls that went both ways - there were points when they seemed to be calling any contact, rather than just the contact identified by the new guidelines - USF got to a point where they were neither making contact nor staying in front of ball handlers or fighting for position in the post. 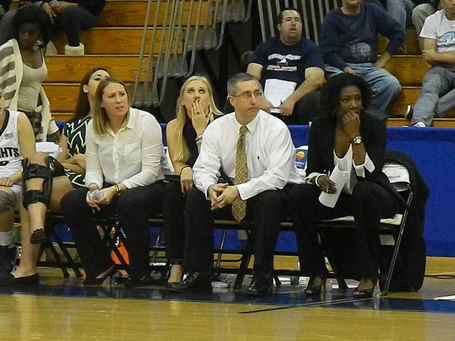 Ray Floriani discussed the NCAA's rules changes with coaches at NEC media day. Although they differ on the benefits, they agreed something had to be done.
Comparing the way things played out against the Dons to how they played out against the Golden Bears reinforced a comment by Cal coach Lindsay Gottlieb a couple of days after they beat Long Beach State at Haas Pavilion: teams with quickness around the perimeter will have the easiest time adjusting to the new rules. The flip side is that teams lacking in perimeter foot speed will struggle quite a bit.

While foul trouble wasn't necessarily a defining feature of the game for either team, it did become particularly significant in the second half when the Dons seemed to be building momentum that they could carry to a win.

Down 30-28 after the first half, the Dons went on a 13-2 run over the first 3:20 of the second half to take an 8 point lead as Long Beach struggled to get anything going - 49ers coach Jody Wynn took four of her starters out of the game about halfway through that run, presumably as a "motivational tool". However, after versatile USF sophomore Taylor Proctor had to leave the game with her fourth foul with 14:42 left in regulation, things seemed to fall apart for USF as Long Beach went on a 15-3 run of their own over the next 7.5 minutes.

If you're a Dons fan looking for positives though, the fact that USF showed the resilience to push the game to two overtimes despite the second half onslaught they endured is it - in the past, they might've folded and allowed the visitors cruise to a win by a comfortable margin. But big threes by Proctor and Winston in the final minute of regulation helped send the game to overtime. Proctor's clutch free throws at the end of the first overtime after being fouled on an aggressive drive to the basket forced a second overtime, where there numerous mistakes throughout the game caught up to them.

But this is a young team that is clearly still figuring out how to bring everything together: skilled freshman Rachel Howard finished with a team-high 16 points, Proctor was two rebounds shy of a double-double (10 points, 8 rebounds) that would've been easier to attain had she not been forced to sit for an extended period in the second half, freshman Zhane Dikes was just 4-for-18 yesterday but has potential as a floor leader to help bring this team together. The bottom line is that they had more than one option out there to make things happen, which is not the norm for this program - the very fact that they had enough talent to come up with big plays when there was every reason to believe that all was lost is a step forward for a program that is on the upswing almost any way you look at it.