The Atlanta Dream were within striking distance of the Minnesota Lynx as late as the third quarter but poor shot selection during a crucial stretch did them in.

Despite the impressive shooting performance from the Lynx and the lopsided final score, Game 2 of the 2013 WNBA Finals was actually closer on the scoreboard than Game 1 for much of the game.

With 4:13 left in the fourth quarter the Atlanta Dream were only down by 10 points to the Minnesota Lynx. Then the Dream's shot selection was pretty much the nail in their own coffin: they shot four threes down the stretch of the third quarter and found themselves down 16 entering the fourth. 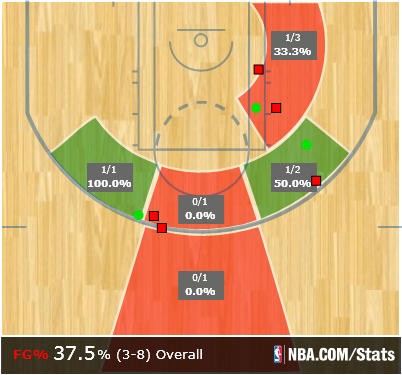 The Atlanta Dream's shot chart for the final 4:20 of the third quarter of Game 2 of the WNBA Finals.

The frustrating part about watching the Dream's shot selection was that it was mostly unnecessary - so many of these shots were taken early shot clock rather than something they were forced into by the defense. After the Dream got down by 15 points with 2:43 left, coach Fred Williams took a time out and encouraged his team to get the deficit back down to 10 before heading into the fourth quarter - on the possession immediately following the timeout, rookie point guard Alex Bentley launched another 3-point shot.

Compounding the frustration was that the Dream fell victim to a similar vice in Game 1 that bears repeated: Williams noted immediately after Game 1 that the team needed to cut their 15 3-point attempts from Game 1 in half; although they got it down to 10 for the game, they had four 3-point attempts in the final 4:20 of the third quarter.

The Dream aren't going to beat the Lynx that way - they simply can't afford to squander possessions against a team as good as the Lynx. Williams knows that. Fans who have watched the team for any amount of time this season know that. And yet it's not coming together on the floor.

Yet were it not for foul trouble once again, might not have been in the dire situation they found themselves in heading into the fourth quarter.

Both Erika de Souza and Angel McCoughtry picked up three fouls apiece in the first half that limited their minutes and effectiveness as the Lynx entered halftime with a 15-point lead. With both of their minutes limited, the Dream did well to keep it even that close and we very much aided by Lynx turnovers throughout the game. 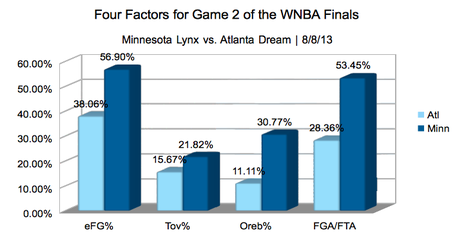 Unfortunately, the Dream were unable to capitalize on those (uncharacteristically frequent) turnovers while the Lynx were doing everything else extremely well, including shooting - along with Minnesota's impressive free throw rate, it has to be noted that they shot just one three the entire game (a wide open attempt from center Janel McCarville in the third quarter).

While Dream players were putting up shots that they struggle to make on a good day, the Lynx were working as a unit for high percentage scoring opportunities to reach historic levels of efficiency.

It's still not impossible to imagine the Dream winning a game in this series, but if they can't stay out of foul trouble and find a way to get get higher percentage scoring opportunities when they need points they'll be heading into the offseason with yet another winless WNBA Finals appearance.

For more on the series, check out our 2013 WNBA FInals storystream.