Share All sharing options for: The difficulty of visualizing the Atlanta Dream's really poor performance in Game 1

After yesterday's post displaying the Percent Valuable Contributions (PVC) chart for the Minnesota Lynx in Game 1 of the WNBA Finals, JustineL requested the same for the Atlanta Dream.

And it sort of requires some explanation as you'll probably see below: 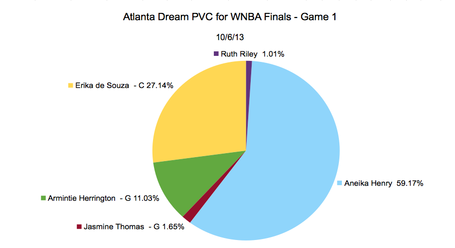 Obviously, that's only five players...because the rest of the roster made "negative contributions", as you'll see in the table below:

PVC data for the Atlanta Dream in Game 1 of the WNBA Finals.

In each case of negativity, the reason was simple: a lot of missed shots and not many other positive things to make up for them. The only thing saving Jasmine Thomas from negativity was three offensive rebounds and a couple of steals.

All that negativity of why it's possible for two players (Aneika Henry and Erika de Souza) to combine for more than 100% of the contributions to the team's performance: they were "making up" for all the negative performances, which broke the chart.

In short, it was not a good performance and there's really no reason to expect they'll perform that poorly twice in one series regardless of the outcome.

For a look at the Lynx's chart, check out yesterday's post on their performance.