Momentum, the Minnesota Juggernaut, and hope for the Atlanta Dream in the 2013 WNBA Finals

A big 15-0 run for the home team in the second quarter of Game 1 of the 2013 WNBA Finals was both an example of the Minnesota Lynx's dominance this season and reason for hope for the Atlanta Dream after suffering a blowout loss.

Share All sharing options for: Momentum, the Minnesota Juggernaut, and hope for the Atlanta Dream in the 2013 WNBA Finals

Women's basketball fans were quick to use the Atlanta Dream's lopsided 84-59 loss in Game 1 of the 2013 WNBA Finals on Sunday night as an excuse - or perhaps final confirmation - to write them off for good in anticipation of yet another failed bid for a title.

Yet of course, neither the Dream nor the Minnesota Lynx were so dismissive of the underdog's chances, with Dream All-Star Angel McCoughtry described as "defiant" by AP reporter Dave Campbell in her response to the notion that the first game would have any lingering effect on the series itself.

"We're not going to be down. What's the point? It's over. We're movin' on," the WNBA's leading scorer this season said after shooting 6-for-24 and finishing with five turnovers and 17 points. "We're going to keep our heads up, and we're going to continue to believe. We have confidence in ourselves. We believe we can win a series."

The cynical among us will dismiss this as just the standard cookie-cutter response that we've only come to expect from a star player, but there's probably good reason for the Dream and their fans to remain confident about their ability to compete in this series.

The big shiny flashpoint in Game 1 was Minnesota's 15-0 second quarter run that sort of typified a pattern that those who watch them closely might have found familiar: once they figure out how to exploit an opponent's weaknesses, they eventually find a rhythm, get hot, and proceed to obliterate them. And once in that zone, they just keep gaining confidence which makes them more relentless offensively and each defensive stop they make that much more demoralizing.

And there might be some (possibly weak) statistical evidence of such a demoralizing effect: Lynx media notes will tell you that they were 24-2 in games in which they led at the end of three quarters during the 2013 regular season. But a bit of additional digging shows a marginally more impressive track record: excluding the August 11 loss to Chicago on the road without center Janel McCarville (how's that for a caveat?), the Lynx were 26-1 in games when they managed to establish a double digit lead. The one game in which they blew a double-digit lead was their loss in the final game of the regular season to the Los Angeles Sparks and even in that case they got out to a fast start with an 11-point lead in the first quarter that quickly evaporated in the second.

In contrast, the Lynx are 1-6 in games that they've only managed to get ahead by six or less, with the one win coming against the Phoenix Mercury when they were still in shambles.

For the sake of argument - and acknowledging the tiny sample size - let's accept the notion that opponents have to stay within 2-3 possessions if they have any hope of beating the Lynx, especially at home; that's where a closer look at how Game 1 unfolded might provide reason for optimism for the Dream heading into Game 2.

The importance of stopping the Lynx from getting started

When the Dream began the second quarter of Game 1, they were down just 8 points - still within striking distance. With McCoughtry on the bench with two first quarter fouls in the first three minutes of the second perior, they fell behind by 10. McCoughtry re-entering the game at the 7:10 mark helped them get the lead back down to 6. But with McCoughtry clearly hampered by her foul situation - the Dream tried to hide her by putting her on Janel McCarville who is not a primary scoring option for the Lynx - the lead quickly ballooned right back up to 10 and then 15 at the 3:48 mark when Tiffany Hayes was injured not to return until the third quarter.

At that point, the Lynx had built the momentum that has signaled doom for opponents all season: they went on to shoot 60% in the second quarter en route to a 19-point halftime lead.

Of course, none of this is really to say that the Dream would've won this game had McCoughtry not gotten in to foul trouble and Hayes not gone down due to injury - it's never possible to find the outcome of a counterfactual scenario. At the same time, it is possible to suggest that McCoughtry's foul trouble and Hayes leaving the game with an injury contributed to the Lynx being able to build momentum.

Is momentum a real thing (for the Lynx)?

Juggernaut has not released a statement in response to the studies of momentum, but he'd surely have an interesting perspective (albeit similar to basic Physics).

In wondering why we put so much stock in momentum, Grantland's Bill Barnwell opened by describing a Google search that showed that, "For every usage of the term as it applies to the physical concept involving mass and velocity, there are 30 articles that seem to describe taking some prior moment of success or tipping point and using that as a springboard to future success."

And he has a point there: people really do use momentum to describe something that occurs between games in a series, between games over half a season against different opponents, and even between seasons. Yet it all reflects a very similar sense-making process: trying to find an explanation for an extended sequence of success in sports.

The problem is that there's scant quantitative evidence to match the (seemingly self-evident) qualitative claims, which makes it a sports concept that might have the greatest differential between what people think they see and what others can actually measure. Whether talking about the notion of a hot hand (and Grantland's Zach Lowe wrote a must-read piece on that phenomenon) or a team experiencing increased success after some trigger occurs, the debate over whether momentum is a "real thing" or just a "cognitive illusion" might never be resolved.

However, Russell A. Carlton of Baseball Prospectus made an important point in his recent discussion of momentum in baseball:

The data suggest that the effects can be large, but are probably highly variable across different players. That makes sense because… well, people are different... In the sabermetric community, we’re often too quick to dismiss that the human element can have an effect. Maybe stress inoculation really does work. If we’re going to call ourselves proper scientists, we need to be open to that possibility.

Let's eschew the notion of momentum either being easily measured or just not existing; if we instead embrace the notion that thing we call "momentum" could be some combination of "...changes in cognitive (i.e. self-efficacy, motivation), affective (i.e. positive or negative feelings) and physiological (i.e. arousal) factors" - as described in an article published by Peak Performance Online - that simply can't be easily quantified given individual differences in responses to a catalyst, that thing we see from the Lynx could be an interesting example of the phenomenon.

At the very least, we know that something happens for the Lynx when they get a lead - they not only have these spurts that help them establish significant leads but also appear extremely good at remaining in firm control of games with just a cursory look at the results (i.e. turning double-digit leads into wins). And so without looking at the performance of every team in the league along these lines, it seems reasonable that the Lynx are a team that thrives on that self-reinforcing cycle of psychological changes that we call "momentum": once they get rolling and realize how to maximize their possessions against an opponent, it's not unreasonable to believe that a unit this talented and this experienced with success would theoretically experience a heightened state of focus that would minimize the effects of stress or anxiety.

Conversely, once we begin to frame momentum in explicitly psychological terms, it's also clear that negative momentum might also be a factor in some game outcomes, which adds an interesting wrinkle to the story of Game 1: it's not at all unreasonable to argue that the Dream never fell into the psychological abyss of negative momentum but instead found themselves facing circumstances that made success much more difficult. In short, consistent with what McCoughtry said, there's no reason for them to believe they can't compete with the Lynx.

Contrary to popular opinion, the Dream actually did compete until the situation began to tilt in favor of the Lynx (who seemed to be running downhill toward toward a bucket with a 20-foot circumference). And after a few minutes, the Lynx were just riding a wave of confidence - buoyed by an active crowd - that simply was not going to be stopped.

But if the Dream can play more like the way they did in the first quarter they'll have a chance. Dream coach Fred Williams even identified a major cause of their problems in that AP article: they needed to cut down on the perimeter shots. And the first quarter was a great example of how they need to play to compete: they shot a respectable 43.8% from the field, due in part to shooting just two threes and putting up the majority of their shots (56.2%) right around the basket. 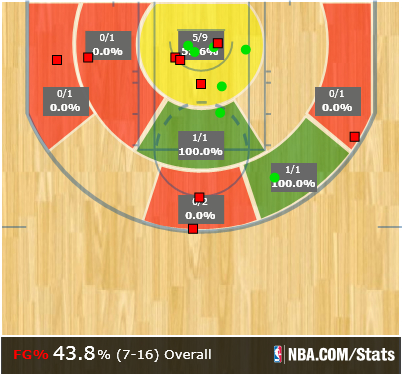 Atlanta Dream shot chart from the first quarter of Game 1 of the 2013 WNBA Finals.

Of course, the Lynx defense deserves credit for the Dream's historically poor shooting the rest of the way but that doesn't negate the point: with Hayes and McCoughtry in the game, the Dream would be in much better position to compete with the Lynx than they were on Sunday night.

Naturally, all of this talk about momentum had me thinking of the Marvel character Juggernaut. For those of you who are unaware of who he is, make yourself aware a line from the Wikipedia description about what it took to defeat him seems relevant to this discussion: "The only character to have stopped Juggernaut while he was in motion as an act of pure physical strength was the Hulk while he was War, a horseman of Apocalypse."

Regardless of your thoughts on the influence of momentum in sports, it's probably fair to say that it has been best not to allow the Lynx to get into their rhythm unless you have special powers working for you.

For more on the Dream and Lynx, check out our 2013 WNBA Finals storystream.