A big night from Monica Wright was the headline story for the Minnesota Lynx after Game 1 of the 2013 WNBA Finals, but as impressive is how a pair of the team's All-Stars deferred while one of the league's top Sixth Woman of the Year candidates turned in a career night.

Share All sharing options for: Minnesota Lynx show off the flexibility of their roster in Game One rout

The Minnesota Lynx's 84-59 win in Game One of the 2013 WNBA Finals was a pretty good example of what makes this team so difficult to beat.

The Atlanta Dream's defense did get 15 turnovers out of the Lynx, winning the turnover (percentage) battle by a narrow margin. All-WNBA point guard Lindsay Whalen was held to just 3 points on 1-for-4 shooting, which is a positive for any opponent. All-Star forward Rebekkah Brunson had a team-high 5 offensive rebounds, but only scored 4 points on 2-for-6 shooting.

But that wasn't enough to stop the Lynx.

There's a reason there's so much talk in basketball about big threes: when a team has three threats on the floor in a five-on-five game, it's simply impossible to stop all of them. But what's interesting in this case is that the Lynx are a team normally known for their balance: four All-Stars working together and sharing the burden to overwhelm teams; last night, that normal statistical balance wasn't there. 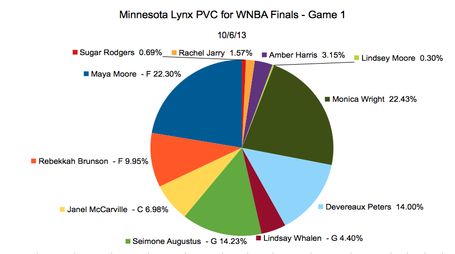 Percent valuable contributions for the Minnesota Lynx in Game 1 of the WNBA Finals.

In most cases, I'd look at a chart like this with three players (Seimone Augustus, Maya Moore and Monica Wright) doing nearly 65% of the work (and really, two doing nearly 50%) and claim that they didn't get enough help from their teammates to win - in fact, it should come as little surprise that the Chicago Sky's charts often looked like this.

But they also did something that has almost uniquely defined the Lynx in the WNBA over the last few years: those three players taking the majority of their shots (44 out of 77 or 58%) were also by far their most efficient.

Meanwhile, Brunson was rebounding (game-high 25% offensive rebounding percentage), Whalen was doing her thing as a distributor (game-high 5 assists), while center Janel McCarville overcame pre-game concerns about back soreness to limit Dream center Erika de Souza's role as a scorer. And they did a pretty good job defensively too.

Game 1 wasn't the normally near-perfect statistical balance we normally see from the Lynx but it was an awfully good example of the flexible division of labor that they've shown throughout the last three seasons that makes them extremely difficult to game plan for - any team with as many threats, whether scoring or otherwise, as the Lynx have is going to find a way to win games.

For more on the Finals, check out our 2013 WNBA Finals storystream. For a full recap of Game 1, check out Canis Hoopus.