A Call for "What-If" FanPosts for your favorite WNBA team

Happy Halloween! The WNBA season is over and there isn't much news to talk about, except waiting for the CBA to be ratified, or if we're pessimistic, perhaps the first ever lockout or union strike, though that's unlikely. But in the meantime, let's re-hash some of the past NBA theme weeks in the summer and get everyone involved.

Share All sharing options for: A Call for "What-If" FanPosts for your favorite WNBA team

That's right, I'm bringing back "What-If." But instead of me writing a What-If for every team, most of which just won't be all that interesting, I want to read some other What-If stories. So here's the detailed question:

What if your favorite franchise could change a pivotal moment from within the last decade or so?

That's right. You can get to re-write your team's history. The things that we ask is that you:

1. Don't try to bring back the star players from before 2002. The story is more interesting when it involves current players. (ie of stars before 2002 - Cynthia Cooper, Teresa Weatherspoon, etc.)

3. Piggybacking off of #2, we want you to focus on ONE What if question and then go off from there in a detailed manner.

4. Feel free to make the outcome better or worse with that move, even if the worse happens to your team.

5. Back in August, I wrote a What-If involving the Washington Mystics which is linked below and while it certainly is an example of something you could do, it is admittedly a very long piece. Some other SBN NBA sites wrote shorter, but also in depth pieces. For example, Silver Screen and Roll, our Lakers site and Fear the Sword, our Cavaliers site both have shorter and substantiative pieces which you could use as examples to help get your points across. 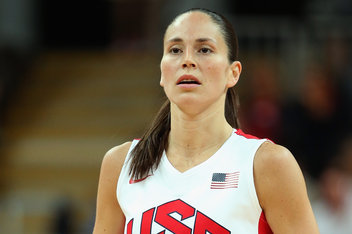 Yeah, this one's long and it's dreamy. Nate thought it was "too good" in not a good way. But I think you guys can one-up me with a "What-If" post, right?

The SBN NBA Theme weeks were intended to help the NBA team blogs put in some thoughtful material during the summer which can be pretty boring, especially between Summer League in July and late September when training camp starts. When blogs don't put posts out regularly, people stop going there.

As a member of the SBN NBA network, we definitely wanted to chip in our thoughts which we did. But at the same time, there were regular season games, so it wasn't an ideal time to have those kinds of posts. In the summer, fans don't want to talk about "What If." They want to talk about the games for each day.

So now, I'm bringing it back, because it is the offseason, and though I know that there's college basketball, at least some of you may care more about the professional game than the college game, because that's the highest level of the sport. And that describes me.

Why should I write a FanPost?

First, we haven't seen many FanPosts, which is an opportunity for some of you to write on teams and areas in the women's game that we don't write too much about. Anyway, let's hit some reasons why people don't write FanPosts:

1. Some community members may just "hope" that a contributor writes on the topic you want to discuss. On obvious news topics, we'll cover them, but we can't give a more fan-perspective on various things if we're not fans of that team. And the contributors do read those posts when they come out if no one else. Trust me.

2. They think it takes too much time and are afraid of not having perfect grammar, etc. If you write a 200 word comment, that definitely is enough for a FanPost. And with spelling/grammar, we can edit it when necessary.

3. They are afraid of backlash or being called haters if they write something out of the norm. Don't be. The First Amendment of the Constitution has your back, barring malicious threats, libel, and the like.

Case in point on someone who's a Mystics "hater," me. I've written plenty of things about DC that go against what many Mystics fans feel, such as not wanting Tianna Hawkins in the 2013 Draft and moreso about Sugar Rodgers, but really in particular with Crystal Langhorne, and it's no secret that I want her on the trade block because she isn't a foundational piece for the future here, not because "she sucks" and I never said that about her. But I digress.

1. They add more in-depth perspectives on various subjects that contributors just don't have.

2. FanPosts are a way to show your fandom. And SB Nation was built around fans not only commenting which is like what you see on a message board, but also posting substantiative things. We're not a message board where any random dude can write something and it gets on the front. And we're not just a news site; most SBN bloggers aren't journalists by trade. We're just like you, fans.

3. FanPosts do not become "irrelevant" as quickly as comments do. There are many more comments posted than posts. And it's harder to reference comments than posts.

4. If they're really good and rec'ed three times, we'll put it on the cover.

5. We may miss a news story that is relevant to a team or a particular player. This is a chance for you to write on it and we may just front it right then and there. In fact, if any posts seem very good to us, we may just put it up immediately.

Okay, for this offseason series, after you post a What-If scenario, if it is reasonably substantiative, meaning that there's a good story to read regarding your what if scenario, we'll put it on the cover.

That will optimize the number of people viewing your post because when people log on here, generally they click on the cover stories first. However, we do reserve the right to change the cover as needed when breaking news occurs which may bump your post down temporarily but we can always put it back up.

So that's all I have here.

I hope to see a "What-If" for ALL 12 teams in the league by the time this is over which we'll give a couple weeks for in order to allow folks to post things and for stuff to get on the Front Page. Perhaps we could also include some of the teams that folded in the last five years or so like Houston and Sacramento, as well as the Shock before relocation. In addition, feel free to write another What-If regarding the Washington Mystics, in particular one that may be more realistic to your tastes since mine was admittedly pulling out all the stops.

We look forward to reading your FanPosts.