With 6:23 left in the first quarter of the Minnesota Lynx's loss in Atlanta on August 20, coach Cheryl Reeve took a timeout to try to stop the Atlanta Dream's momentum.

After racing out to a 6-0 lead, the Dream were up 10-4 and nothing seemed to be working well for the Lynx - they were looking disoriented as an active Dream defense applied pressure on the perimeter and they couldn't seem to stop Dream penetration on the other end.

More: What we learned from the Dream's win in Atlanta Highlights from Minnesota's loss in Atlanta How the Lynx stifled the Mercury to advance to the Finals

Needing a boost, Monica Wright gave it to them.

It would be wrong to say that Monica Wright came in and single-handedly shifted the momentum of that game - the Lynx did end up falling behind by as many as 17 points in the first half anyway on their way to losing the game - but she did start to redirect things a bit.

In the minutes following Wright's insertion into the game out of that timeout, the Lynx seemed to find a second wind.

It's the little things that Wright did to influence the game that weren't necessarily preserved in the box score: pressuring the smaller Jasmine Thomas as well as guarding the bigger Angel McCoughtry on defense. Running the offense in Lindsay Whalen's absence and being the beneficiary of a turnover she created by hitting the game-tying layup a little more than a minute after she came in.

Of course, Wright probably made an even bigger impression on both opposing players and fans when Atlanta visited Minneapolis for their first meeting of the season: in her first start of the season - replacing the injured Seimone Augustus - Wright set a season-high with 22 points.

In addition to her standard role as defender and ball handler, Wright played a major role offensively in the first regular season meeting between the two teams as she scored 8 points in the first quarter to help set the tone for the game. Wright began that game in full attack mode, aggressively driving past Dream defenders and even taking a jumper they gave her gift wrapped with a bow on top. 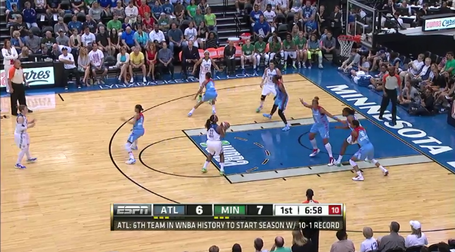 Wright played only sparingly in the second quarter as the Lynx opened up a big lead but finished the game shooting 8-for-8 from the free throw line on her way to setting that season-high. Two days later in Minnesota's 2012 WNBA Finals rematch against the Indiana Fever on July 9, Wright matched her season-high in scoring and added a career-high 9 rebounds for good measure.

Ultimately, Wright does a little bit of just about everything one could ask of from a reserve perimeter player.

"Without her, we're definitely not as strong and as tough as we could be," Lynx forward Maya Moore said in a media teleconference prior to the Western Conference Finals. "She's so aggressive on the offensive end, can get to the hole and knock down an open shot. Really a scrappy, physical defender for us and gets in there and rebounds. She does a little bit of everything for us."

Wright's performance this season can easily get lost in the discussion about what makes the Lynx such a formidable opponent and, even in demonstrating her strengths, her two very different performances against the Dream during the regular season sort of illustrate why: in having so many roles in support of a dominant starting lineup full of Olympic-caliber All-Stars, Wright can blend into the action without standing out in any one particular way until you take the full breadth of her impact into account.

But it's easier to maintain that dominance over the course of the season and into the postseason with a flexible roster.

"What she's been giving us in versatility," Reeve said in a media teleconference yesterday when asked about Wright. "Whether it's a high pressure situation from an athletic standpoint that I need her to be able to break through with her speed and quickness, or whether it's size, defending a Diana Taurasi, size and strength."

"I think my experience in the playoffs...(is) that it really does become about your X factor players, and I would put Monica at the top of that for us."- Minnesota Lynx coach Cheryl Reeve

If the regular season meetings with the Dream are any indication, one aspect of Wright's game might be particularly significant to the Lynx in the 2013 WNBA Finals.

As described previously during this postseason, the Lynx rely more heavily on mid-range jumpers than any team in the league and why not when they have Augustus and Moore to knock them down? Wright's concrete contribution to the team is that she's a wing who gets to the rim at a high rate: her 33.5% free throw rate from the regular season was second-highest on the team, narrowly trailing Whalen's 33.9% rate. With her ability to get herself to the free throw line - something that both Augustus and Moore are capable of but tend to do less often - Minnesota's offense becomes that much more dynamic and difficult to defend.

Especially against an Atlanta team that can be foul prone in the course of pressuring opposing perimeter players.

"I think my experience in the playoffs - especially when you get this far - (is) that it really does become about your X factor players, and I would put Monica at the top of that for us," Reeve said. "She's been really, really important on both sides of the ball for us, and there is no question that, if you look at our team - kind of like Tiffany Hayes for Atlanta, when she was coming off the bench - that when those types of players off the bench are productive, it makes it that much better for the starters, takes a little bit of pressure off of them, and that's going to be huge in the series."

Although Riquna Williams gave the Tulsa Shock exactly what they needed this season, Monica Wright offered the Minnesota Lynx more flexibility with their rotation.

It should come as little surprise that the WNBA Finals includes two of the top three candidates for the Sixth Woman of the Year award this year: although that's not always the case, both offered that change of pace dynamic that both made their offenses more dynamic and gave them some flexibility on defense. It should also come as little surprise that Riquna Williams won the Sixth Woman award: after a historic 51-point night and her ability to fill up the scoreboard quickly, she was as deserving of the award as anyone and had a ton of statistical support in favor of her candidacy.

But this is one time (of many!) that my choice for Sixth Woman went against the statistical tide: what can't be quantified well is what it means for a team to have contributors off the bench who can be trusted in various roles to take pressure off the starters and give the coach some lineup options when they need a boost or response to a specific matchup.

In the playoffs, when teams generally shorten their rotations in both the NBA and WNBA, having multiple options all wrapped into one player who can bring a unique strength to the floor is huge.

Monica Wright has been all of the above this season.

"Monica is extremely important to this team," Moore said. "She's definitely, I think, when it comes to being a teammate, she's one of the best...has such a great attitude and is extremely talented and embraced her role for this team and has done nothing but amplified our potential."