Three keys to the Minnesota Lynx winning the 2013 WNBA Finals

The Minnesota Lynx are generally considered the favorite to win the 2013 WNBA Finals, but the pair of regular season meetings between the two teams showed how the Atlanta Dream are a team that will capitalize on any mistakes the favorite makes.

Share All sharing options for: Three keys to the Minnesota Lynx winning the 2013 WNBA Finals

The reality is that Atlanta Dream All-Star Angel McCoughtry is not going to be "stopped" - the best an opposing defense can hope for is to contain her.

And I say that in the least Sportscenter cliche way possible.

Even if McCoughtry shoots under 30% - as she did in the two games against the Minnesota Lynx during the regular season - she can find points by getting to the free throw line, scoring in transition, forcing steals, or scoring second chance points off of offensive rebounds. And a significant improvement in her game this year has been her willingness to pass the ball more.

Although a skeptic might look at McCoughtry's increased assist numbers and wonder if her career-high 31.4 minutes had anything to do with her career-high 4.4 assists this season, it's not quite that simple - she has just been a more efficient ball handler all around. Her assist ratio increased about 3% this season while her turnovers declined a bit making this her best year as a distributor when taking into account how much she's responsible for. And it really stands out because the trend over her career suggested that she was just doomed to be an extremely inefficient passer.

So that frames the challenge of guarding McCoughtry this season: she's going to find ways to beat you even if she's an inefficient scorer (and why she was probably worth whatever attention she got as a MVP candidate).

"She's an incredibly determined player, has a strong will, and I think the word relentless is what comes to mind for me the most when watching her," Lynx coach Cheryl Reeve said during a media teleconference yesterday. "Whatever she's doing, she has a relentless approach about her. That makes it very, very challenging, and I think her team feeds off of that."

Not to ignore that basketball is a five-on-five game, but defending the Dream fundamentally comes down to how a team defends McCoughtry. So obviously the key to the Lynx beating the Dream in the 2013 WNBA Finals somehow involves doing something with McCoughtry.

Common sense would suggest that an opponent would want to force McCoughtry to become a jump shooter - McCoughtry is a well below average shooter from the 11-21 foot range, according to data provided by the Lynx. And even in taking the volume of shots she took from that range - 165 shots (32.1%) from the 16-21 foot range was second most in the league behind only New York Liberty guard Cappie Pondexter (26.2% on 183 shots) - it doesn't necessarily hurt her team: they rebound so well as a unit that there's an argument that it's like a potential assist (i.e. "Kobe assists").

Instead, the key to "containing" McCoughtry is ultimately about how a team responds to her forays into the paint - her combination of athleticism, size, and pure almost guarantee that she'll find her way to the rim.

Minnesota's first two games against Atlanta provided ample examples of how to defend McCoughtry both well and poorly. And most of the former came from the first game on July 9 (a win) while many poor examples came on August 20 (a loss). Obviously, the key is "help defense" - she's eventually get by anyone guarding her and opposing defenses will have to rotate as a unit to impede her path.

And yet, it's the temptation to completely collapse on McCoughtry that can get a defense into trouble. 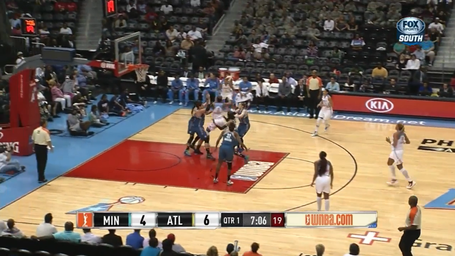 McCoughtry driving against the Minnesota Lynx on 8/20/13.

In the middle of that mass of blue players all in the paint is a driving Angel McCoughtry. Outside the mass of blue are four of McCoughtry's Atlanta Dream teammates almost entirely unaccounted for. In this instance, McCoughtry passed to a wide open Jasmine Thomas in the corner who knocked down a jumper. But you can probably also see where a scenario like this - where the defense directs attention to McCoughtry at the exclusion of everyone else - can cause problems: the Dream get a number of offensive rebounds, layups, and jumpers (like this one) from defenses giving McCoughtry their undivided attention.

In their win on July 9, the Lynx did a much better job of both cutting off McCoughtry and staying in position to cut off her passing options.

The Dream like to utilize a lot of high on-ball screens and depend on their quickness to turn the corner on defenders and get to the rim. The following is a pretty typical example: 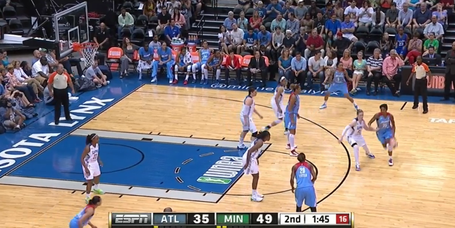 This possession began with Maya Moore guarding McCoughtry before a screen caused Lindsay Whalen to switch onto her. You'll notice that as McCoughtry dribbled from left to right, Whalen seems to be anticipating a screen to come from Sancho Lyttle. 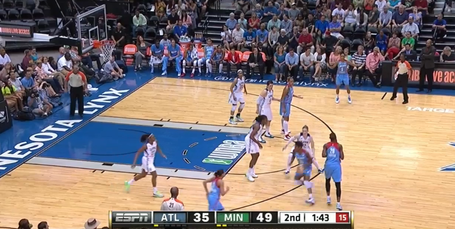 Regardless of whether this was a blown play by Atlanta, Whalen was beat and Brunson didn't slide over which left McCoughtry a lane to get to the basket. But the important thing here is that everyone else is still in help position, including Monica Wright. 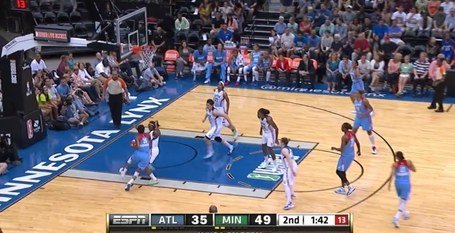 Wright stepped over to guard McCoughtry and though she did get into the paint - in a one-on-one situation no less - she wasn't going to get a clean look. Although it was pretty clear that McCoughtry wasn't going to pass the ball at this point, you'll also notice that Minnesota's defense was situated such that there wasn't a clear passing lane to anyone in particular: Moore probably could've stayed closer to Thomas, but that's a cross court pass to the 3-point line leaving plenty of time to recover. Price took herself out of the play while clearing out for McCoughtry's drive while Brunson and Whalen had the two remaining players covered.

Meanwhile, McCarville played the role of enforcer here getting a big block while Wright was able to slide over to contest with two hands straight up. 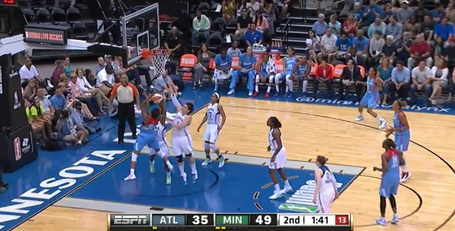 That's not necessarily a perfect scenario: the Lynx would still have to account for the Dream players flying in on the offensive rebound and Moore is technically not in a position to do much except get a potential defensive rebound if it came right to her.

But this is also about as good as it gets in guarding McCoughtry: someone has to help and that's going to create problems. Ideally, a team would want to stop McCoughtry from turning the corner - both Brunson and Whalen could have on that play were it not for some apparent confusion - but it's very rare to see McCoughtry just get stopped once she decides to turn the corner.

On this possession helping on McCoughtry caused major problems as four players ended up having to take turns doing something to stop the Dream from scoring. At the same time, it's an example of how well a defense has to work together to defend her - there's very limited room for error and each mistake leaves someone else to pick up the slack. It worked out on that situation because the Lynx were in good enough position to contest her shot.

Driving with the intent to score

But it probably goes without saying that the Dream thrive on defense, using their athleticism to frustrate opponents into mistakes.

However, teams that like to pressure the ball in the aggressive way that the Dream do leave themselves open to drives if they overplay. The Dream rotate far too quickly to sit back and wait for a play to develop; though the Lynx have the jump shooters to win just by finding perimeter shots, forcing the Dream to pay for their overplaying mentality is the easiest way to put up points quickly.

That definitely showed up in the two regular season meetings between these two teams. Although some fans will unquestionably chalk up the free throw disparities to standard complaints about the league's officiating, it really reflected a difference in mindset for the Lynx.

Free throw attempts for the Dream and Lynx in their two regular season meetings.

Wright's value to the Lynx

In the first of the two meetings, the Lynx - led by a great start to the game by Monica Wright - were a lot more aggressive in attacking the basket off the dribble in the first game; in the second game, they ran into problems when they started passing the ball around the perimeter waiting for openings to appear - they rarely came and the Lynx quickly found themselves down double digits.

Whalen led the Lynx with a free throw rate of 33.9% during the season, which is impressive for a point guard. But, as is often the case with changes in free throw rates, it wasn't just a matter of finding her way to the line but more aggressively getting into the paint generally: she had 7 shots inside the restricted area in Game 1 and 4 in Game 2 (one of which resulted in the lone free throw for the game).

When Whalen and Wright are aggressively attacking the basket, this Lynx team is hard to stop because they still have the long-range threats of Augustus and Moore to lean on. And there's something else that having two aggressive ball handlers might help the Lynx with: turnovers.

If the Lynx are decisive instead of looking for others to make plays, they'll be in better position to control the ball overall.

The Dream and Lynx had two of the best turnover rate differentials in the league but they did it in different ways: the Lynx committed the least and the Dream forced the second-most. Naturally, turnovers helped determine the outcomes of the regular season meetings.

And that obviously helps the Lynx with their transition defense. The Dream are going to run off of defensive rebounds and even made baskets, so getting back to defend that will obviously be imperative for the Lynx. But they can seriously curtail those transition attempts by keeping the ball in their hands when they have it.

Ultimately, the Lynx will win or lose the 2013 Finals on the defensive end - they'll will likely get their shots regardless of whatever the Dream do to them. But the Dream need easy shots to win, whether that be in transition or relying on McCoughtry to create. Although the Dream were without Tiffany Hayes on July 9 - who certainly changes what we should expect from them offensively - the Lynx showed then that they are capable of outstanding team defense that simply makes things hard on McCoughtry when working together.

For more on the Lynx and Dream, check out our 2013 WNBA Finals storystream.