Despite a much-improved effort from the Atlanta Dream in Game 3 of the 2013 WNBA FInals, the Minnesota Lynx just had too many weapons as they completed a three-game sweep to earn their second WNBA title.

Share All sharing options for: Minnesota Lynx win Game 3 of 2013 WNBA Finals with another well-rounded effort

Perhaps surprisingly, both the Atlanta Dream and Minnesota Lynx had somewhat uncharacteristic performances in Game 3 of the 2013 WNBA Finals: while the Dream shot 52.9% from the 3-point line, Lynx center Janel McCarville had 10 points in the first half - 3 points above her playoff average - and a pair of steals.

Yet the Lynx ultimately had a few too many weapons on their way to an 86-77 win at the Gwinnett Center to clinch their second title in three years with a sweep (box score).

For the Dream, the difference-makers came from their bench with Alex Bentley recording 18 points and a team-high six assists to offset some mental lapses and Tiffany Hayes giving the Dream the perimeter scoring threat the team has lacked for a game-high 20 points including 4-for-6 shooting from the 3-point line. When Angel McCoughtry left the game in the first quarter after a slow start, it was those two and the emphasis on getting the ball in to Erika de Souza that kept the game close.

But in a fitting end to the series and the season, the Lynx just had too much firepower with McCarville contributing as both a scorer and facilitator.

Despite a number of good looks for de Souza while McCoughtry was out, McCarville continued to do an outstanding job of pushing the Dream's 6-foot-5 center outside of the paint as she tried to establish position. Rebekkah Brunson had a game-high 12 rebounds on her way to a WNBA Finals milestone. Point guard Lindsay Whalen set the tone in the first half with a number of aggressive drives to finish with 15 points and a team-high six assists, including a game-high 11 free throw attempts. And of course, Maya Moore led a well-rounded team effort with a game-high 23 points as well as 10 free throw attempts to give the Lynx a huge advantage at the line on the road. 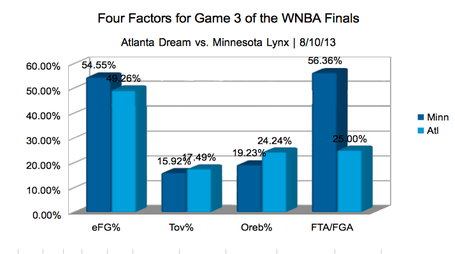 Most importantly, the Lynx had a strong defensive effort as demonstrated by their ability to shut down the Dream's transition attack: they limited the Dream to just 10 points off turnovers and 0 fast break points.

For more on the series, check out our 2013 WNBA Finals storystream.